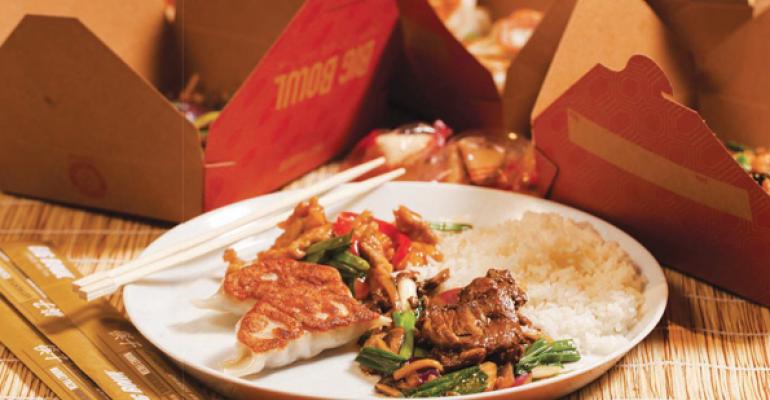 <p>L. Woods offers up its full menu of supper-club fare for takeout, but also Chinese and Thai through an arrangement with Big Bowl.</p>
Operations

Many restaurants are ramping up the fight for today&rsquo;s on-the-go-consumer, but if you&rsquo;re going to offer carryout, you better do it right. &bull; See more Operations articles

Chef Marjorie Druker knows takeout. At age 21, she helped develop the original recipes and menu for a friend’s small restaurant in Newton, MA. Her friend was Arthur Cores and his concept of good, home-cooked foods that could be eaten in or taken out was called Boston Chicken. It went on to become Boston Market and the fast-casual chain now has more than 450 locations nationwide.

But it was 10 years later in 1995 when she really saw the value of quality takeout. Druker and her husband Paul Brophy were new parents and the couple that met in culinary school no longer felt comfortable dining at their favorite upscale restaurants with a young daughter.

“I’m not an Applebee’s kind of girl. I like fresh, fancy food,” says Druker, who saw the need for a concept serving high-quality restaurant food intended to be eaten at home. The couple opened New England Soup Factory outside Boston in 1995, added a second location three years later and another concept, The Modern Rotisserie, 18 months ago. All specialize in gourmet food made mostly to go and the three locations totaled $3.3 million in sales last year.

Druker isn’t alone in her thinking. Carryout has become big business. Quick serve has evolved to fast casual, convenience stores, grocers and big-box retailers have expanded their prepared food options and many full-service restaurants offer at least a portion of their menus for takeout. They’re all chasing today’s on-the-go consumers, who are seeking quick, affordable, healthy and gourmet-quality food that can be eaten at home.

Takeout can be a lucrative boost to your business, but it also comes with many challenges, from packaging, to ordering to balancing dine-in customers with those carrying out the same food. It’s easy to offer, but much harder to perfect. A look inside several operations reveals one common thread: They all take it seriously. Here are their unique approaches, with some ideas and best practices you might be able to borrow.

Obao Noodles & BBQ brings a menu of Thai and Vietnamese comfort foods to customers at three Manhattan locations, but also to neighboring offices and residences through an aggressive in-house delivery program.

The full-service restaurant with 120 seats does about 40 percent of its business from takeout at the new Hell’s Kitchen location, says g.m. Jennifer Saesue, which means the staff is at times juggling as many in-store orders as those carried out.

Orders are placed directly by phone or online through vendor Seamless, soon to be GrubHub Inc., after last year’s merger. As a way to combat high commissions from the digital food-ordering giant—on average 13.5 percent, according to recent analysis after the company’s initial public offering filing in February—Obao encourages online customers to order direct the next time with a 15-percent-off coupon. Another smart marketing move: It also occasionally provides customers with a free treat from Spot Dessert Bar to help tout the new sister concept.

Pad Thai ($8 as a lunch special) and noodle soup dishes ($9-$12) are the most popular items for takeout, Saesue says, which matches research from Food Genius. The tech firm tracking menu data from around the country found those two dishes are on 95 percent of all Thai takeout menus. The two most popular cuisines are Asian and American, both accounting for 27 percent of all takeout.

Saesue’s goal is to have food delivered 30 minutes after the order is received. A team of three people delivering the food and one dedicated packer makes that possible.

Traditional takeout with a twist

L. Woods Tap & Pine Lodge, a casual, hip full-service restaurant outside Chicago from Lettuce Entertain You Enterprises, has a booming takeout business. General manager Terry Lawler estimates 15 percent to 20 percent of the 265-seat restaurant’s revenue comes from carryout and catering and that has grown since June when it began offering takeout from Big Bowl, another LEYE concept well known for its Thai and Chinese cuisine.

“I think having dedicated space is what sets us apart, so takeout doesn’t feel like part of the restaurant,” Lawler says. “It has its own space as opposed to sharing the hostess stand, and we have trained staff to help expedite the process.”

The takeout entrance at L. Woods is in the rear of the building with devoted parking spots for those customers. Inside, a small waiting area seats six and connects through another doorway to the restaurant’s bar. Orders are taken over the phone or digitally by vendor Snapfinger and all go directly into the point-of-sales system and kitchen. The entire menu of supper club fare is available to go, but a separate takeout menu highlights the most popular items and the ones that travel best (i.e., a full slab of ribs for $25.99, sandwiches ranging in price from $10 to $12, and not fish or steaks).

Lawler’s “triple check” system to ensure orders are correct has become a standard at other LEYE concepts with robust takeout offerings. The process begins when the call-in order is repeated back to the customer and then the ticket is double checked in the kitchen when it’s printed. The final step comes when a tray is brought out to the customer. Clear and sturdy packaging makes each part of the order easy to see and confirm while it’s being packed.

“You only have one opportunity to get the order right,” he says. “That and making sure carryout packaging is good speak volumes about how serious you are.”

The unique addition of the Asian takeout menu came with training from the chefs at Big Bowl. A dedicated line cook at L. Woods handles the separate menu using all the same recipes and ingredients as at Big Bowl.

From fine dining to grab and go

“Takeout can’t be a dirty word,” says Nick Schmuck, who left his job as a chef at Charlie Trotter’s to launch Real Kitchen almost three years ago. “It doesn’t have to be substandard food. I think you can push the boundaries further than most restaurants think.” His idea—high-quality restaurant food made to be reheated at home—has proven successful in Chicago and he’s now finalizing plans for a second unit with hopes for more. The idea is simple: He offers a menu that changes weekly with approachable, but elevated comfort foods like Bacon-Wrapped Meatloaf ($9), Roasted Pork and Chorizo with Romesco Potatoes ($9.50) and sides like garlic mashed potatoes ($2.50) or zucchini fritters with tzatziki ($3.50) that he makes from scratch daily.

The majority of the dishes are prepared every morning before opening at 10:30 and packaged, refrigerated and sold later with instructions on how best to reheat them. Real Kitchen also offers a small menu of hot sandwiches and soups and salads, but the bulk of the business comes from the prepared foods.

“Our fan base is broad, from the 20-something foodie who wants something better than crappy takeout, but the real sweet spot is the young working family,” says Schmuck.

Real Kitchen is open until 8:30 and delivers, but Schmuck says he’s busiest with walk-in traffic in the evening when people stop on the way home from work. Customers also visit earlier for hot sandwiches and sometimes take food home for later. Catering, from small parties to weddings, accounts for 30 percent of the business and continues to grow.

Could a restaurant copy his approach? “There are plenty of neighborhood joints that people love, but don’t always feel like going out to,” Schmuck says. “The option to get a favorite dish cold, maybe with a slight discount, to heat at home, would be a great idea.”

Fast casual soup for you

Druker’s New England Soup Factory and The Modern Rotisserie don’t pretend to be full-service restaurants. The fast-casual concepts offer made-from-scratch items that customers wait in line to order. With only 15 seats at the Soup Factory in Brookline and 40 in the Newton space that houses both a Soup Factory and The Modern Rotisserie, takeout is the priority. More than 350 gallons of soup are made daily out of a commissary kitchen at the Brookline unit, along with chicken, sandwiches, salads and sides that are also available in a grab-and-go retail area there. A dozen soups are sold daily with prices ranging from $4.95 for a bowl up to $36 for a gallon.

“Soup is the most forgiving thing in the world,” Druker says of what has made her takeout business successful. Packaging is the most challenging part of the process: “It has to hold up and maintain the integrity of the product from one place to another and the food must be as beautiful and lovely as when it was made.”

The goal, of course, is to provide high-end restaurant fare that can be enjoyed at home without the hassle of cooking.

“I know how difficult it is at the end of the day when you have to go home from work and take care of the family,” Druker says. “You have to put a meal on the table, help with homework and do laundry. Wouldn’t it be nice if you had an invisible chef in your house who could be that liaison to provide good, wholesome and nutritious meals?

“Everyone has a family doctor and dentist, and everyone can have a family cook. I want to be the cook for your family.”

Sixty-one percent of 61 billion restaurant visits are off-premise, meaning they are meals purchased via drive through or for takeout and delivery, according to Bonnie Riggs, a restaurant industry analyst for The NPD Group. Technomic’s latest report revealed 51 percent of consumers order takeout on a weekly basis. 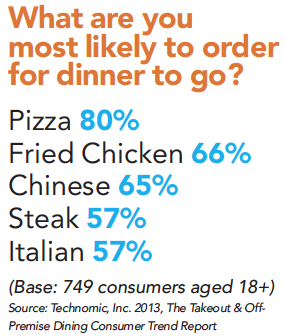 Joe Pawlak, a senior v.p. at Technomic and one of the authors of its Takeout & Off-Premise Dining Consumer Trend Report, says more and more full-service operators see profit potential in takeout. “It’s an opportunity to capture that consumer who may consider a dine-in occasion, and it’s also a way of expanding a restaurant’s business with incremental sales.”

But offering takeout isn’t easy. Many factors must be considered, and even then, some experts believe takeout is a mistake for full-service restaurants. Riggs says both on- and off-premise restaurant visits are flat and that many of the casual-dining chains that were really pushing takeout prerecession are no longer as focused on it.

“In today’s marketplace, dealing with this very controlled-spending customer, I’d rather have that person in my restaurant as opposed to that person ordering takeout from me,” she says. “You have to devote labor to it, packaging, the check average is lower without beverages, the food doesn’t travel as well—there are a lot of negatives. I’d focus those energies and resources into driving on-premise visits.”

But that’s tough to do when one-third of adults agreed that “purchasing takeout food is essential to the way they live,” according to the Restaurant Industry Forecast from the NRA. If done right, Pawlak says full-service operators can boost business by 10 percent. The trick is doing it in a way that doesn’t affect the 90 percent dining in.