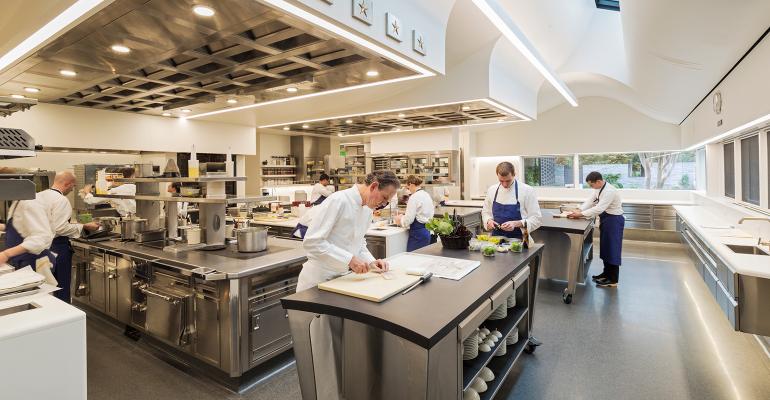 True blue: The French Laundry honors its origins as it marks 40 years

The French Laundry completed its extensive renovation of the kitchen and courtyard last year. But one feature that did not change is the restaurant’s iconic blue door.

The color is meant to evoke the original kitchen when The French Laundry in Yountville, Calif., first opened as a restaurant in 1978. It was then owned by Sally and Don Schmitt, a couple who ran the restaurant for about 16 years before the then-young chef Thomas Keller bought the stone building in 1994. Sally Schmitt was one of the early pioneers of California cuisine, said Keller in a Facebook post commemorating the restaurant’s 40th anniversary in February. Keller initially used her kitchen, which was “minimalist in design but felt very much like a home kitchen, and that was Sally’s intention,” he wrote.

Above her stove was a blue hood, which Keller said was uncommon at a time when most hoods were stainless steel.

When he closed the restaurant for renovation and the original kitchen was demolished, Keller said he realized there would be nothing left of Sally Schmitt’s history.

“So I decided then and there to paint what was then the kitchen door, which would become the front door, blue in commemoration of Sally’s kitchen,” he wrote. “And now, the blue door that connects us to Sally’s kitchen represents all that is The French Laundry.”