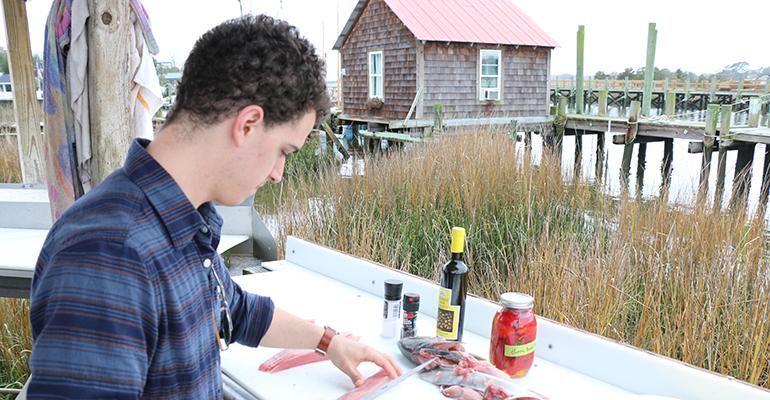 While many Americans will be watching the solar eclipse on Monday, Boston restaurateur Chris Himmel and his employees will be flying across the country for a 10-day working road trip.

It’s a notion that a growing number of restaurant companies are investing in: staff enrichment programs that involve travel, exploring other restaurants and meeting purveyors to have a better understanding of the food they serve.

Denver-based Sage Restaurant Group has gathered chefs, general managers and executives in the Napa Valley, the Pacific Northwest and along Kentucky’s whiskey trail in recent years.

Because the group’s restaurants are all over the country, this year team members will gather in Denver for “Camp SRG,” in late August, where they will explore Colorado’s heritage grains, barbecue and breweries, according to Meaghan Goedde, Sage’s director of training and talent, in a recent newsletter.

In September, Manresa owner David Kinch will bring a team from his Los Gatos, Calif., restaurant to France, where they will cook and collaborate with chefs at Le Taillevent in Paris, L’Oustau de Baumanière in Provence and Le Petit Nice in Marseille. Dubbed “The Residency,” the tour also celebrates Manresa’s 15th anniversary and is a collaboration with the Relais & Châteaux group of luxury hotels and restaurants.

For Himmel, owner of Himmel Hospitality Group in Boston, it’s the second year for the trip, which he plans to make an annual event.

In Boston, the group operates the wine-focused steakhouse Grill 23; the upscale urban tavern Post 390; and the 40-year-old restaurant Harvest, a pioneer in the farm-to-table movement.

Last year, the crew drove from Boston to the West Coast in an RV, zig zagging about 6,000 miles over the course of three weeks. Meeting suppliers, like those at Brandt Farm in California, face to face gives restaurant teams a better understanding of the quality of ingredients their serving, said Chris Himmel.

This year, the “Himmel Hits the Road” trip will focus on the Pacific Northwest, flying into Seattle and renting an RV to drive down to the Napa Valley in California.

Along the way, they plan to visit breweries and distilleries, go salmon fishing, and meet with suppliers like Island Creek Oysters, Taylor Shellfish and Dogpatch Farms.

“It gives the chefs an opportunity to meet these people face to face,” Himmel said. “We have some chefs that have never been to the West Coast.”

And a team from Grill 23 plans to recreate the restaurant in the fields at Larkmead Vineyards in Calistoga, Calif., with help from suppliers Brandt Beef. Earlier this year, Grill 23 won a Grand Award from Wine Spectator magazine.

Among the guests who plan to attend the Larkmead Vineyards event is chef and restaurateur Thomas Keller, a friend of the Himmel family.

Grill 23 was founded by Chris Himmel’s father Kenneth Himmel, who is also president and CEO of Related Urban, which is developing the Hudson Yards project in New York.

Keller is curating the food and drink outlets for Hudson Yards. Chris Himmel said he is also involved with the Michael Lomonaco restaurant planned for the massive real estate project.

For Himmel Hospitality, the goal of the road trip is to inspire and excite the restaurant teams, Chris Himmel said.

“My goal is for them to come back with a renewed sense of energy and enthusiasm for what they do,” he said.

The teams will include a mix of front- and back-of-house employees. They will stagger participation so the restaurants in Boston can remain open during the two weeks of the trip. None of the chefs or GMs will be gone longer than four days, Himmel said.

The restaurant group covers travel costs, and some funding comes from Chris Himmel personally, he said. Last year, the trip cost about $35,000, and this year he expects it will be about $25,000.

Although the logistics of moving groups of people across the country and planning events on the road has been a challenge, Chris Himmel said it’s worth it.

“Sometimes you feel like a tour-guide operator, handing out room keys,” he said. “But last year was one of the best times I’ve ever had, professionally and personally. You really get a lot of great ideas.”