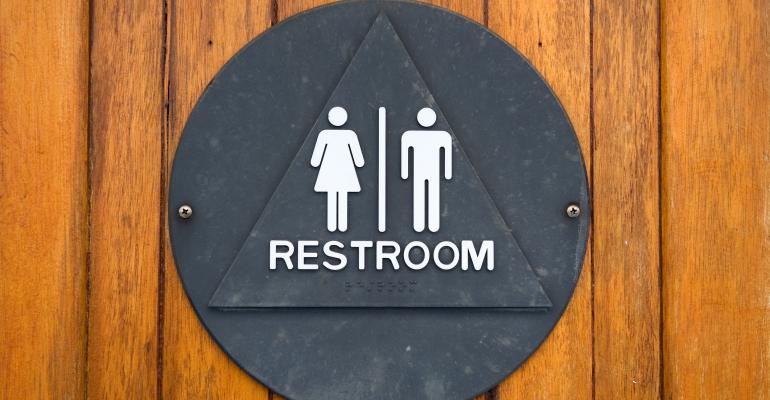 Single restrooms in California must be designated ‘all gender’

As of March 1, businesses with single-user bathrooms are required to designate them as “all gender,” or unisex, with signage indicating they are accessible to anyone.

The rules are a result of the Equal Restroom Access Act, or AB 1732, signed by Gov. Jerry Brown in September. They apply to all businesses where restrooms are public with the goal of easing access for transgender people.

The rules, however, do not require businesses to have transgender bathrooms, said Aaron Colby, an employment attorney with Davis Wright Tremaine LLP in Los Angeles.

The requirements only apply to restroom facilities designed for use by one person at a time, in which there is a lock on the outside door.

Many small business, in particular, have single-user restrooms designated as “men’s” or “women’s,” but that would be no longer allowed.

The rules, however, would not apply to a bathroom with two or more locking toilet stalls, if the outside restroom door does not lock, because it would not be considered a single-user facility.

In addition, restaurant operators must post compliant signage, with a triangle on top of a circle to indicate all-gender, both on the door and next to the door.

Colby noted the signage requirement could frustrate restaurant operators that have restroom signs more in line with their branding or theme, but the specific double-signage is necessary.

“A lot of restaurants don’t like to hear that because it’s ugly and not always feasible,” he said.

Noncompliance, however, may be a violation of building codes, and inspectors are likely to be looking for it, he said.

President Trump in February reversed a federal directive instructing public schools to let transgender students use bathrooms and locker rooms of their chosen gender. The president at the time argued the issue was best handled at the state and local level.

North Carolina lawmakers approved a controversial bill in 2016 requiring transgender people to use restrooms that correspond with their birth certificates.

In the 2017 legislative session, 14 states have introduced bills having to do with gender bathroom access, though most are specific to public schools, according to the National Conference of State Legislatures. Of those, however, proposals in South Dakota and Virginia failed to pass.

Bars and restaurants get creative with drink sales in the wake of coronavirus pandemic
Apr 07, 2020