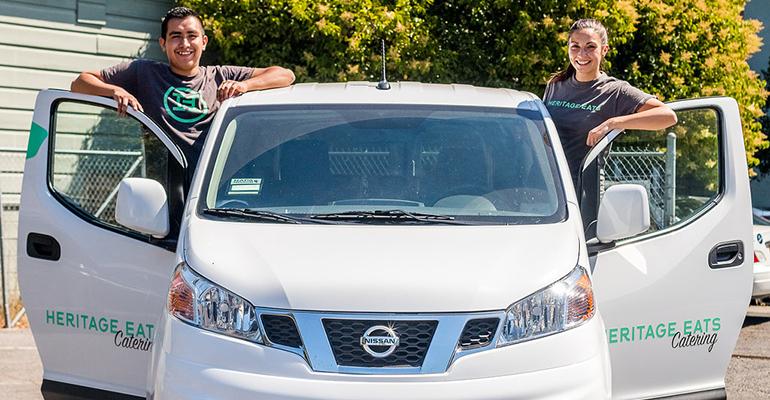 Where once restaurant delivery focused on the stalwarts of pizza or Chinese food, now high-end restaurants are being dragged, sometimes reluctantly, into the on-demand economy.

Advocates see only blue-sky opportunity ahead. The trend can help restaurants expand their revenue potential beyond their four walls, they say. And time-starved consumers are willing to pay for the convenience.

That may be true, but restaurant operators say it’s still a tough choice. They worry about packing their thoughtfully developed food into plastic tubs and handing it over to independent contractors who may not be invested in representing the restaurant brand well.

Independent restaurants are left torn between dedicating resources to the diner experience or delivery operations.

Andrew Burnham first started offering delivery service from his New Orleans-inspired restaurant The Bywater about six months after it opened in early 2016.

The 55-seat restaurant in Los Gatos, Calif., was a hit, and was packed every night. Initially, Burnham, who is also an owner of high-end restaurant Manresa in Los Gatos, hoped delivery service would bring in some business during slower periods.

Fearing delivery might hurt dine-in business, at first he only offered one option, a dish not found on the regular menu. The Bywater now makes about half of the menu available for delivery through third-party provider DoorDash, and much of that business comes in at peak times, rather than the off hours Burnham had hoped to invigorate.

Like many operators, Burnham has mixed feelings about the growing trend of delivery that has been fueled by the rise in Uber-style third-party services, from Grubhub, Postmates and DoorDash, to Amazon, UberEats and Caviar, just to name a few. Most major U.S. markets have at least one of the players, and their geographic reach grows daily.

For Burnham, The Bywater will remain focused on the experience it offers dine-in guests: the food, the atmosphere and the music. But he acknowledged that delivery meets the need of a certain customer looking for food as fuel, a customer that wouldn’t be dining out anyway.

“Delivery is never going to be big. It’s a single-digit increase incrementally,” he said. “But I feel like food is going in two directions: either it’s about the experience, or it’s about basic blocking-and-tackling of nutrition, which guests may enjoy at home. I think restaurants that toe the line and don’t do either of those things well, or a little of both, will struggle.” Across the country, it’s hard to ignore that diners have embraced the notion that a wealth of quality restaurant food is now available for delivery with the tap of a smartphone or click of a mouse.

Restaurant chains are racing to jump on the delivery bandwagon, making significant investments in digital ordering platforms and operational enhancements to support delivery.

In a January report, market research firm The NPD Group  predicted that restaurant traffic in 2017 will remain stalled, but full-service restaurants in particular have an opportunity to build sales with delivery.

The multi-concept operator recently launched delivery service for the first time at its restaurants Blue Smoke and North End Grill, both in Battery Park City, as well as Marta in Manhattan, all using the third-party provider Caviar, which tends to focus on higher-end, full-service restaurants.

It’s something the group thought long and hard about, said Maureen Cushing, USHG’s vice president of information technology and processes.

“Do you go there, or do you not go there? I think our guests are asking for it,” Cushing said.

Fundamentally it’s part of a broader cultural shift toward online ordering, she added.

“It’s incredible where we’re going,” Cushing said. “I have two young children and they think things just automatically appear at the door. It’s not just food. It’s anything you could possibly need. It’s amazing and kind of scary at the same time.”

Still, even those who are embracing the trend have trepidations, saying it’s not right for every concept.

Ryan Cole, partner in San Francisco-based Hi Neighbor Hospitality Group, said he sees it from both sides, as a consumer and as a business owner.

“For me, as a consumer, delivery is a great luxury,” Cole said. “Before I leave the office, I’ll go online and order something for delivery and then meet the delivery driver at my door when I get home.

“But as a restaurant operator, I know that my food might not be what I want it to be when it gets to you,” he added. “It’s great to have the incremental revenue, but not at the expense of the perception of my brand.”

Within the Hi Neighbor group, which operates five restaurants, only the concept Fat Angel offers delivery through UberEats, which Cole said is the fastest service he’s worked with so far in terms of moving food from point A to B.

“It’s not nothing,” Cole said. “Would I create a business around that? No. Is it nice to have supplemental income? Absolutely.”

Over the past few years, Cole has worked with several providers. He has watched the delivery space evolve. Most use the basic model of charging merchants a commission, while consumers pay a service charge, although the amount of both varies.

Providers like Postmates pick up from Fat Angel if guests request it, even though the restaurant has no formal relationship with the delivery company. It’s something Cole is not sure he can control.

Cole only offers delivery at one restaurant because the food at Fat Angel is more likely to travel well, and the restaurant is accessible. Drivers can double park out front for pick up, and it’s easy to find on a map.

Customers who order delivery from Fat Angel are likely already fans of the concept, so they are more likely blame UberEats for any problems, and not the restaurant, he said.

But at the group’s other four concepts, Cole doesn’t think delivery will work logistically, either because of menu or access.

Cole sees rocky times ahead for the delivery market as it grows and settles, especially given increased competition from services that deliver meal kits and even groceries. Investors that once seemed willing to hand over cash in wheelbarrows to delivery startups appear to be calming down with more-grounded valuations.

“Fundamentally, the third-party guys have to make it work as a business model,” Cole said. “When they first started doing it, they were discounting so much because they needed the restaurants to participate. We made a lot of money off it, and that was great. But they lost money.

“I just think somebody’s going to have to figure it out or they’re all going to go under,” he added. In Cleveland, where UberEats recently joined SkipTheDishes as a third-party delivery service, David Kocab is a believer.

Kocab is the chef of Restaurant Trentina, one of three restaurants owned by Jonathon Sawyer that all offer a limited menu for delivery through both third-party services there.

For their group, it was about the marketing opportunity of being listed on delivery websites, he said.

Kocab admitted to initially have an “old-school mentality” in which he wasn’t thrilled about doing to-go food. But the response from customers has been positive.

“If we were seeing Yelp reviews where things weren’t up to par, that would be one thing, but that isn’t the case,” he said. “I think the pros outweigh the cons.”

The seven-unit Greenleaf Gourmet Chopshop salad chain in Los Angeles began offering delivery with its own cars, driven by the restaurant staff, when it opened the first unit in 2007.

“It became a big driver for us and we were able to generate some numbers off that,” said Jon Rollo, chef and owner. “But there are a lot of barriers.

“It’s something our insurance company hated, and it cost just as much to insure a bike delivery guy as a car,” not to mention the stress of potential accidents or traffic tickets.

As the fast-casual chain grew, the cost of car payments, insurance and mileage became untenable, Rollo said. So Greenleaf gave up the fleet, except for catering trucks, and shifted to using DoorDash, Uber, TaskRabbit and Postmates for delivery.

The commission costs were easier to stomach, he said, and it fueled another opportunity: grab-and go.

Greenleaf had been building a packaged-meal business through other like-minded outlets, like Equinox gyms, juice bars and specialty grocers throughout the greater Los Angeles area.

Food goes out to about 60 outlets daily, and now he can supply those outlets using DoorDash drivers, thanks to a new feature that allows merchants to use the service in new ways, Rollo said. Rollo’s restaurants see 30 to 40 delivery orders from customers every day, which is not insignificant.

“People understand the value of that service,” he said. “It’s definitely something this next generation of consumer is spending money on.”

Delivery from day one

Emerging concepts are building delivery into their DNA from day one, even designing menus to only include food that travels well.

Catering already accounts for about 10 percent of the restaurant’s revenue, he said, so the investment in a vehicle was justified. Adding delivery expands the potential of the investment, he said.

There’s a minimum for delivery orders of $30. But Koenig has designed a “family eats” menu priced at $12 per person, with a choice of tortillas, bao or pita; trays of hot proteins; and salads and sauces.

This year, Koenig plans to open a second location in the San Francisco Bay Area, with a third and fourth to come next year. Delivery will definitely be part of the plan, and hopefully with third-party providers involved, he said.

“In more dense markets, the luxury of having third-party services to facilitate the process is hugely beneficial to a small brand like mine, and it will be part of the strategy,” Koenig said. “And our strategy is to do whatever we can to get our food out there.”