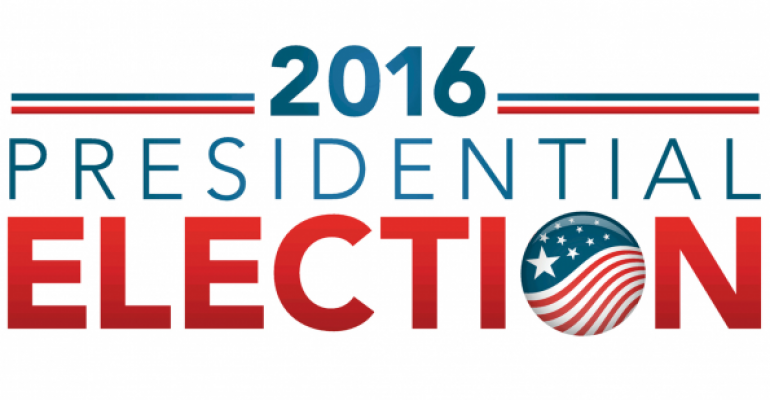 In what may be the biggest upset in recent U.S. history, real estate mogul and Republican nominee for president Donald Trump was elected to the country’s highest office on Tuesday, though results from several states remained outstanding at press time, according to MSNBC.

A top business question for the restaurant industry remains whether consumers will feel confident about spending money again once the clouds of the campaign have cleared.

Democratic candidate Hillary Clinton conceded the race with a call to Trump around 2:40 a.m. Eastern time. Trump passed the required 270 electoral votes with MSNBC calling tight swing states Pennsylvania and Wisconsin for the Republican, giving him a total of 278 compared with Clinton’s 218. Results of the national popular vote may not be known for some time as vote counts vary across the country.

In a statement, Bill Phelps, co-founder and CEO of Wetzel’s Pretzels, said raising the minimum wage is good for the bottom line.

“We’re encouraged by these state raises, and look forward to continued growth for our business and the economy with future state and federal raises,” he said.

The Trump win makes the increase of the federal minimum wage less likely.

Gregg Majewski, a Jimmy John’s franchisee with units in Ohio and Alabama and several other concepts, was optimistic on Twitter, predicting a Trump win would result in lower health care costs and relax salary requirements.

Minimum wage rates will still increase, but at a fair rate, Majewski said in a tweet.

@livetodineout health care cost and salary requirements will be relaxed. Min wage will still increase but at a fair rate. Overall positive

Still, he added, “No matter who won next 8 weeks would be good as people wanted election over.”

On social media, reactions to Trump’s victory from those in the restaurant industry ranged from elation to disappointment as the evening unfolded.

New York chef and restaurateur Andrew Carmellini, on the other hand, tweeted “Bigotry and misogyny have won.”

Erik Oberholtzer, co-founder of the Los Angeles-based Tender Greens, said he planned to offer comfort at a time of dysfunction, “adding sugar to a sour outcome.”

In a report, Wall Street analyst David Tarantino, senior research analyst with Baird Equity Research, said the “uncertain and highly combative election cycle” has been one of the main factors weighing on consumer spending in restaurants over the past seven months.

But, he wrote on Monday when a Clinton presidency seemed certain, “With the potential for some of the negative sentiment to begin to abate following Tuesday’s election, we will be looking closely for any signs that underlying demand is starting to return.”

After his historic win, Trump thanked Clinton for her service to the country, and said it was time to heal the wounds of division.

“It is time for us to come together as one united people,” Trump said. “I pledge to every citizen of our land that I will be President for all Americans, and this is so important to me.

“For those who have chosen not to support me in the past, of which there were a few people,” he added, “I’m reaching out to you for your guidance and your help so we can work together and unify our great country.”

Both the U.S. House of Representatives and the Senate remained under Republican control.