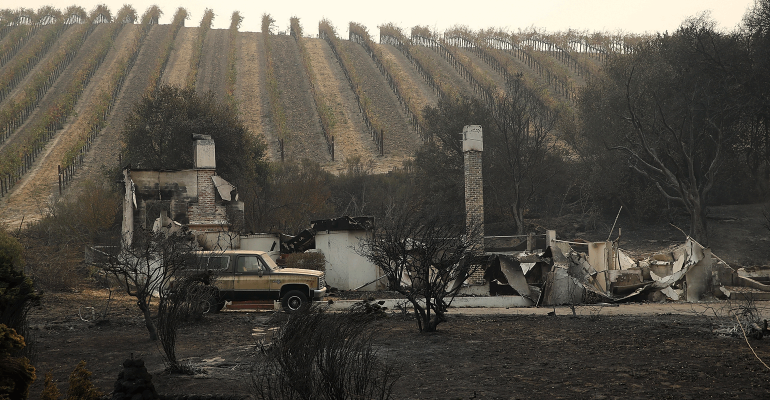 Damage to wineries still being assessed, but most grapes already harvested and safe

Firefighters continued to battle blazes across Northern California on Wednesday as the wine industry struggles to assess the damage to one of the nation’s richest grape-growing regions.

At least 21 have died since Sunday as a result of the fires, which have burned nearly 170,000 acres as of Wednesday morning, according to the San Francisco Chronicle. Residents were still being evacuated in some areas as gusty winds continued to push the flames in Sonoma, Napa and Solano counties.

Reports indicated that a number of wineries had been destroyed, but the chaotic situation has left many unable to reach their properties to fully assess the damage. With mobile phone and internet access spotty, many turned to Facebook to offer minimal updates.

Signorello Estate in Napa, for example, on Facebook posted a notice saying the winery was destroyed, though employees were safe.

Ray Signorello Jr. wrote that he has not been able to access the property to fully survey damage.

“The 2015 vintage of red wines and 2016 vintage of white wines were safely stored off the property in American Canyon,” he wrote. “Please keep our colleagues in the wine industry and everyone who has been affected by these tragic fires in your thoughts and prayers.”

Paradise Ridge Winery in Santa Rosa also posted on Facebook that its winery had burned down, but pledged to rebuild.

“All the Byck family and Paradise Ridge team is safe — Our hearts go out to all who have lost their homes and businesses. We are strong and will rebuild,” the post said.

Nicholson Ranch Winery in Sonoma was also eager to dispel reports that the vineyard was damaged. On Facebook, the winery posted that the ranch staff was safe.

“The winery was in the path of the fire but escaped being engulfed by the flames,” the post said. “We have some damage to fix. The wine is secure in our cellars. We are cleaning up and hoping to have the power back on this week.”

Likewise, William Hill Estate and Stags’ Leap Winery, both in Napa, also reported limited damage, but noted that fires were ongoing and it was difficult to give a full assessment.

Wine producers in the region were expecting a high-quality vintage crop this season. A winter of record rainfall and a mild spring helped growers cope with a scorching summer that followed.

If there was a silver lining, it was the timing of the fires, said Michael Honig, president of Honig Vineyard & Winery in Napa and chairman of the Napa Valley Vintners trade association, which has 539 members.

“The vintage was exceptional this year, so we’re excited about what we have in the barn,” he said.

What remains in the fields are primarily cabernet sauvignon grapes, which have a thick skin and will not likely suffer from smoke taint, he said. “Had the fires occurred earlier, in May or June when the grapes were just starting to form, it would have had more impact.”

Product from the recent harvest is typically stored in barrels or tanks that are impermeable and protected from smoke. So only vineyards that had lost structures where wine was stored on site were likely to see loss of product.

Among association members, it was too soon to tell the impact, Honig said.

“We’ve heard about five of our members have sustained major damage. And about nine have had some structural damage, but we’re not releasing specific names,” he said. “We’re just in the middle of this. We’re barely getting information from first responders, because they’re focused on getting the fires contained.”

Honig said was also too soon to speculate whether there might be an impact on wine pricing, but he noted that the industry is not as vulnerable to such events as other industries might be, given it takes time for wine to develop. Currently, for example, Honig is selling its 2014 cabernet.

“Right now, we’re focusing on getting our members safe and our community back,” he said.

And, as farmers, Honig noted that wine growers are a resilient bunch, having weathered major disasters many times in the past, whether drought, earthquakes, pestilence or prohibition.

“We’ve survived it all and come out strong,” he said.