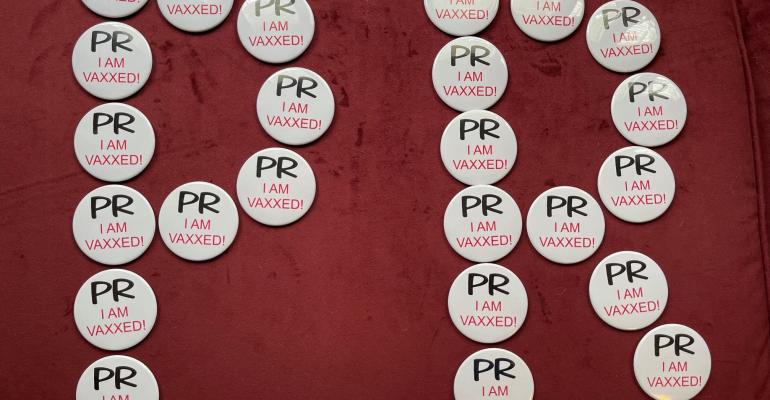 Players Retreat
Vaccination proof buttons that the restaurant handed out to guests.
Operations

Now, 1 in 49 Raleigh residents owns an “I’m vaccinated” button from The Players Retreat

When the Players Retreat — a 70-year-old sports bar/restaurant in Raleigh, N.C. — announced on the local radio station in May that they would begin enforcing a vaccine mandate for indoor dining, within the hour, there were hundreds of comments on the radio station’s website criticizing their decision complaining, “no one’s going to come to your restaurant.”

Three months after implementing the vaccine mandate at the end of June, their gross sales are up 9% from 2019’s pre-pandemic numbers.

“We’re trying to provide a safe environment from COVID,” Players Retreat owner Gus Gusler said. “People feel safe coming here because they see no one is getting sick. […] Customers call me up to say, ‘thank you for doing this because this is the only place we go out to eat and we actually feel normal again.’”

The Players Retreat first closed its doors in March 2020 and Gusler made the decision to stay closed throughout most of the pandemic because he did not want his staff risking their lives while he and his wife, Doris — who suffers from COPD — quarantined before the vaccines were rolled out. Once he and his wife were vaccinated in February, they came up with a plan to reopen, deciding to require vaccines for all staff and only serve unvaccinated people (including ineligible children under the age of 12) outdoors.

Before they reopened with the vaccine mandate in effect, Gusler said they completely renovated the restaurant, knocking down the fourth wall and adding folding glass walls to allow for more air circulation and outdoor seating. They also installed new air filtration technology as part of their HVAC system. As of September, the Players Retreat is operating at 100% capacity.

One of the biggest challenges, Gusler said, was figuring out how to check people’s vaccination proof without creating a long line to get in. Before opening officially on June 23, the Players Retreat decided to partner with a walkup Pfizer vaccination clinic. People could get vaccinated or show proof of vaccination before June 23 and receive a “PR: I’m Vaxxed” button which they could wear as proof of vaccination when they dine at the restaurant. Everyone that got vaccinated as part of the program also received a $25 gift card to the restaurant.

“I originally was going to order only 500 of the buttons and then we settled on 1,000 but we went through 1,000 real quick,” Gusler said. “After that first day, we had someone outside registering people for three weeks from 4-7 until we opened.”

As of right now, more than 10,000 people have registered their vaccination with the Players Retreat – that’s more than 1 in 49 Raleigh residents that have received a “PR: I’m Vaxxed” button.

“I’d like to take credit for some of that,” Gusler said, “but most of our clientele would have probably gotten vaccinated anyway. […] But maybe some people were tired of eating curbside and this was the final push to get vaccinated as soon as they could.”

Of course, the process was not entirely smooth. Gusler said that they’ve had a few incidents of people pushing back against their stringent policies, including once when he was assaulted by a potential customer outside of the restaurant. He almost had to get the police involved after a passerby was knocking over ketchup bottles on the outdoor tables, loudly criticizing their vaccination policy, and refused to leave.

But for the most part, Gusler said, the community has been very supportive, especially their employees. When they first opened, like many in the industry, they were struggling to find staff. But as word got out about their strict safety policies — and after Gusler increased wages to $15 per hour, along with vacation and health benefits — they are now fully staffed and have more applicants than they have room for.

“I've had several [other restaurant owners] tell me they wish they had done what we did from the beginning,” Gusler said.