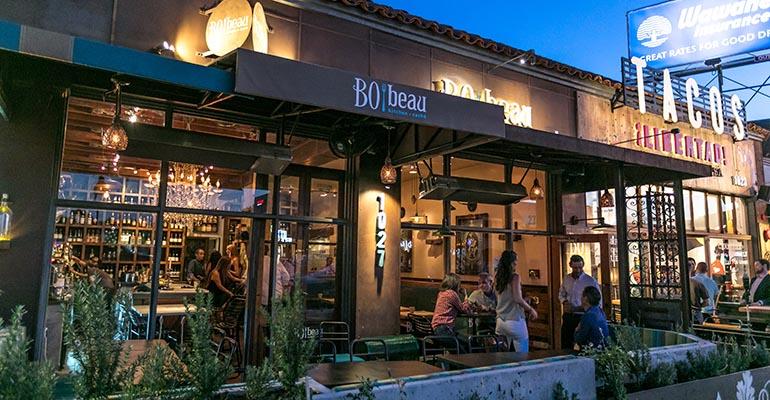 The more, the merrier

The adage that “two can live as cheaply as one” is being put to the test by operators around the country who are combining two, three or more concepts into a single space to optimize efficiencies, drive traffic and minimize risk.

Opening multiple concepts within a single space — or in adjacent spaces with shared back rooms — allows operators to spread the costs of occupancy and high-ticket equipment across multiple revenue streams. It also creates opportunities for shared labor, procurement and other efficiencies that can enhance overall profitability.

Operators say such arrangements also allow for the ability to experiment with new concepts in one restaurant, while the co-located concept or concepts drive revenue.

“I think one of the biggest advantages is that you actually have more chances of succeeding,” said Kash Feng, owner of Omakase Restaurant Group, which operates the acclaimed Omakase and Okane concepts in a shared space in San Francisco. Before Feng decided to pair the high-end Omakase restaurant with the casual Okane, he tried pairing Omakase with a healthy, fast-casual Asian concept called Origami Market. Although he received positive feedback on Origami Market, Feng decided it was priced too high for the market he was trying to reach.

So, after three months he replaced it with Okane, a Japanese gastropub serving what it describes as traditional and refined Japanese comfort food and contemporary sushi.

“The fact that Omakase was successful allowed us to do that,” Feng said. “It allowed us to take our time and think of another concept.”

In addition to sharing the occupancy costs that otherwise would have been borne by a single restaurant, Omakase and Okane are able to make common use of some back-of-the-house facilities, including the office, product storage, dishwasher and employee restroom.

All employees are cross-trained at Omakase and Okane so that they can fill in for each other in emergencies, but Feng said the co-location arrangement doesn’t really provide opportunities for labor efficiencies because of the differences between the two concepts.

“In the end, it’s not about saving labor,” he said. “It’s really about creating additional outlets for revenue.”

Still, the managers of each concept are capable of filling in for each other.

“I cross-train the managers, so whenever there’s a problem, there’s one person who knows it all,” Feng said.

Now Feng is planning to take the multi-concept approach to another venue, with the planned opening of an udon noodle shop, a Japanese steakhouse and Japanese Wagyu butcher shop in a shared space within the planned One Henry Adams condo development in San Francisco.

“All of the back of the house will be connected and shared,” Feng said.

Other operators who have combined multiple concepts within a single venue cited management and labor savings key benefits of the multi-restaurant arrangement. “The reason we did it was to share our resources in every way — to share staff, to share our equipment, and to cross-utilize staff when there’s downtime in one area and they are needed somewhere else,” Comer said.

Each of the concepts at Morehead Foundry has its own entrance and seating, but storage, dishwashing, laundry, restrooms, the office and some kitchen space are all shared. The venue includes a bakery, a contemporary Southern restaurant, a speakeasy and a fast-casual burger concept.

Having multiple concepts allows guests to choose from multiple experiences, or even to split up and enjoy multiple experiences separately. Parents might prefer to dine at Four Flocks and Larder, the more upscale Southern restaurant, while the kids go to Revolution Burger.

Combining the concepts in a single location allowed Comer to invest in better equipment, she said.

“We were able to put a commercial-grade laundry facility in there, which in theory is going to save us a lot of money instead of outsourcing,” she said. “The same goes for the dish room. We put in a massive dish room to service all the concepts, so we were able to get better and faster equipment.”

A single employee can handle dishwashing for the entire facility, Comer said. Dishes, glassware and utensils are collected in color-coded bus tubs and racks to separate them for washing.

Other high-cost equipment, such as walk-in coolers and the hood ventilation system in the kitchen, are also shared among the different concepts.

Comer is also able to save on management salaries. Instead of having one manager for each concept, Morehead Foundry has one general manager who oversees the entire operation. Support functions that might otherwise have been outsourced, including administration and marketing, were also brought in-house.

Comer is still working out a solution for sharing procurement and inventory across the concepts, but she sees the potential for savings in that area as well. She said she’s willing to “muddy the waters” in terms of accurately attributing food costs to individual concepts in exchange for more efficient use of resources.

“I would rather have less waste than worry about who paid for a case of tomatoes,” she said.

Cross-utilization of labor is another ideal Comer is striving toward, but has sometimes found difficult to achieve. Employees are cross-trained to work in multiple concepts, but that style of work requires management oversight to ensure that people are actually pitching in where they are needed.

“I think people by nature just want to have something clearly defined,” Comer said. “It’s on management to make sure that everybody is remembering what they are supposed to do.”

“Like everyone, we are struggling to find great team members, but this allows us to give people more hours and make sure that everyone is fully employed,” he said.

Cohn’s newest such venture combines three different concepts — his signature BO-beau bistro concept, a speakeasy called Caché, and a not-for-profit taco eatery called Tacos Libertad, which donates 100 percent of profits each month to a different charity. The concepts share receiving areas and storage, as well as ware-washing and prep areas. Each concept has its own cooking lines. “There are certainly economies of scale and synergies among the different concepts, and there’s the whole idea of creating something more than a dining experience — the idea that there’s something to do after or before dinner,” Cohn said.

Diners can visit Caché, which is open until 2 a.m., after dinner at BO-beau, for example.

Like Morehead Foundry, Cohn has one general manager to oversee all of the concepts.

Cohn, whose company operates 24 restaurants under 19 different concepts, said he’s always on the lookout for additional opportunities. He’s currently eyeing the possibility of combining bowling with a restaurant.