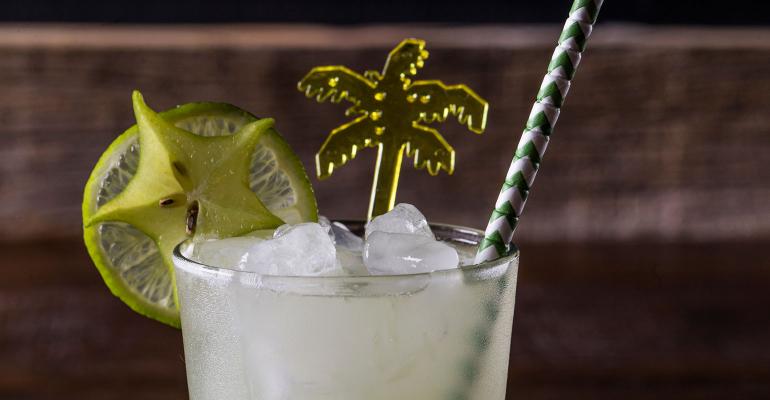 Eduardo Benini Fotografia
Paper straws from Aardvark Straws are biodegradable and can be composted, according to the company.
Operations

Operators seeking to reduce their environmental footprint often look to innovative technologies such as solar power and sustainable building materials, but one simple solution can be found — quite literally — right under their noses.

U.S. consumers use about 500 million plastic straws each day, many of which end up polluting the environment, according to Lonely Whale Foundation, an environmental group that encourages consumers and the foodservice industry to “stop sucking” on single-use plastic straws.

Operators that have experimented with reducing plastic straw use have found that doing so can present some challenges. Most paper straws don’t have the structural integrity to replace plastic for many beverages, and customers often prefer to use a straw, even when they are encouraged not to. “Really, there is no purpose for a straw,” said Jamie Martin (left), owner of Market Buffet BBQ & Smokehouse in Barrie, Ontario. “We’re just used to having it.”

In January, Martin united with a group of other operators in his area for a “no-straw challenge” in which the restaurants eliminated the use of straws completely in January and February. He has since begun providing straws by request only. Servers explain to straw-seeking customers that the business is trying to reduce waste and help protect the environment. “Most people are receptive,” Martin said. “There are a few who just want a straw no matter what, and we don’t deny them a straw.”

He estimated that the restaurant has cut its straw use in half since he launched the effort at the start of the year.

Martin is currently exploring biodegradable paper straws, but he expressed concerns about their cost and durability.

Freehold Brooklyn — a combination gastropub/lounge/coffee shop/event space in Brooklyn, N.Y. — is one example of a venue that has successfully converted to paper straws. Brice Jones, a partner in Freehold, said the company is on course to break even next year, despite the higher costs.

After using 1.5 million plastic straws in 2016, Jones at first estimated that switching to biodegradable paper straws would increase his costs by $27,000 annually. He said he’s been able to mitigate a cost increase by offering straws by customer request only on Sunday through Thursday, and by negotiating a good price with his paper-straw supplier.

“On the busier nights, it’s harder to convince people they don’t need a straw when there are four people waiting for a drink,” Jones said. “On a Tuesday or Wednesday, it’s a lot easier to have that conversation.”

Freehold pays 3 cents per straw for the paper straws from Fort Wayne, Ind.-based Aardvark Straws. They are biodegradable and can be composted, according to Aardvark.

Plastic straws, meanwhile, cost less than a penny per straw, according to Jones. He said Freehold could reach the break-even point on straw costs next year if the company can continue to cut down on straw use.

Jones said his employees — “Brooklyn-based Millennials that they are” — have embraced the concept of discouraging customers from using straws. Freehold also displays signage describing its efforts to reduce straw use and its support of the Lonely Whale Foundation and the Oceanic Society.

“This is not a trend; it is the new standard,” Jones said.

Catherine Greener, VP of sustainability at Xanterra Parks & Resorts, which operates restaurants, cafeterias and other hospitality facilities in national and state parks around the country, launched an effort to reduce straw use in 2013, and refreshed the initiative this year with a new slogan: “Choose to be straw-free.”

“We just want to see a significant decrease” in straw use, she said. “But really, in the end it is about people making their own personal decisions.”

Xanterra uses a combination of collateral materials, including buttons worn by employees and signage at self-serve straw dispensers, to encourage customers to think twice before taking a straw.

“We will probably always have some straws on a limited basis, for people who do need them, like small children,” Greener said.

In a sign that the straw-free movement is gaining momentum, in September, several foodservice venues across Seattle vowed to offer sustainable alternatives to plastic straws for a “Strawless in Seattle” campaign.

Tom Douglas Seattle Kitchen, which operates multiple restaurants in the area, is using the campaign to kick off an effort to eliminate plastic straws and offer biodegradable straws only upon request.

“Tom Douglas Restaurants has basically decided to stop sucking!” said Tom Douglas, owner. “The problem of plastic in our oceans and eventually into our food system is almost immeasurable. We decided that a great place to start tackling this issue is with a simple idea that is easy to get behind, reasonable in its approach and can be worked on by everyone. Strawless in Seattle is a fun answer to a serious problem.”

“Plastic pollution is one of the biggest threats to our oceans, and straws are one of the most common plastic items found in beach cleanups,” said Sondhya Gupta, campaigner at SumOfUs, which previously has pressured several restaurants chains to source “100-percent responsible” palm oil. Martin of Market Buffet BBQ & Smokehouse said it may be impossible to completely eliminate straw use in foodservice.

“Ultimately the goal would be to eliminate straws altogether,” he said. “But I think we will always have straws on hand. I just want to keep educating customers about the impact on the environment.

“At the end of the day, this is a service industry, and if someone wants something, we have to provide it.”