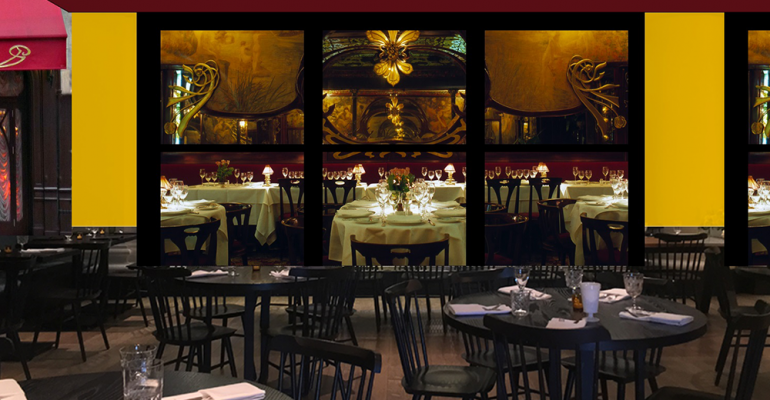 Currently on exhibit at The Brooklyn Museum, “Pierre Cardin: Future Fashion,” is an extensive display of the French couturier’s body of work including his futuristic pieces from the 1960s, ‘70s and ‘80s as well as rare designs from the 1950s. The Norm, the Brooklyn Museum’s restaurant, has been transformed into a tribute to Cardin through the restaurant in Paris he owns: Maxim’s de Paris, a Parisian institution where the rich and famous have mingled for more than 120 years.

It’s not the first time The Brooklyn Museum had transformed The Norm to be a part of a major exhibition. Their first foray into a fully immersive atmosphere — menu and all — was for the Frida Kahlo exhibit, when The Norm became a Mexican restaurant.

The current transformation pays homage to Cardin’s life, with the exhibit offering a retrospective of his career and the restaurant serving as “the crowning jewel.”

Cardin didn’t buy the restaurant until 1981, well after it was famed for being the most expensive restaurant in the world in the 1950s, which is when it gained its true worldwide fame and a place for the rich and famous to mingle. It was in the 1960s that Cardin became a regular — so regular, in fact, that the owners convinced him to eventually buy it, making an offer over that of an investor intent on changing the restaurant.

It was Cardin who truly took the restaurant to new heights by installing an authentic 1900s cabaret, encouraging its use for high-profile events and opening others around the world.

At 97, Cardin is still active in fashion and his restaurant empire.