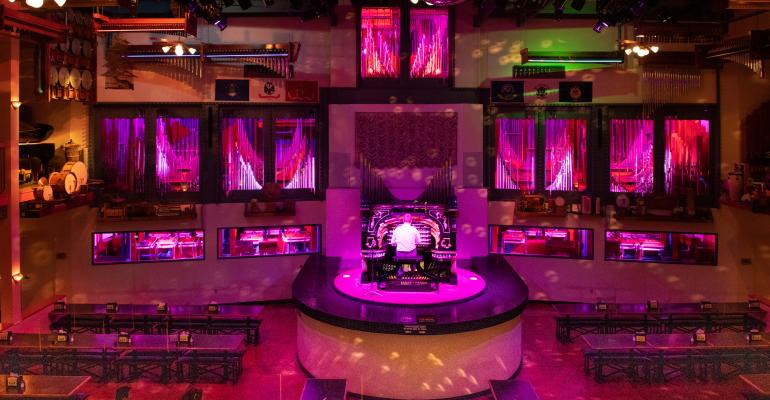 Music and food may go well together, but finding an antique organ commanding the crowd at a pizza joint doesn't happen in most places. But at Organ Stop Pizza in Mesa, Ariz., the restaurant fills its 700 seats each night with people eager to hear live performances of anything from “Uptown Funk” to “Let It Go,” from the movie “Frozen.”

And not just any organ. While pizza, salad and pasta satisfy a range of diners, most are there to see Organ Stop Pizza’s Mighty Wurlitzer, a one-of-a-kind organ with 1,074 individual keys, buttons and switches linked to a series of xylophones, glockenspiels, gongs and cymbals to create the sound of a full-blown orchestra. It's a $8 million instrument that rises 10 feet above the audience on a stage complete with lights, dancing marionette cats and disco balls.

The restaurant resides in an 18,000-square-foot space and draws in people from all over the world, as well as locals going out for a pie and a show, baseball teams needing a bite after a game, and plenty of large groups celebrating birthdays, anniversaries and other milestones.

So, how do owners Jack Barz, Pat Rowan and Brad Bishop manage such a magnificent instrument, as well as feeding hundreds of people each night? We caught up with Barz to find out all about Organ Stop Pizza and its unparalleled concept.

Why do you think so many people flock to Organ Stop Pizza?

Honestly, it's like nothing you can find anywhere else. It's a tourist destination, like many things in Arizona. It's one of those things that, when you come to visit relatives, they are like, 'You have to go to this pizza place.'

One of the best compliments I have ever heard was from a kid in a high school band and the day before they came into Organ Stop, they were at the Grand Canyon. He was like, 'We did a lot of cool things, but this is by far the best thing we have done in Arizona.' I was like, ‘You are putting us a step above the Grand Canyon, we must be doing something right.’

What's the first reaction people have when they visit?

People are overwhelmed. It's hard to explain over the phone or by watching YouTube videos. The sensory overload is amazing. You walk in and smell the food, you see the crowd, you walk into the performing area and you can feel the music going through your body.

The cool thing with that, hearing-impaired people love it because while they can't hear it, they can feel it in their body. I have seen them develop tears because it makes them so happy. It's truly a special place.

With such a mighty organ taking center stage, does the pizza become second fiddle?

I wouldn't say [that], though it definitely takes a backseat for people who are here for the first time. They are so intrigued by everything and it's like, 'Oh we came here to eat, didn't we.'

Our pizza is different from most pizzas out there. It's doughy in the center and soft, but has a very crispy bottom crust. We don't cheap out on toppings at all, and put a lot on top. You know how it is, you don't want a pizza where all you taste is crust and no toppings. … It's our own style of pizza. The sauce goes to the edge, and the cheese goes to the edge, so people don't have a problem eating the crust. We also have sandwiches, pasta, a full salad bar and more.

We heard there used to be a plethora of pizza joints with organs in them a few decades ago?

They weren't all over the place, but back in the '70s, there were around 100 organ-equipped pizza restaurants. It was one of those things that started and then became popular. Those other places didn't have anything nearly as big or as elaborate as ours. The majority hosted much smaller instruments and the size of the restaurant would only be in the 150- to 200-person capacity.

Why do you think other organ-pizza places closed and you survived?

We have always believed in the KISS theory: Keep It Simple Stupid. We stick to counter service. We give customers a number and when it's called they come pick it up and bring to their table.

We keep the menu super simple. A lot of places thought they could make more money doing things like a Friday fish fry or prime rib Sunday. They tried to do a sit-down restaurant, but it's just too loud, you can't hear a server out there.

And that's the other part of it, everything is family-style seating. We have picnic tables throughout the restaurant. You sit next to people you have never sat next to before. You make new friends, and that's how we seat 700. We are very efficient in our seating. If we did table service, it would drop to about 450. On Saturday we have all these big groups that come to party. It's not uncommon to have reservations for big groups of 60 to 70 people.

I imagine not a lot of places seat that many, does that also help draw people in?

That's one reason we are so popular. It's a great place where you can bring a big group of people. It's not uncommon to see a baseball team come in because they know we can accommodate them. Our service is quick and we are very efficient.

This system has worked. We might refine it in ways where we can, but we don't change it too much. I like to follow the Disney model of service, you keep what works. There are little changes here and there, but nothing rocks the boat too much.

Does selling pizza cover the cost of such an operation, or do you also have a cover charge?

We don't have a cover charge, it's all based on food-and-beverage sales. An average check is $12 to $13 per person. It can be done a lot less expensive too. Our kid birthday package is $5.50 a person for pizza and soda. We also do daytime private events with all-you-can-eat pizza buffet, salad and soft drinks for $12 a person. It's not expensive at all, especially since things have increased in price. We try to keep our prices low so the average family can enjoy.

Is it hard to find people to play the Mighty Wurlitzer?

There are not a lot of people that can play an instrument like this. There are very few that can sit down and start playing. We get a lot of church organist or their relatives calling in and asking if they can play. First off, it's worth $8 million, so no.

So who plays it?

We have a total of four people on staff, two on a regular basis. The other two are more of a substitute than anything else. One retired last year after being on the bench for 40 years, and the other one lives in Portland, Ore. We fly her down on a regular basis to play for us when our guys go on vacation.

What kind of music is played?

Everything but rap and hip hop. They don't work on this instrument since it's the same thing over and over and it goes nowhere without the words. We like anything from classical to Disney. "The Phantom of the Opera" is our number one request. We have strobe lights that start playing in here, and it gets dark. That's one of the pieces where you really feel it.

The second most popular is "Let It Go" from “Frozen." People are definitely not letting it go. Another popular one is super fun and dates back to the '40s, the "Chattanooga Choo Choo" [originally played by the Glenn Miller Orchestra in 1941]. It sounds like a freight train is running through the dining room. It's really cool.

As musicians get popular they play them too. One of the organists did an amazing version of "Uptown Funk" when that was popular. They also do Lady Gaga, and Britney Spears when she was popular. They can pretty much do anything.

Yes, but we are old fashioned, requests are done on pencil and paper. Customers can come to the stage and put in the requests. The musicians have stacks of requests, but I can't guess how many they get. It's a lot.