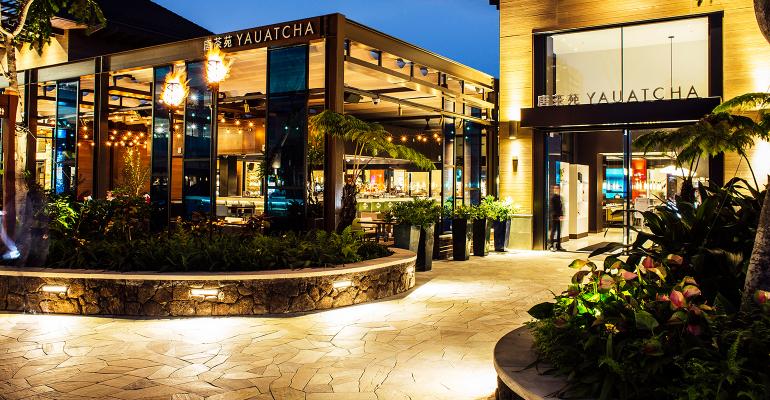 The Chinese dim-sum restaurant Yauatcha in the Honolulu neighborhood of Waikiki.
Operations

Developers are playing up the draw of the mall

A decade ago, shoppers who wanted to grab a quick bite at the mall were limited to a few options.

There was likely a food court with the usual players: Panda Express, Auntie Anne’s Pretzels and perhaps Charleys Philly Steaks or Hot Dog on a Stick. Outside, there might have been The Cheesecake Factory, California Pizza Kitchen, Olive Garden or Yard House.

But today, the world of mall restaurants looks very different. Traditional retailers like Sears, Macy’s and Kmart are closing stores by the hundreds. In their place, developers are bringing in big-name chefs and creative dining experiences, along with massive food halls, breweries, gyms, bowling alleys, grocery stores and arcade complexes designed to get consumers out of the house.

Gone are the days when malls were simply retail centers with food as a supporting player to keep people shopping, said restaurateur Jeremy Fall, who plans to open a full-service restaurant and bar called Easy’s at the Beverly Center mall in Los Angeles, which is undergoing a $500 million renovation.

“Now malls are going through a 180,” Fall said. “They’re flipping the mall to be more of an experiential destination, with food being the main component.”

The renovation at Beverly Center in Los Angeles, which is owned by Taubman Centers Inc., will include 11 chef-driven concepts, including Michael Mina’s Italian seafood restaurant Cal Mare, which opened in November with chef Adam Sobel at the helm.

Mina’s company also will curate a food hall called The Street on the mall’s upper floor, with a collection of vendors. The Street is also in a Taubman mall in Hawaii, along with a location of Mina’s Stripsteak restaurant.

Later this year, the Beverly Center will also house a new concept from chef Joshua Skenes, known for the celebrated Saison in San Francisco, reportedly one of the most expensive restaurants in the country.

Skenes’ Saison Hospitality Group is planning a raw bar and grill called Angler at the Beverly Center in late 2018, which the group described as a seafood-focused concept with more than 100 seats and a maritime design. At the center of the kitchen will be a 32-foot hearth with eight zones for fire cooking, a signature of Saison’s menu.

Maria Mainville, Taubman’s director of strategic communications, said restaurants have become a key differentiator for the company, which operates 23 malls in the U.S.

Taubman doesn’t disclose sales by tenant, but Mainville said: “We are very pleased with the performance of the restaurants in our portfolio. They are proven anchors which can be seen in the fact that we now have more than 100 full-service casual and fine-dining restaurants.”

Out with the old

Similar transformations are playing out at malls across the country.

“You read almost every day that retail is dying, or the mall is dying, citing Sears closing or Radio Shack. Well, good, no one really needs that anymore,” said Adam Schwegman, vice president of eat and drink at GGP, the nation’s second-largest mall operator, with 127 properties in 40 states. “We see it as an opportunity to turn malls inside out and do more place-making, and food is a big part of that.”

GGP has grown annual sales from food from 6 percent in 2012 to 13 percent in 2017, now accounting for about $2 billion. GGP’s portfolio includes about 500 full-service restaurants, and sales in that category have grown around 22 percent over the past five years. Limited-service restaurant sales have grown 26 percent, with food halls becoming a GGP specialty. The company will soon bring a brewery to a mall not yet disclosed, Schwegman said.

An example of GGP’s food emphasis is Tysons Galleria in McLean, Va., where local restaurateur Mike Isabella recently opened a 40,000-square-foot food hall as an anchor.

Isabella Eatery includes five outlets of existing restaurants by Mike Isabella Concepts, from a tapas joint to a ramen spot, as well four other new concepts and a Prohibition-era cocktail bar.

GGP worked with alcohol officials there to allow customers to walk with their drink through the food hall area, designated by flooring. Schwegman said that will be seen more in malls where allowed by law. Outside Houston, GGP’s Baybrook Mall collects a mix of local brands and national chains, which Schwegman said was the right mix for that community.

“You have the nationals that you know will do a certain volume. They’re going to execute in terms of getting open on time, and they’ve got more national type of credit,” he said. “But locals are the differentiator.”

Restaurant operators say any stigma that may have been associated with opening in a mall is long gone.

The Las Vegas-based Hakkasan Group has had great success with its Chinese dim-sum concept Yauatcha at malls in Houston and Waikiki, with lines out the door, said Gert Kopera, the group’s executive vice president.

The group, which operates about 41 restaurants worldwide and 20 in the U.S., also has locations of its Herringbone concept at a Taubman property in Waikiki.

“The reputation of malls has really changed,” Kopera said. “It’s important for the developer to get restaurants that fit. You couldn’t have a Hakkasan in a mall,” he said, referring to the group’s ultra-high-end namesake concept. “But Yauatcha gives a sophistication that attracts a certain customer.

“In my book, malls have become more social hubs,” he added.

Malls also tend to have the benefit of parking and protection from bad weather, Kopera noted. “We’ll definitely look at malls more and more.”

“I’m surprised how many times I see a president of a company spend an hour in the market and then make a decision,” Singh said.

Restaurant operators should also carefully consider how many food venues a mall can support. Singh said he once looked at a mall that planned to put restaurants in all 12 outparcels around the property.

“You just knew in that market nobody was going to do well,” he said. “The market wasn’t big enough for that many restaurants.”

One key is negotiating an exclusivity clause before signing a lease in a mall.

“Exclusivity is key. The more they want you, the more they’ll give you,” said Jason Berry, founder and principal of Knead Hospitality + Design, which operates the Succotash concepts at Washington, D.C.’s National Harbor, a mixed-use retail center with hotels, a movie theater and tourist activities.

In February, Knead will open its Mexican Mi Vida concept at The District Wharf on the Potomac River in D.C., another massive mixed-use redevelopment featuring a long list of restaurants, including Shake Shack and the dessert shop Milk Bar.

Projects like The Wharf will be the “new mall,” Berry said, with apartments, hotels, office space, retail and plenty of parking.

But massive redevelopments often come in phases, and Berry noted that his exclusivity deal only applies to the first phase of development.

“There’s more coming down the road that we don’t know about,” he said.