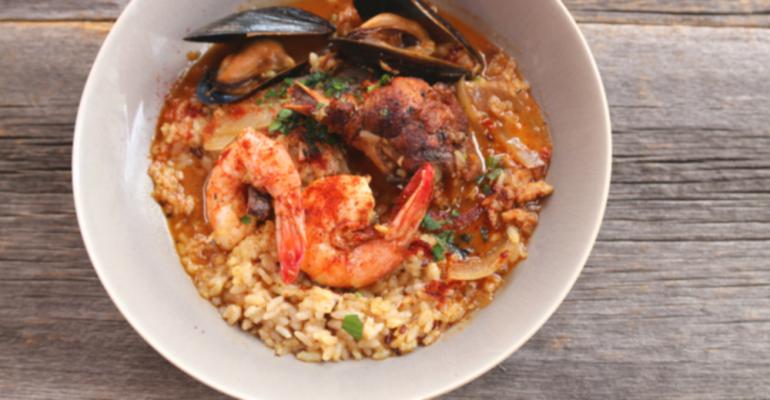 Los Angeles chef and restaurateur Mark Peel is moving forward with his plan to multiply the fast-casual seafood concept Prawn.

The concept began in 2015 as Bombo Foods, an outlet in downtown Los Angeles’ Grand Central Market. In May, however, he rebranded it as Prawn, with a similar menu built around house-made broths and cooking in steam kettles.

The concept as Prawn has been a hit, Peel said, and he is planning a second location, scheduled to open in Pasadena in early November.

Peel is known for his former fine-dining restaurant Campanile in Los Angeles, which closed in 2012 after two decades. Before that, he worked in some of California’s top kitchens, including Spago, Ma Maison, Michael’s and Chez Panisse.

And though his background is almost exclusively full service, Peel now sees limited service as an opportunity to make good food more accessible to more people.

“It’s actually something I have been interested in for a long time, back to the early ‘80s, and when I was at UC Davis,” he said. “I was interested in ‘how do we feed 7 billion people every day?’”

The model of restaurants like Campanile, Spago or Chez Panisse “doesn’t really work for the vast majority of people,” he said. “I was interested in doing something accessible for the 70 percent [of the population], not the 5 percent.”

The new Prawn’s menu will include a Scottish salmon bowl (left) and Seattle fish stew.

Peel said the simplicity of Prawn’s model allows him to “deliver a full meal for under $15 and still pay the bills.”

The first Prawn operates in less than 500-square feet as a stall in a food hall of sorts.

But the new location in Pasadena will be “full-ish” service, with tables, plateware and glasses for those who dine in. Guests will order and pick up at the counter, though Peel is considering the use of food runners.

The food, however, is very much like what might be found on a fine-dining menu: a warm albacore salad includes local tuna stewed in curried shrimp broth with shiitake mushrooms and roasted onions on Napa cabbage and mustard greens with preserved lemon and date vinaigrette ($12). The paella features shrimp, mussels, house-made pork sausage and a spicy chicken drumstick in saffron broth ($14). And wild Mexican shrimp is simmered in lobster broth with potatoes, corn, bacon and pickled onion over rice ($13).

The plan is to use a commissary to make the various broths — from the lobster broth that serves as a base for the Seattle fish stew ($14) to the creamy clam broth that is swirled with kabocha squash for the chowder ($8.50).

The broths and other prepped ingredients will be delivered fresh daily to the restaurants, where final cooking will be done for dishes like the Scottish salmon bowl, in which salmon is steamed over shiitake and seaweed broth and tossed with Napa cabbage and pickled onions, and served over brown rice and barley ($11). The hub-and-spoke model of using a commissary will allow Peel (left) to do more Prawn locations in Los Angeles, with plans for “eventual world domination,” he said. One commissary could serve up to 10 units, but Peel said he hasn’t decided whether franchising may be in the brand’s future.

“I used to pooh pooh chains as soulless. But why is it bad if you can do it again?” he said. “This model works with multiple locations. Each individual location can use a smaller footprint, there’s less mess, there are cleaner sight lines, it’s faster, more efficient and focused.”

After the rebranding, Peel said sales at the restaurant as Prawn increased 60 percent to 75 percent. While the name Bombo was fun, it didn’t convey to guests what the concept was, he said.

With fast casual, you need to be able to stand 50 feet away and look at it and go, “Got it. I understand.” Peel said the name Prawn is much stronger because it says, "We're seafood."

The menu will expand slightly at the second unit, since the Pasadena location is about 1,300-square feet, said Peel. The menu will include dishes like a whole steamed lobster as a regular special, served cracked and split with the broth, roe and spicy rouille.

The new location will also have an oyster bar. Beer and wine will be on tap.

Peel said the average check is about $15, but he doesn’t categorize the brand as high-end fast casual.

“I don’t want people to think it’s too fancy or weird,” he said. “It’s accessible, good food. I know you can make really delicious, healthy food for a good price point.”