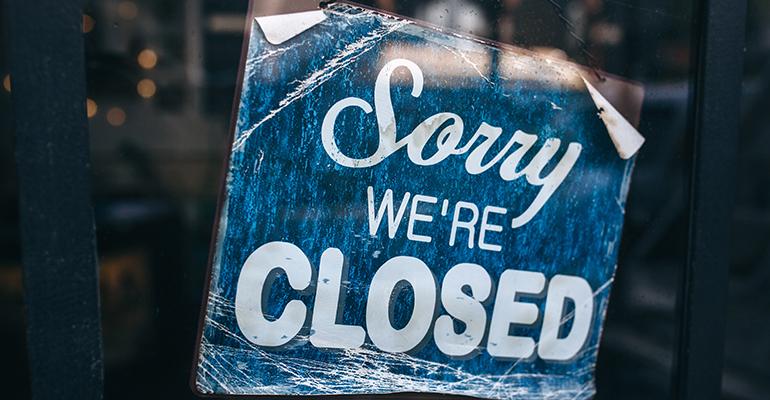 Governors of New York, Illinois, California and Ohio call for shut down of restaurants and bars to prevent spread of coronavirus

The governors of Illinois, Ohio and California on Sunday ordered restaurants and bars to shut down or restrict capacity to stem the spread of coronavirus. New York's Gov. Andrew Cuomo reportedly urged restaurants to voluntarily close their dining rooms, while New York City's Mayor Bill de Blasio said he would issue an order on Monday for the city's eating and drinking spots to shift to delivery and takeout only, starting Tuesday.

The moves comes as the Centers for Disease Control and Prevention on Sunday recommended that gatherings of 50 or more people be prohibited for the next eight weeks. Late Sunday night, Vice President Mike Pence said new guidelines would be released Monday morning regarding curfews or closures of certain locations, including restaurants.

Related: Grubhub to suspend some fees for independent restaurants in light of coronavirus pandemic

Illinois Gov. J.B. Pritzker ordered the closure of all restaurants and bars across the state, starting Monday through March 30. Restaurants will be allowed to offer food delivery, drive thru service or curbside pickup.

“This is another hard step to take,” Pritzker said in a statement. “I know how difficult this will be on small businesses around the state. But we must do everything we can to safeguard the health of the citizens of Illinois, and that requires this urgent action.”

In California, Gov. Gavin Newsom reportedly announced sweeping measures, including the temporary closure of bars, wine bars, breweries and pubs — two days before St. Patrick’s Day. Restaurants must reduce capacity by half, and the governor encouraged them instead to use delivery and curbside pickup.

Newsom also asked state residents over age 65 — who are at higher risk from COVID-19 — to stay home.

Ohio Gov. Mike DeWine also issued an order that restaurants and bars close their dining rooms, beginning Sunday. “Establishments can stay open for carry out and delivery,” he Tweeted. “What we can’t have is people congregating and seated.”

Elsewhere across the U.S., a growing number of lawmakers and officials called for similar shutdowns, even as hundreds of restaurant operators proactively announced temporary closures, including the multiconcept operators José Andrés, Tom Colicchio and David Chang.

Cuomo and de Blasio ordered restaurants and bars to cut capacity by half last week. But after a relatively busy Saturday night, New York City council members and officials called for a complete lock down as COVID-19 cases continued to climb.

De Blasio on Sunday tweeted that he would sign an executive order on Monday limiting restaurants, cafes and bars to delivery and takeout only.

Andrew Rigie, executive director of the New York City Hospitality Alliance, called on third-party delivery players to waive or cap their fees. "If New York City's restaurants will be forced to deliver-only and risk their very existance to stem the spread of this pandemic, then third-party delivery platforms must reciprocate and immediately waive or cap fees at 10%, or many of these restaurants will close for good before the week is through."

In Boston, Mayor Marty Walsh on Sunday ordered restaurants, bar rooms and nightclubs to reduce capacity by 50%, remove tables and chairs to reflect that reduced capacity, and follow guidelines about social distancing and not allowing lines outside.

Washington, D.C. Mayor Muriel Bowser reportedly announced new rules on Sunday requiring restaurants and bars to ensure no more than 250 people are present in a space at the same time; suspend the use of bar seating; prohibit service to standing patrons; limiting table seating to six or less and making sure tables are separated by at least six feet.

Other cities went for full shutdowns, including Hoboken, N.J., where Mayor Ravinder Bhalla ordered all restaurants to close down dining rooms, but said food could be offered for takeout and delivery. He also imposed a curfew, starting Monday, asking residents to stay in their homes between 10 p.m. and 5 a.m., unless work related.

Over the weekend, restaurant operators across the country announced the voluntary closure of all their restaurants, joining New York’s Union Square Hospitality Group and Seattle’s Tom Douglas, who made similar announcements last week.

Andrés, for example, said Sunday his ThinkFoodGroup would immediately close all restaurants in Washington, D.C. and New York City. Most would be “repurposed” on Tuesday as community kitchens, with affordable plates of the day available for takeout.

“As you know, we are in a serious global emergency and every one of us needs to take every precaution, including staying home as much as possible,” Andrés said in a Tweeted message. “However, we as a restaurant company also want to help provide food for those who want it in a safe manner. We feel these community kitchens can help during this challenging time, and those who cannot afford to pay we will welcome as well.”

The kitchens will operate out of the restaurants’ side doors with a limited number of volunteers from noon to 5 p.m. daily, offering takeout only. Among the restaurants making the shift are America Eats Tavern; Jaleo; Oyamel and Zaytinya in the Washington area. The high-end venues Minibar and Barmini, as well as China Chilcano, will close and not serve as community kitchens. The fast-casual Beefsteak locations in the D.C. area will offer delivery only.

In New York, Mercado Little Spain in Hudson Yards will close, but the Little Spain’s Spanish Diner outlet within it will operate as a community kitchen.

Andrés also said all restaurant employees will be provided with paid leave and current health benefits for at least the first two weeks.

In a message posted on its website, the company said they are closely monitoring the situation for its restaurants in Las Vegas, Sydney and Toronto.

"This is unquestionably the most difficult moment in Momofuku’s history,” the message said. “The severity of the COVID-19 crisis has put our business and community in completely uncharted territory. Our company is built on the belief that there is great power in bringing people together over food, but in this extraordinary time, we must prioritize the safety of our guests and staff. We are determined to get back to doing what we love as soon as it is safe to do so.”

Colicchio's New York-based Crafted Hospitality also announced Sunday that restaurants in New York and Los Angeles, including Craft, Riverpark and Temple Court, would close after dinner service and temporarily lay off employees. Colicchio said 50% of all gift cards purchased by April 30 would go into a staff fund to help financially support workers.

Some in the industry have been calling for restaurants and bars to be closed nationwide, following news that France and Spain have also taking the unprecedented step.

Dr. Anthony Fauci, director of the National Institute of Allergy and Infectious Disease and a key member of the Trump administration coronavirus task force, on Sunday implied that closing restaurants and bars would be a good idea, though on “Face the Nation” he described that step as “overkill.”

Still, he said “everything is on the table,” adding that he personally wouldn’t go to a restaurant because he has an important job and can’t afford to be self-isolating for 14 days. On CNN the same day, however, he indicated more support for a national lockdown of restaurants and bars.