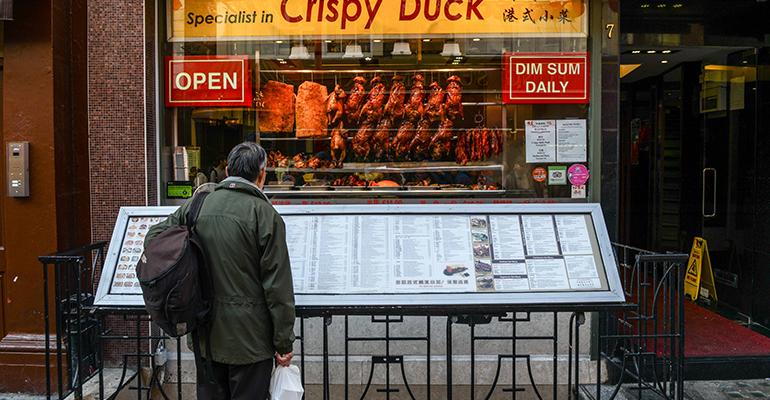 <p>A new study found that the presence of calorie counts on menus hasn&#39;t had much impact on eating habits.</p>
Operations

Get ready for menu labeling, plan B

Watch out. Mission creep—the tendency of a project to become unintentionally wider in scope than its initial objective–has come to the menu labeling effort. The new thinking: instead of getting consumers to make smart nutritional choices when ordering at restaurants—a study indicates that’s not going to happen—proponents want operators to make those choices for their customers instead.

How? By reducing the amount of calories contained in the meals restaurants serve.

“If other chain restaurants follow this same trend, once mandatory menu labeling goes into effect, it could significantly improve the restaurant environment for consumers. This could get consumers to eat healthier without having to change their behavior, something that is a very difficult thing to do and sustain.”

Oh, it’s difficult all right. Another new study finds that consumer eating behavior is largely unaffected by the presence of calorie counts on menus.

This study, “Five Years Later: Awareness Of New York City’s Calorie Labels Declined, With No Changes In Calories Purchased,” appears in the November issue of Health Affairs.  It comes from New York University’s Langone Medical Center and is touted as “the first long-term analysis of the effects of menu labeling in the United States.”

NYU researchers tracked the arc of fast food patrons’ dining habits over a six-year period and found that the net effect of menu labeling on obesity approaches zero.

“Our study suggests that menu labeling, in particular at fast-food restaurants, will not on its own lead to any lasting reductions in calories consumed,” says study senior investigator Brian Elbel.

Results show that fewer than half of restaurant customers pay much attention to nutrition labeling in restaurants, with that number diminishing over time. The percentage of diners who claimed the information influenced their choice of a lower-calorie item fell from an initial high of just 12 percent into the mid-single digits. Just 37 percent of diners even noticed calorie counts posted on menu in the study’s most recent survey period. Worse, even those who claimed to be influenced to order lower-calorie items did not reduce their caloric intake overall.

The authors’ conclusion: “Menu labeling at fast-food chain restaurants, which the Affordable Care Act requires to be implemented nationwide in 2016, remains an unproven strategy for improving the nutritional quality of consumer food choices at the population level. Additional policy efforts that go beyond labeling and possibly alter labeling to increase its impact must be considered.”

Wondering what of “additional policy efforts that go beyond labeling” might involve?   Wolfson has an idea about where policymakers might start. Instead of relying on customers to pay attention to a meal’s caloric counts, have restaurants do it for them.

A study she co-authored also appears in the November issue of Health Affairs. Its title: “Restaurants With Calories Displayed On Menus Had Lower Calorie Counts Compared To Restaurants Without Such Labels.”

Here’s what the article suggests.

She adds this note: “Calorie labeling may have important effects on the food served in restaurants by compelling the introduction of lower-calorie items.”

The issue from the operator perspective: Who would be doing the compelling in this scenario? It’s fine if restaurants would be free to decide whether they want to offer more lower-calorie items. Perhaps some might choose to build an entire concept around the idea, as Darden has done with Seasons 52. But if policymakers start coming up with new rules about the caloric content of certain menu items...that’s where mission creep would come in.

Right now, enforcement of the U.S. Food and Drug Administration’s menu labeling rule is on hold until Dec. 1, 2016. And the rule only affects chains with 20 or more units.

But these studies suggest the rule won’t do much to aid anti-obesity efforts and that alternative approaches could be sought. If they are, let’s hope more regulations that mandate how restaurants operate aren’t seen as part of the solution.