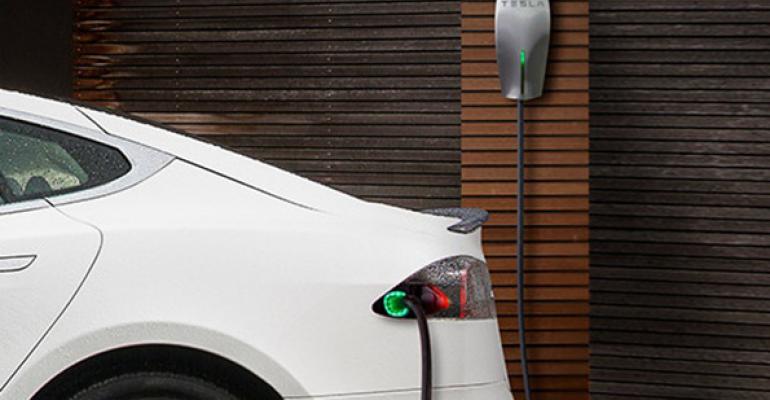 Interested in attracting a stream of wealthy consumers to your restaurant while both you and they help save the planet? How about if the devices that enable you to do so won‘t cost you a dime? That’s electric vehicle maker Tesla’s pitch to restaurants willing to become part of its destination charging network, a system designed to reduce “range anxiety” for its car owners when they travel long distances from home.

“Attract Tesla drivers to your property by joining the destination charging network,” the Palo Alto, CA-based company says. Qualified properties will receive their first two Tesla wall connectors free of charge as long they are installed in visible or convenient locations.

And what drivers you’ll attract. Although the company has sold just 90,000 cars to date,  their owners are a deep-pocketed group. The average household income of Tesla owners is $292,200, according to a Strategic Vision New Vehicle Experience Study.

It’s a tech-savvy group whose members want to go green, even though the vehicle they’re going green in accelerates from zero to 60 in 2.8 seconds should owners opt for what Tesla c.e.o. Elon Musk dub the “ludicrous mode” upgrade on their Model S.

Tesla’s electric vehicles can go fast, but they can’t go far. Overnight charging, whether done at home or on the road, gives owners roughly 250 miles of travel. Travel further than that and they have to recharge their vehicle to keep going.

One option is to locate one of Tesla’s 585 company-owned “Supercharger” stations (which collectively host 3,397 Superchargers) and plug in there. The other is to make use of a second network—i.e., the destination charging network—made up of about 1,100 businesses like restaurants. The list is top-heavy with hotel charging stations, not restaurants.)

Charging a Tesla in either network, while much faster than it used to be, is still slow. Tesla hopes to one day speed up the process by swapping out the car’s battery packs for fresh ones. That method would take just three minutes, but wouldn’t be free like the charging stations are. In the meantime, Tesla drivers who need to top off their batteries must exercise a lot of patience. Long-distance travelers have learned to program in a couple of hours of charging time as part of their day.

That’s why Tesla might need restaurants more than restaurants need Tesla. The company’s goal is to strategically place chargers so car owners can minimize stops during long distance travel and have an appealing way to kill time while their vehicles recharge. Drivers are typically looking at about a one-hour wait—just the right amount of time for a meal.

The company makes this downtime seem like a fun opportunity. “Tesla partners with hotels, restaurants, shopping centers and resorts to make charging when you arrive at your destination as simple as charging at home. Pull up and plug into a Tesla wall connector to charge Model S while you shop, dine or even during an overnight stay.”

If you want a way to attract a captive audience to your restaurant, this is one way to do it. There are other advantages, too.

“Tesla is selling essentially the image benefits associated with its brand; partners get the mystique and influence of being a Tesla location, attracting its drivers to their on-site businesses, yes, but also offering up press and social media profile bumps. Plus, for companies with environmental sustainability programs and priorities, the brand association benefits are obviously attractive, too.”

The number of Tesla vehicles on the road is expected to grow rapidly when the company introduces its popularly priced Model 3 sedan next year. List price is expected to be $35,000, roughly half the price of the model S.

Tesla is a fast-moving company, so be sure to check directly with the company if you’re interested. Its original partner deal featured free chargers, free installation and a separate electric meter so Tesla would be billed directly for the power its drivers used. That may still be available in some instances, but don’t count on it now. If you’re game, Tesla has provided the exact details of joining its destination charging program.

If nothing else, participation might give your restaurant a feel for whether providing electric charging makes business sense. More automakers are getting into the electric vehicle game—Chevrolet Volt and Nissan Leaf right now, others (perhaps including Apple and Google coming next. If internal combustion engines start to become a legacy technology, on-site charging could become a key perk for restaurant-goers in the years ahead. Restaurants ranging from Napa Valley’s three-Michelin-star The Restaurant at Meadowood to Helena, MT’s Suds Hut Famous Chicken are part of the Tesla network already. Could your place be next?