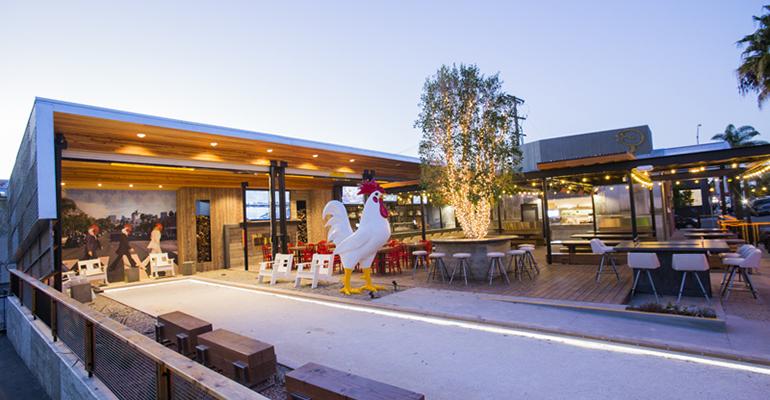 The Crack Shack is a new fast-casual concept in San Diego. Combining the restaurant's simple, but chef-driven chicken-and-egg menu, craft beers and bocce ball courts with high-tech automation and video and audio entertainment cranks up the fun at this new hot spot.

A restaurant with no walls poses unique challenges—security chief among them. Michael Rosen and Richard Blais, the owners/operators of the acclaimed, upscale Juniper & Ivy in San Diego, launched a fast-casual, open-air chicken restaurant recently and invested heavily in technology both to secure the property and provide the newest employee tools and features in guest entertainment.

Security at the forefront

Crack Shack contracted with El Cajon, CA-based Paradise InfoTech to address its technology concerns. Given the restaurant's open-air environment, security was crucial. The solution was a security control panel connected to a set of surveillance cameras and a network video recorder. The setup allows the owners and other key personnel to log in to an app to see what's going on from anywhere at any time. Besides security, the owners also use the technology to check out the crowd on a given evening or see how the operation is running.

At night, managers set the security system, which includes a series motion detectors. If motion is detected, a notification is sent from the security control panel to the monitoring company as well as to the Crack Shack team. A series of events then follows within the ELAN brand security and entertainment control system: First security lights are turned, via the systems lighting controls. Next, audio functions are triggered and an announcement is played through the property's speakers warning intruders that security has been dispatched. Finally, the system sends an electronic notification to the security company, which in turn accesses the video feeds to see if someone is actually on the premises. If needed, the security company dispatches personnel to the property.

Crack Shack was set up with two outdoor audio zones: One in the trellised eating area, and one surrounding the restaurant's bocce ball courts. The zones are connected through a Niles brand multiroom audio controller. Outdoor, weather-proof landscape speakers and subwoofers help ensure a pleasing, full sound experience.

Inside the kitchen, staff members have access to their own audio zone through the ELAN app, which they control on an iPad. Because Rosen and Blais wanted to keep spirits high with music in the back of the house, they chose SpeakerCraft in-ceiling speakers, designed to provide crystal-clear audio. The contractor also installed a microphone in the kitchen, so the Crack Shack team members can entertain guests with occasional chicken-themed jokes throughout the day. The system is set up through a mixer to play it over the Niles controller. When the microphone is in use, it plays over the same speakers that are used for the music, so no one misses a punch line.

The bar area features a large video wall as well as two individual screens. Integrating the video wall into the control system required Paradise to create custom interfaces within the ELAN platform so that all of the screens could be operated through the control system. Additionally, bar backs and other staff have the ability to change the TV channels through the ELAN app on the restaurant's iPads. Accompanying audio is delivered through in-ceiling speakers in the bar and restroom area.