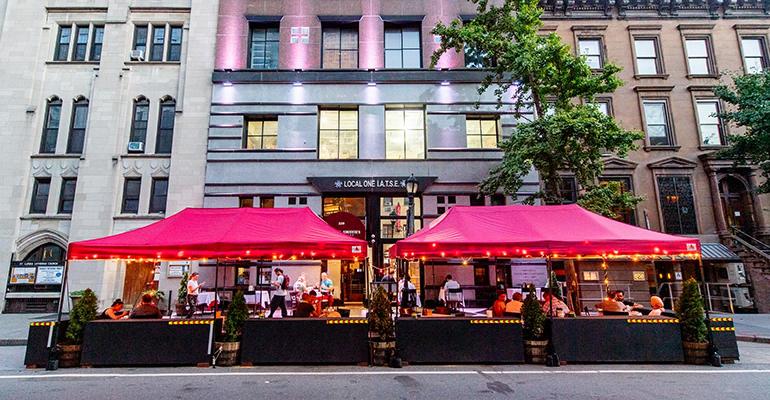 The COVID-19 pandemic has devastated New York City’s restaurant industry and its employment, according to a new report from the New York state comptroller’s office.

By August 2020, employment in the city’s restaurant industry was still only 55% of its level in February, before the coronavirus pandemic was declared and dining restrictions were ordered, noted the report, which was released Thursday.

Related: New York City indoor dining reopening restrictions leave some restaurants wondering, is it worth it?

“While there are indications that revenues for open restaurants improved since their low point in March 2020, many establishments are still struggling and others remain closed,” the report noted.

“New York City’s bars and restaurants are the lifeblood of our neighborhoods,” said state Comptroller Thomas DiNapoli, in a statement. “The industry is challenging under the best of circumstances and many eateries operate on tight margins. Now they face an unprecedented upheaval that may cause many establishments to close forever.”

The comptroller’s reported that New York City had 23,650 establishments in 2019, provided 317,800 jobs, paid $10.7 billion in total wages citywide and delivered nearly $27 billion in taxable sales. But the pandemic has reduced operations and left tens of thousands unemployed, DiNapoli’s report noted.

In April, restaurant employment in New York City dropped to 91,000 jobs as restrictions were imposed on businesses. Taxable sales for the city’s restaurant industry also fell by 71% during March, April and May compared to a year earlier, the report noted.

Rigie, in a statement, said the comptroller’s report sent “a critical message that must be heard by policy makers and New Yorkers at large, which is: That in order to save our city’s greater economy, our restaurant industry must be at the core of its recovery.”

More policies must be enacted at all levels of government to save the small businesses, Rigie said.

DiNapoli, in his report, also noted that the restaurant industry employed a wide number of immigrants.

More than 60% of city resident restaurant workers were immigrants in 2018, compared to 45% across all occupations, he noted.

State Assemblywoman Catalina Cruz, a Democrat who represents the borough of Queens, said, “When COVID-19 emerged, our community was the first to be impacted and it continues to struggle to rebound from the financial impact of the shutdown. The state must do everything in its power to ensure our small businesses survive beyond the pandemic.”

Queens has 6,000 restaurants, said Thomas Grech, president and CEO of the Queens Chamber of Commerce, and they “not only contribute to the unique character of our neighborhoods, they are the backbone of our local economy, creating jobs and entrepreneurship opportunities for New Yorkers from all walks of life, in every corner of our borough. The pandemic has devastated this industry, with thousands losing their jobs and many owners unable to pay rent.

The report, “The Restaurant Industry in New York City: Tracking the Recovery,” is available at the comptroller’s website.

DiNapoli and others urged further government support of the restaurant industry.

Melissa Autilio Fleischut, president and CEO of the New York State Restaurant Association, said, “Many in the industry are on life support and barring government assistance, a majority of restaurants may face closure by year’s end. This is a critical time for the culinary capital of the world and hopefully initiatives like expanded outdoor dining and the reopening of indoor dining can turn around the fortunes of our operators, both big and small.”

In June, the city started the Open Restaurant program, which issued special sidewalk and roadway permits to restaurants. The city expanded the program to allow restaurants to set up tables in traffic-free streets, and the mayor recently extended the program year-round.

DiNapoli’s report found that this program and the phased reopening of the economy led to restaurant employment rising to 174,000 jobs in August.

As of the first week of September, a total of 43% of restaurants and bars citywide had received sidewalk or roadway seating permits. That included 50% of establishments in Manhattan, and more than 40% each in Brooklyn and Queens.

Restaurants in the city opened for indoor dining on Sept. 30 with limits of 25% of capacity.