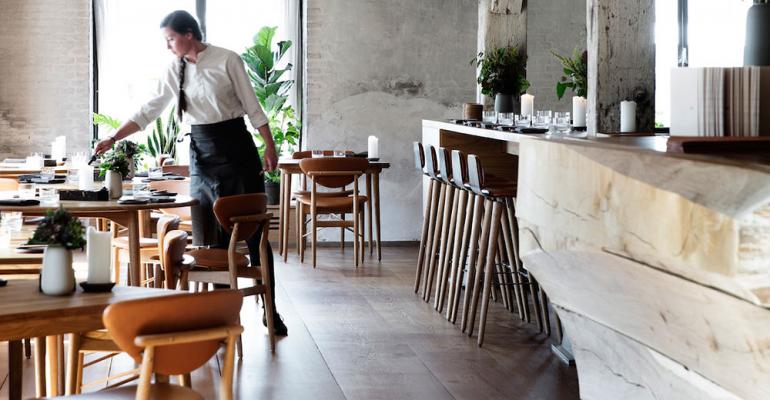 The world said goodbye to René Redzepi’s Noma temporarily earlier this year as it moves and goes through a reinvention.

Noma in Copenhagen. Open July 5, the word Barr means “barley” in old Norse or “crops” in Ireland. Barley is a key ingredient in beer and a local staple.

For this concept, Redzepi joined forces with chef and restaurateur Thorsten Schmidt to focus on the food and drink traditions along the North Sea, an area that spans Scandinavia, Germany, Benelux and the British Isles.

That means classic dishes like frikadeller, or Danish meatballs, schnitzel and hot-smoked salmon, along with a large selection of craft beers and aquavits. The menu is a la carte and will change seasonally.

The interior design by Snøhetta creates elegance from roughly hewn and polished wood, the building’s original stone walls, leather and brass touches. A relief pattern on the ceiling and wall panels are inspired by a microscopic view of barley.

Much of the material used for the custom furniture and cabinetry was sourced locally from trees grown less than 50 kilometers from the restaurant, Snøhetta officials said. The restaurant seats 60, with another 30 at the bar.

For Barr, the design firm — which is also known for The French Laundry’s recent kitchen expansion, the James Beard Public Market project coming to Portland, Ore., and the National September 11 Memorial Museum & Pavilion at the World Trade Center site —even developed a unique typeface called Barr Gräbenbach for signage and the menu.

The 2.0 version of Noma, meanwhile, is on track to open in December, according to the restaurant’s blog. Meanwhile, an outdoor, family-style, open-fire pop-up version called Under the Bridge is opening under a bridge this summer in Copenhagen.