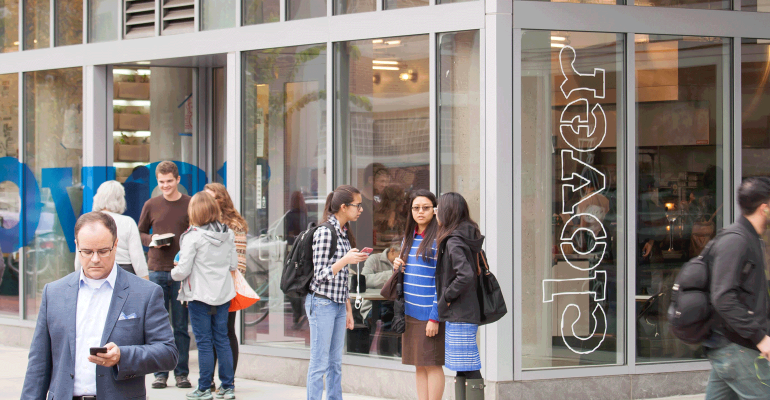 At Clover Food Lab in Boston, what one executive called a “magic” digital menu board tells customers which seasonal items are on the menu each day, and which may have sold out.

It’s one thing for an independent restaurant to change its menu daily, but it’s quite a feat for a fast-casual chain with 13 units and national growth aspirations.

Most chains with an eye toward seasonality train customers to expect consistent menu items across locations. But Clover lets mother nature decide what’s on the menu each day. For instance, if a local farmer doesn’t have tomatoes, but has great bell peppers, Clover will create a menu item with peppers.

For the Cambridge, Mass.-based vegetarian chain, founded in 2008 as a food truck, the key to success is realigning customer expectations.

“If you’re really buying what’s in season and what’s at its peak, then what you’re serving changes a lot,” said founder and CEO Ayr Muir. “The larger challenge is finding a way to make that really attractive and exciting to customers.” Starting Feb. 14, that magic will extend to a new Clover app, which will also give users live access to what’s on the menu at their local restaurant. Customers will also be able to order ahead and pay.

No existing app developer was able to meet the dynamic needs of Clover’s menu, so Muir’s team built it internally and beta-tested it for a year. The app currently has about 6,000 users who make up around 9 percent of the chain’s daily sales, Muir said.

Keeping customers engaged is key for the healthful and environmentally-conscious chain, which eschews meat and frozen foods, and makes everything from scratch — except ketchup and mayonnaise.

The menu is short and simple, perhaps five sandwiches and five sides on any given day. To prevent food waste, Clover is designed to let food run out, rather than be oversupplied.

With the app, Clover will also be able to keep customers informed about when their favorite item is available, like the Brussels sprout sandwich, which Muir called a “blockbuster.” It includes fried Massachusetts Brussels sprouts tossed with za’atar, smoked cheddar, pickled red cabbage, toasted hazelnuts and a sour-cream Dijon spread. Customers ask for the sandwich year-round and beg Clover to bring it back more often.

“But they miss it so much because we’ve been so disciplined about only serving it when Brussels sprouts taste great,” Muir said. “If we served it year-round, they probably wouldn’t be as excited about it.”

Clover works closely with local farmers. For instance, the chain will give a supplier of root vegetables predictions of sales volumes for a certain season, and the farmer will use that information to determine seed purchase and acreage allocation.

“We just bought a ton of squash from a really beautiful organic farm outside of Boston. They didn’t have a source and had already given out as much as they could to [Community Supported Agriculture programs]. We got it for a good price, and now we’ll have squash all over the menu until we run through it,” Muir said. Clover’s restaurants average about $1.7 million in sales in 1,300-1,800 square feet, with a blended average check of $10 to $11, including beverages, according to Muir. Two Clover locations are in Whole Foods Market stores.

The chain almost took its first step outside Boston, to Washington, D.C., in 2017, but Muir decided to hold off.

“I think we’re dealing with a little bubble on rents right now,” he said. “I was afraid we were locking into long-term rates at peak market.” For now, Clover will continue to grow in Boston, where Muir sees plenty of room for more units once high rents in the city ease and the deals are right.

“It’s important to be patient,” he said. “There are so many examples of restaurants that have wonderful ideas that resonate with customers, but somehow they grow too fast.”

Still, Clover is designed as a brand with national potential. The chain has powerful supporters, like former Panera Bread CEO Ron Shaich, whom Muir described as a friend and mentor. Shaich confirmed he is also an investor.

‘As open as possible’

Farmers, employees and even customers are invited to the chain’s open food-development meetings every week. Menu ideas are pitched and vendor products, from beer to safflower oil, are tasted.

Muir takes feedback seriously. The chain’s best-selling chickpea fritter sandwich is on its 32nd iteration, and he said Clover has a deep bench of some 800 recipes ready to scale. “If you look at it over the course of a year, we have a huge menu, like The Cheesecake Factory,” Muir said. “We just don’t serve it all at one time.”

Clover is also transparent about its speed of service, which Muir said compares with McDonald’s. The “magic” menu boards tell customers how long it took for each item to be served when it was last ordered.

“You can walk in and see the last person’s sandwich took one minute, and often it is that fast,” said Lucia Jazayeri, Clover’s creative director. “We don’t have a lot of the company that’s hidden, so we wanted to keep that as open as possible. Customers can make decisions based on how quick it can be.”