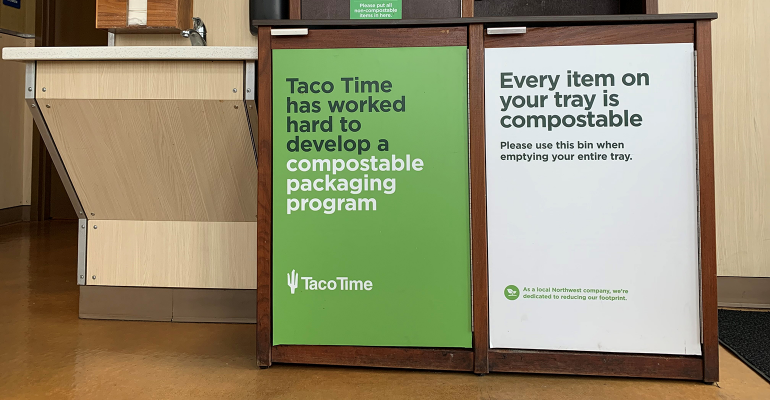 Brand has become a poster child for good waste management

When Seattle passed an ordinance in 2010 requiring restaurant foodservice disposables for dine-in guests to be recyclable or compostable, the fast-casual regional chain jumped right on it.

The now-80-unit chain was founded in 1962 and is still run by the same family. Outside Western Washington, Taco Time is franchised by Phoenix-based Kahala Corp., but the Tonkin family and its franchisees run the units as a separate company in this region.

“We’re run by a local family; our customers are our neighbors. We felt like the Seattle ordinance was a reason to really dial in the packaging and make it as environmentally friendly as possible,” said Wes Benson, Taco Time’s franchise affairs and sustainability manager. 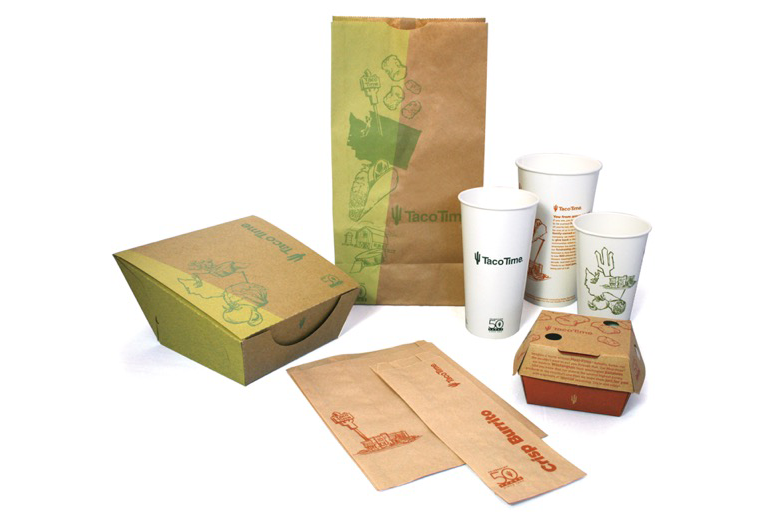 “It really only took one person in a hurry to mess up a whole bag of compost or recycling” by putting the wrong thing in the wrong bin, Benson said.

If a bit of plastic ended up in the compost, for example, it could contaminate the material that would later be sold to farmers. “Composters depend on getting clean feedstock,” said Benson. “Every time a farmer finds some plastic tines from a non-compostable fork, they’re less likely to buy that compost next time.”

But the problem seemed to be with the sorting phase. So Taco Time decided to double down and buy only compostable disposables.

“We decided to try it for a month. We put a single bin in and went 100-percent compostable in the dining room. And overnight, it worked,” said Benson. “There was no contamination, so we got a full bin of compost. There was no training of guests or employees because there was no sorting.”

And there was a “massive positive flood of goodwill from guests,” said Benson.

Taco Time expanded the program first to all city restaurants, then throughout the system, even to units outside Seattle where there was no legislative mandate. It wasn’t an easy conversation with franchise operators of 25 units, Benson noted, but they did it.

Over the first five years of the program, Taco Time recorded high single-digit sales growth every year, and Benson credits the composting commitment, as well as the chain’s focus on local suppliers. 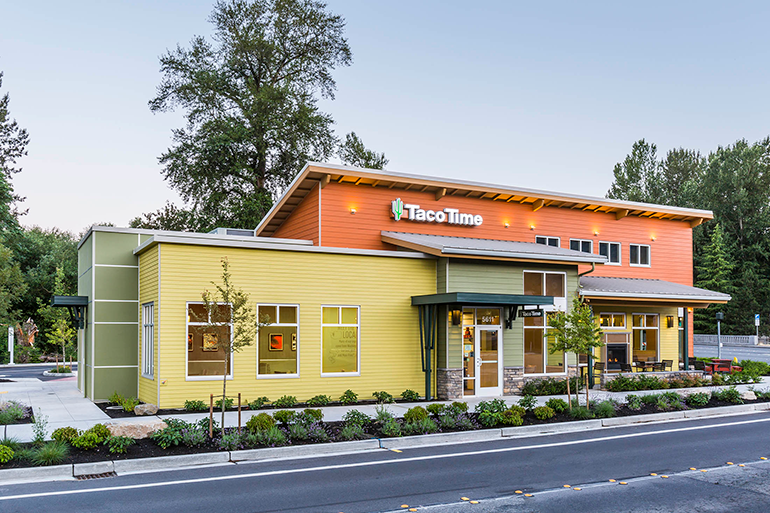 Benson said the chain’s packaging costs went up about 20% with the move — though the cost of compostable materials has gone down since they first started, it’s still more expensive than traditional plastic.

Eleven of the chain’s restaurants are not served by a compost hauler, so they can’t participate — though they still purchase compostable products. Those restaurants are forced to send it to a landfill, for now.

Perhaps the biggest downside is that about 70% of Taco Time’s sales are through the restaurant drive thrus or to go, which means guests dispose of packaging elsewhere, and only a few locations allow food waste packaging into residential compost bins.

But the upsides far outweigh the bad, Benson said. In 2017, Taco Time estimated it had diverted 1,900 tons of compostable material from the landfill — enough to build a community garden the size of half a football field. It had created 37,000 bags of compost, or enough to fill 15 school buses.

It also reduced the chain’s carbon footprint by the equivalent of taking 220 cars off the road, or what is typically generated by 165 households, Benson contends.

To other restaurant operators, Benson suggests finding a compost hauler and working with them to source the right packaging material to make it work.

“It has to be simple. If you make people sort, it’s not going to work,” said Benson. “But we found about our guests that everyone really cares about this issue.”

Restaurants in fight for survival, House panel is warned
Sep 25, 2020