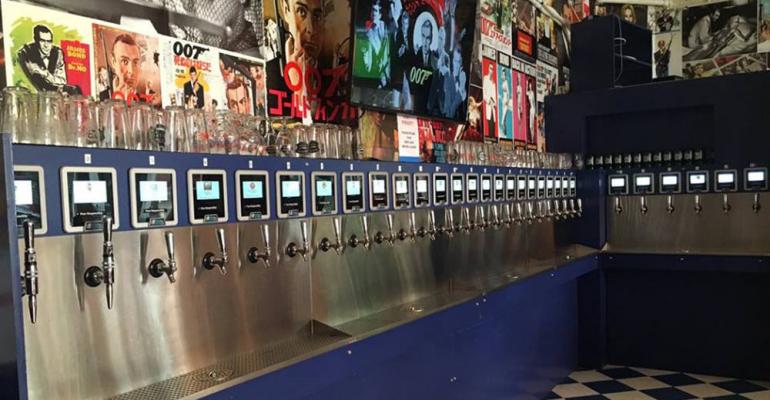 Is self-serve wine and beer a good idea for your business?

Today’s consumer loves convenience and new experiences, which is exactly what a self-serve beverage system delivers.

Access to a variety of alcoholic beverages when and where guests want them minus the wait time seems like a win-win for everyone. But is it right for your restaurant?

The average self-serve beverage system works like a vending machine with a loadable card or wristband.  Customers can either pre-pay, setting their own limit, or start a tab and pay at the end of their visit. A simple swipe of their wristband, or insert of their card, allows them to purchase beverages by the ounce — typically one, five or eight ounces at a time.

At JJ’s Wine Bar (above) in Franklin, Tenn., 28 different wines are available to self-pour by using a smart card. JJ’s co-owner Lisa Judd said in addition to trying wines they may not otherwise order from a wine list, guests using the self-serve system can take their time reading the wine descriptions and labels before making a decision.

“Guests can taste a very expensive wine, without committing to the entire bottle,” Judd said. “We’re able to offer three pour sizes: one ounce, five ounce and eight ounce; you won’t find that on most wine lists.” Customers at Tapped (left), which opened this May in St. Louis, Mo., use a wristband to access 39 beers, eight wines and one coffee tap, according to owner Ryan Reel. The restaurant uses the iPourIt system.

“My wife originally came across a wine-dispensing system, but we’re in St. Louis, which is big-time beer country, so I felt that we needed to do the same type of thing with beer,” said Reel. “We go through 25 to 30 kegs per week that vary in size and are all local to the Midwest.”

Paloma Rocket opened a year and a half ago with 30 self-serve beer and wine taps in New York City, using the Pour My Beer system. Creative director Allan Mannarelli said the restaurant is already planning a move into a larger space that will accommodate 50 taps, allowing them to provide a larger selection along with on-tap mixed drinks.

“People really like the interactive nature of it; they love touching stuff,” said Mannarelli. “They can taste a lot of different beers and remove the human element of the snarky or overworked bartender.”

Operators can pre-set limits on how much alcohol will be dispensed to each customer per visit or per day, with most systems having a default setting of 32 ounces.

“We’ve set our system to dispense 40 ounces since we have 39 beers; with that you could sample all of them,” said Reel. “On average, most customers only pour around 25 ounces.”

“Our system dispenses 32 ounces per customer,” said Mannarelli. “People also seem to be a little less price sensitive when they’re buying small quantities, so on a pint basis, we may price a little more aggressively.”

Operators may choose to vary dispense settings depending on whether or not they serve food. While Tapped serves a full restaurant menu, JJ’s Wine Bar focuses on small plates, and Paloma Rocket does not serve food.

The cost up front to install self-serve beverage taps depends on how many you need and which beverages you’ll be serving. Stand-alone taps and side-by-side taps can accommodate beer, wine, coffee or mixed drinks. They are typically priced per tap, and price does not include the cost of moving beer lines or electrical to accommodate the system. Monthly service fees also apply, based on number of taps.

At Paloma Rocket, for example, the initial investment was about $1,500 for each of the roughly 30 taps installed. Monthly fees total about $244, said Mannarelli.

While the costs upfront may scare some away, the savings on the backend can include portion control, less product waste and reduced labor costs.

“The machines are extremely accurate,” said Judd. “Our wine-dispensing machines ensure that the wines are always fresh and that guests enjoy their wines at the optimum temperature.”

“Profits increase because you’re not dealing with any waste,” added Reel. “Customers can sample everything on tap if they want. The typical bar or restaurant may give you a couple samples, but after that they want you to pony up for a full glass. Customers leave here having spent under $10 and have sampled most of the beers.”

“There’s a reduction in labor costs, too,” added Reel. “If we weren’t also a restaurant, the labor costs would be reduced greatly because you’d only need someone for the check-in, explanation process and glassware.”

Before you let go of your servers in lieu of self-serve, there are a few important service matters to consider.

“For all new customers, the wine-dispensing machines require a brief explanation,” said Judd, who sees a 50-percent repeat customer rate in the tourist-friendly area of Franklin. “It’s important that guests feel comfortable using the machines, and it takes time to explain how to use them and what to expect.”

In addition, without careful marketing and promotion, guests may dismiss or be unaware of other offerings you may have available.

“Because customers are so drawn to the wine-dispensing machines, they don’t realize that we have an extensive bottle list, as well as a full bar,” said Judd. “If we were to open another location similar to this, we would install a bottle-storage system that prominently displays our by-the-bottle selection.”

Judd curtails some of these issues by offering repeat guests a VIP membership program, which provides discounts to tastings and invitations to exclusive events.

Mannarelli is looking forward to future integration of technology with his system.

“I’d like to be able to update guests and have more interactivity with them via our technology,” he said. “We’d like our pour system to be more integrated so we can alert guests about new offerings and let them know what they had last time.”