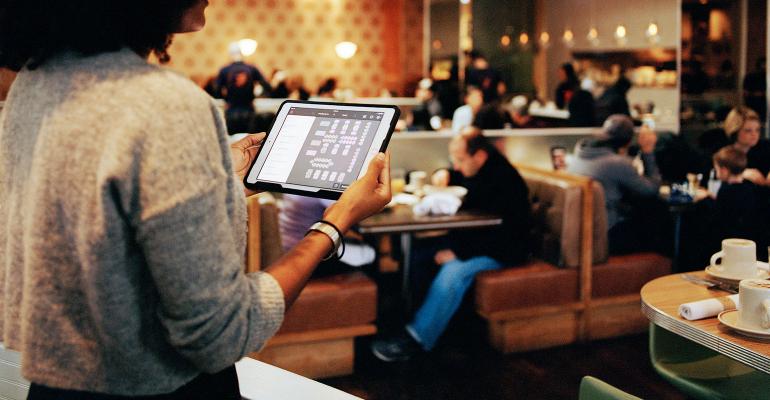 Open Table
OpenTable has been a leader in online restaurant reservations since it was founded in 1998. But it’s fending off competition from a number of other services.
Operations

The battle for online bookings

Since it first launched officially in 1998, OpenTable has been the leader in online reservations, with more than 42,000 restaurants around the world in its network. But now a number of competitors are battling furiously to steal market share, attempting to challenge OpenTable’s leadership.

And the battle is now about a lot more than just offering diners a convenient way to book reservations.

The leading reservation-tech players, including OpenTable, Yelp Reservations, Resy and Tock, are rapidly expanding their services, positioning themselves as the central nervous system for the front of the house with features like table management, guest notes, customer feedback, mobile payment options and data that can be used by restaurants to create more efficient operations.

“Booking is a function now that’s part of a much larger equation for any restaurant that’s running intelligently,” said Ben Leventhal, CEO of Resy. “Given how scarce resources are and inventory is, the idea of booking has to be part of a more sophisticated understanding of what’s going on in your restaurant.” Many of these players have also found powerful partners that open up new marketing opportunities for restaurants.

And while the majority of diners still make reservations by calling the restaurant on the phone, that business model is quickly becoming obsolete.

“Online reservations has become a utility, like gas or water or electric,” said Michael Mindel, former chief marketing officer for the Il Fornaio chain who recently launched restaurant management and consulting firm Restaunomics, based in Sausalito, Calif. “But the question is how much you want to pay.”

Here’s a look at the top four players in online booking space:

Three years ago, OpenTable was acquired by The Priceline Group, bringing in significant resources and the potential for a huge marketing platform, enabling the travel website to serve up restaurant options nearby when hotels are booked, for example, and allowing guests to book their dinner reservations too.

“We have the vision to become a global dining passport, so anywhere people are, they can open the app and get a suggested list of restaurants tailored to them for that location and it can be uniquely helpful for someone who’s traveling,” said Jampol.

While OpenTable has long focused on filling seats, now the tech company is building on tools that allow restaurants to run more efficiently.

Shifting to a cloud-based system, among newer features is Guest Center, which gives restaurants table management tools and allows them to keep notes about guest preferences that can be accessed across multiple locations and through any mobile device.

Earlier this year, OpenTable announced a joint integration with QSR Automations that will put many casual-dining chain restaurants on the network. Guests will be able to use the app and website to check wait times and put their names on a waiting list.

Rolling out through Guest Center is the ability by guests to choose to communicate with restaurants by text, rather than email. In test are more features, like the ability to offer special prix fixe meals, and the use of loyalty points to access hard-to-get reservations at the hottest restaurants.

Jumping into the fray in a big way in recent years is the review site Yelp, which acquired both the reservation site SeatMe in 2013 and the wait-list tool Nowait last year.

Yelp is already the leading online platform diners use to find restaurants, boasting about 99 million unique users on mobile alone every month. Now the company is adding in the booking tool in a growing number of markets.

The alliance with Nowait allows guests to put their names on waiting lists at venues where reservations are not taken. Nowait has about 5,000 restaurants in its network.

That means consumers can go to Yelp to find a restaurant, read or leave a review, book a reservation, check out wait times and get on a waiting list, as well as ordering delivery in markets where that’s available, and, soon, get free Wi-Fi.

Prabhakara said Yelp also offers guest services, allowing restaurants to keep track of diner preferences, like allergies or what wine they like.

Resy earlier this year completed a $13 million round of financing led by Airbnb Inc., which is integrating the reservation player into its platform.

The move will eventually allow Airbnb app users to find and book restaurants wherever they are traveling, at least in cities where they both operate. The Airbnb/Resy partnership is currently in beta test in San Francisco.

Founded in 2014, Resy is in 80 U.S. cities with its software, allowing restaurants to book diners through their own websites. In 16 markets, the Resy app serves as a sort of marketplace, helping diners find great restaurants to book a table, and even use the app to pay. Both sides of the business are growing and, in time, will blur, said Leventhal.

Among restaurants in the Resy network are noteworthy operators, like the new-and-improved Union Square Café, Chez Panisse and Houston’s parent Hillstone Restaurants.

Over the last 18 months, Resy has been working on guest communication and how it can reduce things like the no-show rate, which is less than 5 percent, said Leventhal.

Resy offers guest management features. And the company sees an opportunity ahead in helping restaurants with yield management, he said.

“There are a lot of tables let go and under used, whether that’s because of miscalculations in turn time and things of that nature, or just because there isn’t great visibility today on the relative value of one reservation to the next or one night to the next,” said Leventhal.

This year Resy began offering more data and analytics allowing restaurants to track turn time, loss on wait lists and how that ties to revenue, and there’s more to come, he said.

The Resy widget is platform agnostic, so restaurants can allow guests to book through Facebook, for example.

“The idea use to be that if you had a presence on a couple of these monolithic platforms, you were addressing your marketing needs,” he said. “Restaurants have to look at offering booking functionality really anywhere consumers may be.” Tock was co-founded by Nick Kokonas, who is also an owner of The Alinea Group in Chicago that operates the restaurants Alinea, Next and The Aviary.

The site has more than 200 restaurants within its network, said Kyle Welter, Tock’s director of marketing, including venues like Eleven Madison Park, Single Thread and The French Laundry.

Tock is known more as a site for restaurants that use a ticket system for pre-set menus and events that are pre-paid up front, or that ask for a deposit, though regular free reservation booking is also available.

Kokonas openly speaks of “trying to get rid of OpenTable and their dinosaur technology,” as he wrote in a Reddit discussion recently.

Restaurants, he argued, are one of few businesses that incur almost all production costs up front, so it makes sense to ask diners to pay ahead for a unique experience, the way they might pay for tickets to the theater or a concert.

Largely as a result of the pre-payment aspect, Welter said Tock’s no-show rate is below 1 percent.

• OpenTable: $249 monthly flat fee plus a 25 cent fee per diner per booking through the restaurant’s website, or $1 per diner if they come through OpenTable’s website or app
• Yelp Reservations: $249 flat monthly fee with no additional charges per booking.
• Resy: Range of prices available, depending on features needed, from $89 per month to $899 per month.
• Tock: Range available, from $99 per month, plus 99 cents per cover, to $695 per month with unlimited covers.