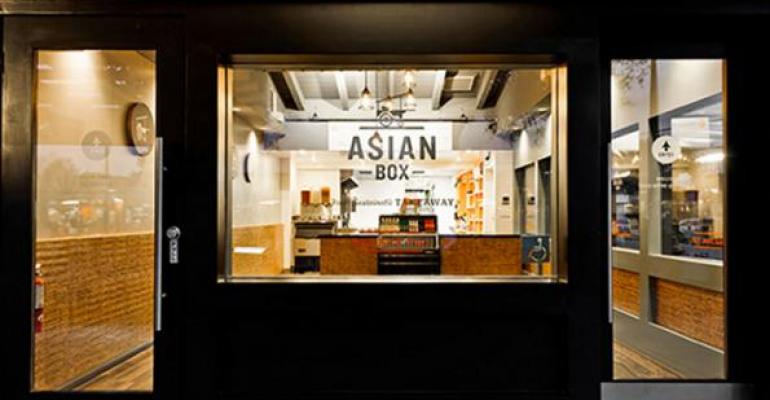 Sometimes it makes sense for a restaurant chain not to grow — such as when leases are too costly.

So the five-unit healthful Vietnamese street food chain Asian Box held off, and waited. When the real estate deals started improving, the chain signed up for new locations. And now Asian Box is armed with another investment round to fund those units.

“We have seven signed deals in northern and southern California,” chain cofounder Frank Klein says. “Our goal is what it always is, to prudently build out stores with fantastic real estate. But for a while we couldn’t find any.”

Klein and Grace Nguyen opened the first Asian Box in Palo Alto, Calif., in 2012. The concept offers healthful Vietnamese street food, including meat raised without hormones or antibiotics, housemade sauces and a customizable menu. All of the company’s locations are in California.

The chain had expected to get to nine units by the end of 2015. But Klein says that the market for good real estate was a major challenge.

“For the last two years, people were taking deals we wouldn’t have touched with a 10-foot pole,” Klein notes. “Now, deals three years ago that we wouldn’t touch, they’re coming back to us. We’re in a good position as a well-funded, strongly operated fast casual chain.”

Investors have pumped a lot of money into small fast-casual chains in recent years, giving small concepts millions and demanding growth. That had to make it difficult for a concept like Asian Box to turn down leases as too costly.

Yet Klein says his company has been fortunate because its investors see the big picture.

“Nobody wanted to take deals that were just not prudent.”

Klein would not divulge the amount of funding in the latest investment round. But he said it came mostly from existing investors, including the Horowitz Group, a family office that has invested in such concepts as Lemonade Restaurant Group and Sprouts Farmers Market. Horowitz first invested in Asian Box last year.

“Most of our key investors doubled down,” Klein adds. “And were quite happy to do so.” The company plans to use the funding to hire new executives and fuel that expansion. With the seven signed leases, Asian Box plans to open a store every 45 days through the summer.

That should help the company generate positive cash flow, something Klein says is “close at this point” with just five units. “It’s better to be making money than not,” he says. “Our stores are doing well.”

The investors have been helping with the business, and are eager to do so even though they have many, larger investments. “We are their smallest investment,” he adds. “But they spend so much time with us. When we want, we get their ear. We get their thought process, answers to questions and access to investors. It’s a strong, strong group.”

At this point, Klein says business is good, despite some challenges in the California market.