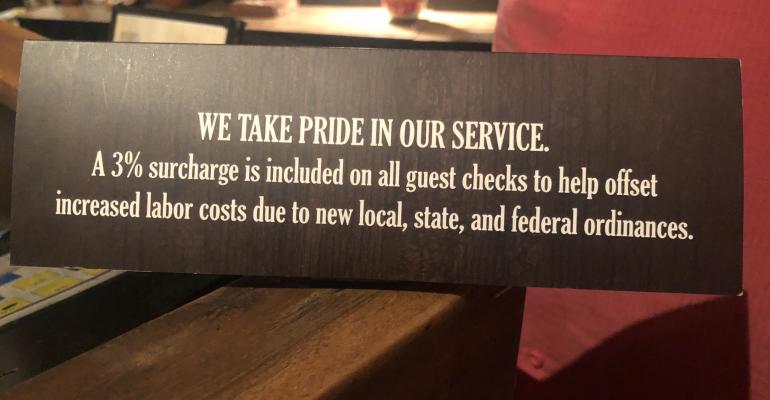 Are restaurant surcharges becoming the norm?

Pineapple & Pearls is latest to add 5% charge for ‘People Program’

The Washington, D.C. restaurant Pineapple & Pearls this week added a 5% “People Program” surcharge to checks, with the proceeds going to employee benefits.

The use of a surcharge is a growing trend that has been in play for years, primarily on the West Coast. It seems to be catching on across the country as restaurant operators struggle to adapt to rising labor and other operational costs while not wanting to jar customers with higher menu prices.

According to the Washington City Paper, the People Program at Pineapple & Pearls began Oct. 1, and will likely be rolled out to the group’s other restaurants, which include Rose’s Luxury and Little Pearl.

The restaurant’s website indicates the surcharge will allow for an expansion of benefits, including a 401(k), additional paid time off, and an employee assistance program with support for mental health issues, substance abuse and family counseling. This in addition to existing benefits, which include health and dental insurance coverage for staffers who work four or more shifts per week, paid time off, parental leave and free gym membership.

Pineapple & Pearls is a very high-end restaurant, so the surcharge will likely add about $32.50 to a typical check for seating in the dining room. The nine-course dinner for two with standard beverage pairings and no add-ons is $650 ($325 per person), an all-inclusive price that covers both tax and tip. The People Program charge would bring that total to $682.50, or $341.25 per person.

The restaurant website says that, aside from the administrative costs associated with the surcharge, 100% will go toward funding benefits and workplace initiatives. Owner Aaron Silverman, whose Little Pearl added a Michelin star to the group’s collection this week, declined to comment further on the new program beyond the website explanation.

Reports indicate the surcharge trend is growing in cities like Atlanta, Austin, Texas, Chicago, Denver and Santa Cruz, Calif.— and not without pushback.

Though the trend has been growing for years, some customers are taking to social media to express surprise when they discover it on receipts.

The food was good tonight, so I don’t mind paying for the health insurance for the guy who made my sushi. Wait, what. pic.twitter.com/0n9SjNaNP2

It’s not that he doesn’t want the sushi chef at Chicago’s Arami to have health insurance, tweeted Darren Rovell, a sports business reporter for CNN and ESPN with a large social media following. “It’s weird as hell to itemize it,” he said in the thread. “Is there a line item for electricity?”

Such surcharges range generally from 2% to 5%, and most are presented to guests as optional, though some are not. 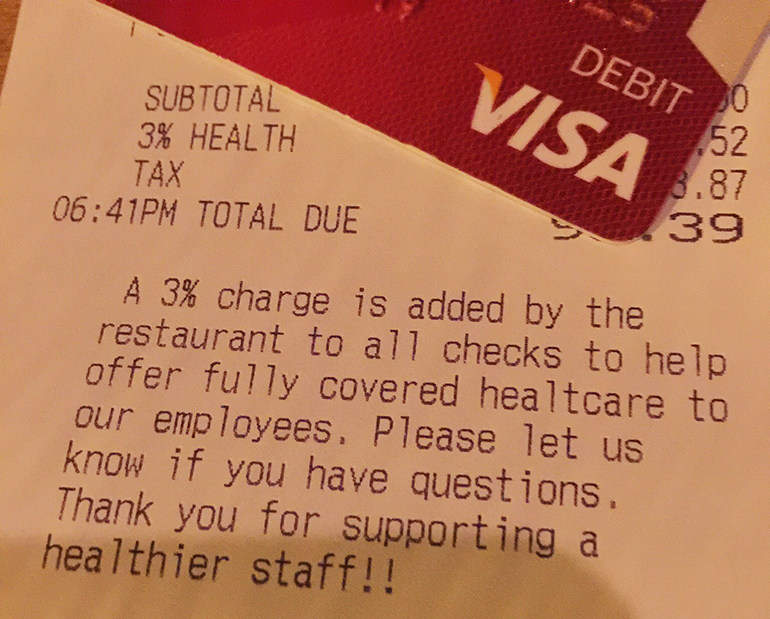 In San Diego, for example, restaurateur David Cohn started applying a surcharge in 2017 to restaurants throughout his Cohn Restaurant Group, which operates almost 30 restaurants, such as Island Prime, Coasterra and Corvette Diner. The optional 4% surcharge goes toward providing better wages and benefits, and few diners request for it to be removed from the check. Most pay a tip on top of the surcharge, so that means tips are also higher, he said.

“It’s not an elegant solution,” he said. “We wish there were another way of dealing with these increases (in labor costs). And we’re not opposed to the increases — people say ‘You don’t want to pay people more,’ but we’re happy to pay more. We just have to maintain some profit.”

Jed said her restaurant’s surcharge “helps offset but doesn’t cover my entire healthcare costs (for workers). In our case, it maybe covers 20% of costs. But it’s rising costs.”

Restaurants today are struggling like never before with those rising costs, which include not only a higher minimum wage but also sharp increases in rent in many cities, heavier regulatory burdens and consumers shifting to delivery, which can pull another 25% to 30% commission fee for third-party delivery providers out of every sale.

A surcharge is seen by some as a better alternative to raising menu prices. At least guests aren’t required to pay tax and tip on that additional fee, Jed noted.

Jed sees the balance between restaurant openings versus closings shifting more toward closures in recent months.

“When margins are 3% to 5% on a good day, at net zero it becomes a little painful,” she said. “Restaurants manage by the penny. These small changes can help offset rising costs, but it’s getting to the point where we’re kind of running out of bullets. We’re not whining, we’re warning.”

Video of the week: Restaurant tries adding health surcharge to bill
May 05, 2017