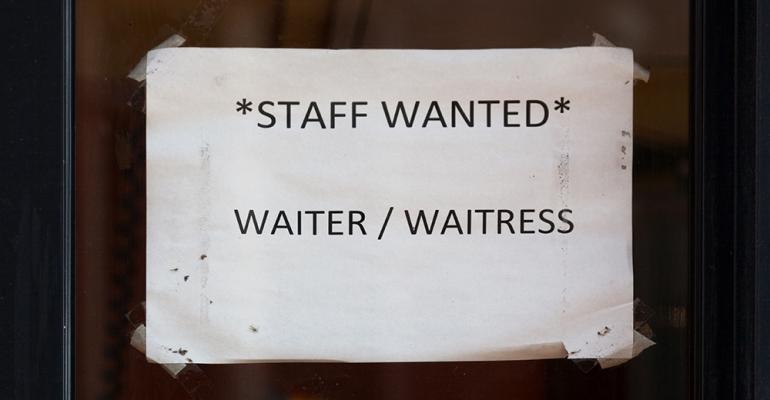 Gwengoat / iStock / Getty Images Plus
What restaurant employers are doing about the labor crisis; Tock’s 2020 financials revealed plus other things you may have missed last week.
Operations

5 things: What restaurant employers are doing about the labor crisis; Tock’s 2020 financials revealed

Plus, a vaccinated-members-only club opens in Los Angeles; March sales for restaurants are up

Across the industry, there has been a shortage of willing workers for restaurants. The industry still remains 15% below pre-pandemic job levels, according to the Bureau of Labor Statistics’ March 2021 numbers.

Troy Guard of the Denver-based TAG Restaurant Group, said, “Labor is so challenging because now we’re having to pay dishwashers $18-$20 per hour and having to put service charges on check to help with BOH.” Guard said TAG gave back-of-house workers raises of $2 to $5 per hour “to keep people working and happy.”

“There’s been a new focus on hiring,” Barry Gutin, principal and co-founder of Cuba Libré said. “We need to bring new people into the hospitality industry, as well as bringing back those who have temporarily left the industry. The pandemic has made hiring a challenge. We brought on our first director of training and a company called Workstream, an application process which is completely online.  It pushes out job listings to job sites as well.  This helps us attract and process quality applicants.”

Squarespace, which acquired Tock earlier this year, filed to go public last week via direct listing on the New York Stock Exchange. At that time the company had to reveal Tock’s 2020 financials, which were previously private.

Tock’s 2020 revenue totaled $23 million (Squarespace bought the company for more than $400 million) with $9.6 million coming from transactions on Tock’s own processing system and another $3.4 from monthly subscription fees from customers.

The reservation app charges 3% plus payment and processing fees to restaurants on the “to go” platform, but that number decreases to 2% when a restaurant is a subscriber. Pricing ranges from $199-$699 per month.

Squarespace also shared details about its valuation of Tock. The company valued Tock’s technology at $4 million, the tradename at $6 million, $19 million for enterprise customer relationships and $64 million for its relationships with restaurants. Net assets acquired were just over $90 million, leaving $336 million of goodwill from the new parent company for future endeavors.

After its initial November opening was delayed due to COVID-19, John Fraser’s newest restaurant in New York City finally opened last week. Iris, located in Midtown Manhattan, is more of a homecoming to the established chef of the Loyal, North Fork Table and Snack Taverna. With an almost entirely Greek menu, the Greek Fraser told The New York Times, “it’s the food I really love.”

Customers can expect tzatziki flecked with sorrel; lamb tartare with ramp labneh; lemon potato salad; sweetbread kokoretsi with purslane and lemon; snapper braised with leeks and kalamata olives; lamb marinated in mastic and served with scallion pancakes. The restaurant is led by executive chef Rob Lawson who worked with Fraser at 701West.

Beverage director Amy Racine helped Fraser gather wines from Greece and Turkey as well as a cart of digestifs that are accompanied by a dessert cart for after dinner.

The restaurant has 68 seats indoors at full capacity as well as outdoor seating. New York City is currently only at 50% indoor dining capacity.

A new bar in the Los Angeles neighborhood of North Hollywood called Risky Business has opened as a members-only club for those who are fully vaccinated against COVID-19. Located inside 10-year-old cocktail lounge Other Door, members will be able to play pool, eat, drink and socialize with strangers without any masks.

Before signing up for a membership, customers must fill out a questionnaire with vaccine dates and type in addition to verifying their personal information.

“We have lots of friends, especially those on the front line in the medical field, who want a place where they can hang out and unwind,” Other Door Ari Schindler told Eater on the inspiration for the new concept.

Currently, memberships are on sale for $10 but will eventually be raised to $20. A priority system based upon time of joining will eventually unlock more privileges for members. Current perks include a special drink upon your first visit where “the earlier you join, the more incredible your drink will be,” Schindler told Eater.

After a full year of the coronavirus pandemic, restaurant sales showed signs of returning to normal for the month of March according to research firm Black Box Intelligence, which collects data mostly on chain restaurant performance. Same-store sales not only crushed March 2020 but were higher than March 2019 across the restaurant industry. Similarly astonishing, same-store sales growth over two years was 1.8% for the month of March, the first-time two-year growth has been positive in over a year.

The first quarter of 2021 ending March 31 was the strongest financial quarter for the industry, based on two years same-store sales growth, in over a year.

And among consumers, sentiment continues to be positive. Customers are responding most positively to restaurants that have an element of service, according to Black Box Intelligence.