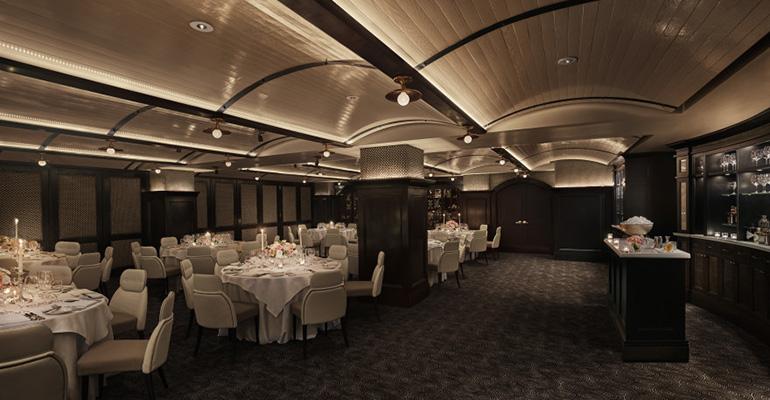 Del Posto
NYC’s Del Posto is sold and will be converted into three new concepts plus four other things you may have missed.
Operations

5 things: NYC’s Del Posto is sold and will be converted into three new concepts

Plus, California on track to fully reopen by June 15

The reservation app OpenTable has announced two new resource hubs, “Back to the Table” for consumers and “At Your Service” for restaurants as diners return. The consumer service will include a heat map of reopenings, arranged state-by-state, a list of restaurants “open near me,” popular restaurant picks based on diner feedback, as well as stories from restaurateurs from the past year.

For restaurants, the “At Your Service” feature provides data and tips on reopening, state-by-state guidelines for capacity restrictions, how to reopen books, benchmarking data, waitlist creation, setting capacity limits and more.

OpenTable reports that dining levels on their app are currently at 90% of 2019 rates.

California has been among the strictest states when it has come to reopening throughout the pandemic, (indoor dining wasn’t even allowed until 2021) but Gov. Gavin Newsom announced last week that the state would be fully reopening on June 15 — ahead of more than half the country — if health metrics stayed on track.

As part of the reopening, mask requirements will remain in place for both customers and workers in every business and capacity limits will be lifted. “We can now begin planning for our lives post-pandemic,” said Newsom at a press briefing.

The reopening is reliant on hospitalizations remaining low and the availability of vaccine doses for those who want them, according to Newsom, but he said he was confident the state would meet both requirements ahead of the deadline.

California on June 15 will also end its four-tier, color-coded system that’s been in place since the beginning of the pandemic.

Both the Centers for Disease Control and Prevention and White House Chief Medical Advisor Dr. Anthony Fauci warned that individuals and states should remain vigilant about safety protocols as they attempt to resume life-as-usual.

After 16 years, Del Posto, the fine-dining restaurant from Lydia and Joe Bastianich, has permanently shuttered after its sale, according to The New York Times.

The former owners sold the restaurant to executive chef Melissa Rodriguez, with partners Jeff Katz, Del Posto’s former general manager, and chef James Kent. The new owners immediately closed Del Posto with the plan to create a new, three-concept restaurant in the space, which is scheduled to open this fall. The terms of the deal were not disclosed.

The New York Times reported that the new concepts will be “in the Del Posto spirit” but a departure from the original, as the new owners want to make a “clean break from the restaurant’s past owners.”  There will be a cocktail bar, a casual restaurant with wood-burning pizza ovens and an ambitious, special-occasion Italian restaurant.

While once the pinnacle of fine dining — the restaurant once achieved a four-star review from The New York Times — Del Posto was caught in the wake of the #MeToo movement after former owner Mario Batali was accused of sexual assault by multiple women publicly.  Batali divested his interests in all his restaurants in 2019, including Del Posto.

A report in Eater from 2017 also accused the parent company, B&B Hospitality, of fostering a toxic work environment at its restaurants calling it a “boys club” where owners like Joe Bastianich were “sleazy” and grabbed women.

The restaurant has been closed since March of 2020 when indoor dining initially shut down because of the pandemic. The new owners are currently auctioning off Del Posto’s items before renovating.

“Hot Dog Shoppe was founded early in the post-war golden years of the creation of the fast-food restaurant boom,” said Greg Vojnovic. “It has survived through many of the ups and downs of the last 75 years by staying true to Paul Trevelline’s vision: high quality, simple food sold at a pleasing price. We will remain true to that vision and make sure that Hot Dog Shoppe remains as vibrant as part of the communities as it is today.”

The company had been family-owned for 75 years (since its creation) before the sale and features hot dogs, chili dogs, hamburgers and fresh cut fries at its locations in Warren, Girard and E. Liverpool, Ohio.

Ray Trevelline, a founding family member, said “My family and I founded the Hot Dog Shoppe in 1946 and have put everything into our restaurants. We wanted to make sure we chose the right person to carry on our traditions. We could not be happier that Greg will steward the company going forward.”

Uber Eats announced Tuesday that the company has added multiple new features for operators, including an option to integrate their Uber Eats profile with their Instagram feed, and the ability to post updates like menu changes, specials and news for customers to the newly launched Merchant Stories.

Both features are free of charge (aside from Uber Eats’ normal fees) and are meant to give restaurants more visual storytelling capabilities through their profile, the third-party delivery company said.

Any restaurant operator can opt to connect their Instagram feed to their Uber Eats profile, and then the latest photos will show up whenever hungry customers peruse their page. Although operators will not be able to directly communicate with customers via the feature, they will have access to analytics that can break down their audience engagement and reach via pageviews and clicks.