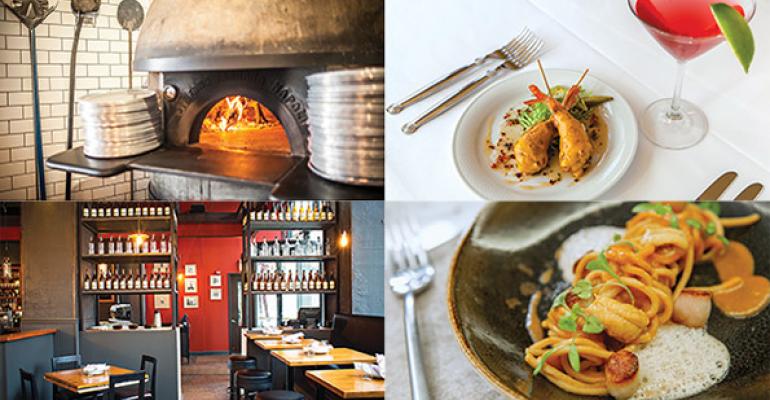 Need a little rehab? Take a cue from these makeovers that are enhancing both appearance and profitability. &bull; See more Operations articles 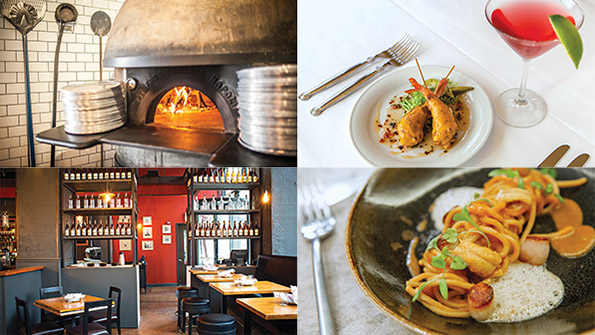 It seems after every renovation project is finished there comes a time when we look back and say, “I could’ve done that better.” Even if you nailed it the first time and business is booming, there are always small tweaks that can be made to push business forward. Maybe the color of the walls in the dining room reflect too much light, the kitchen flow is just a bit off or the bar stools are a tad uncomfortable.

The passing of time does not help. What intrigued diners a decade ago is passé, and cutting-edge concepts now seem like yesterday’s news.

Today, restaurateurs are using renovations to explore more than just a touch-up. Some are expanding their menu, others are targeting a new clientele and the most ambitious are changing their concept altogether. Here’s a look at four recent restaurant renovation projects that stood out for the impact they made on business moving forward.

When Café Adelaide and The Swizzle Stick Bar opened a decade ago in the heart of vibrant New Orleans, owners Ti Adelaide Martin and Lally Brennan put cocktail hour back on the map. These ladies love the cocktail culture, and they do it the right way—with carved ice, fresh ingredients and, ultimately, class.

As elegant as the bar and restaurant became, the design fell out of favor fast. Ti and Lally will admit they liked the original feel but never really loved it. And you can only look at brown, zebra-striped walls for so long.

So for its 10-year anniversary, the ladies said it was time for the restaurant named after their Aunt Adelaide to “keep up her appearances.” The walls were painted with a high-gloss white lacquer that really pops, and new “pearlized” tabletops add to the fresh, vibrant look. Uniforms were revamped to a small, black gingham design complemented by yellow bowties with faces of Adelaide on them, and black pants with a long, white bistro apron. Suddenly the place is again edgy, outrageous and fun, but still breathes of Aunt Adelaide’s bold personality. Three Warhol-ish photos of her in bright colors were hung on the wall across from bay windows that let in the daylight. It’s a sexy look for Adelaide.

Along with touching up her makeup, Café Adelaide went through some operational upgrades as well. Designers added a unique Bar Chef’s Table, where diners can get up close and personal with their mixologist and reimagine the relationship between food and cocktails. Working in the restaurant day in and day out, the ladies realized it made sense to flip the hostess desk to the other side of the entryway to give diners a better view into the lobby. And old booths were restored to add some authenticity to the place.

The whole project forced the bar/restaurant to close for a total of three days. “We’ve always got to stay ahead of the game,” Brennan says. “We wanted something that looked sophisticated and sassy but still warm at the same time.”

It’s a perfect look for “Brunch with Hattitude,” offering complimentary drinks for those who come in wearing a hat, and the Swizzle Stick’s legendary 25-cent martinis during lunch time. “The promotions just fit with the design and décor now,” Martin says.

Tin Vuong was tired of slinging pizza. He’d been doing it for two years as chef and partner at Wildcraft Sourdough Pizza in Culver City, CA, and his slow-rising sourdough, which takes several days to prepare, had really gained traction. Business at the full-service restaurant was good, but Vuong knew there was opportunity for it to be better.

He and his partners in Blackhouse Hospitality Group kicked around the idea of broadening the menu and placing more of an emphasis on entrees and salads. What they came up with was not only a unique way to keep the panache of the pizza and boost check averages at the same time, but also an exercise in branding. In August 2014, Blackhouse remodeled the space to make it more sophisticated, adjusted the menu to reflect a Northern Italian sensibility and called it, simply, Wildcraft.

“We wanted more than just the foodies and the hipsters,” Vuong says. “Guests wanted a bigger variety of lunch items and the servers were asking for more things to sell.”

A big part of the redesign was the addition of a full liquor license. Previously, a typical table might be two female diners sharing a pizza and each having a glass of wine. Check averages were limited. Now diners have a variety of menu items to choose from, as well as Italian-inspired cocktails to complement the cuisine. “Getting a full liquor license changed the dynamic of the dining experience,” Vuong notes. “Just wine and pizza is great, it works, but for how long? Having a traditional restaurant allows us to focus on the seasonality of different foods.”

There were about two months of preparation, and the restaurant was closed for about a month during the transition. Most of the time was spent getting the new bar certified and up to code. Today, the dinner crowd is bringing in a different clientele, and the drinks-and-pizza crowd has been pushed to later in the night. Check averages are up about 20 percent, Vuong says. “It was pretty much a no-brainer.”

Troquet lightens up a bit

Troquet River North’s story will hit home with many Restaurant Hospitality readers. The Chicago restaurant opened originally as LM Bistro, an upscale French concept featuring sophisticated cuisine and authentic European-style dining. But, as we all know, white-tablecloth restaurants are a tough sell today.

For LM Bistro, Chicago’s River North neighborhood proved to be a difficult location to attract fine-dining guests. And, in many ways, the upscale menu fit best at dinner only, limiting the amount of lunch and brunch business in a walkable neighborhood where foot traffic is prevalent all day.

So owners Stephan and Nicole Outrequin Quaisser made the tough choice to bring it down a notch. With the new name—Troquet is French for “small café”—chefs Benoit Fliou and Martial Noguier pared down the menu and shifted focus toward French small plates and a kick-ass wine list. The Quaissers modeled the restaurant after a troquet found in France—dishes can be done family style with less emphasis on presentation. They kept the sophistication and the staple menu items from LM Bistro—croquets, steak frites, seared raw tuna with arugula—but moved from a full-service dinner menu to a bar-sized menu that complements the 10-tap wine system.

Not only did the menu shrink, but the atmosphere needed to change to reflect the more casual vibe. Stephan sourced rustic tables and chairs, had several of the walls repainted and added some small windows between a private dining room and the kitchen, allowing guests to peer in as their dishes are prepared. They replaced a baby grand piano with an upright model and continue to host open-mic nights, albeit much less formal. They added TVs within new shelving behind the bar. They created a new logo and added it to hundreds of wine bottles and used them to decorate, allowing light to pass through the glass in all the right places.

Keeping a lot of the decisions in house allowed the Quaissers to reconcept the restaurant on a low budget, Nicole says. The transformation took less than a week and the restaurant closed for only three days. “People used to look in and think it was too expensive,” she says. “Now it’s got a really a warm, comfy and sexy feel. We wanted them to feel really comfortable and know they can afford to come in and have a drink with us.”

Scaling back the number of entrees lowered food sales, but Nicole says that was expected and the missed revenue has been “completely made up” by volume. While food previously made up the majority of LM Bistro’s sales, today about 70 percent of Troquet’s revenue comes from beverage sales, where margins are much higher.

Trouquet has been opened just more than a year, but it took until the 2014 holiday season before the Quaissers knew they had made the right decision. Brunch business is up 30 percent. “We are really happy with the change,” Nicole says. “We are seeing increased revenue already, and while we’re not quite at the final goal, we’re definitely on the right track.”

Bryan Voltaggio’s Range restaurant in Washington, DC, open since 2011, had already made its mark. The restaurant was consistently busy, diners were leaving more than satisfied and Voltaggio himself—a James Beard finalist—was slowly but surely becoming a national celebrity chef.

Already the owner and executive chef at four DC-area restaurants—Volt, Lunchbox, Family Meal and now Range—Voltaggio began playing with the idea of a regional Italian concept and started scouting locations. Meanwhile, at Range, a design flaw was becoming increasingly apparent. One of the rooms away from the open kitchen wasn’t getting very much traction and began, in Voltaggio’s words, to feel boring. “It felt like a banquet room, and we were trying to find ways to make the space more exciting,” he says.

Then it donned on him: why not build out an Italian concept—named Aggio—right within Range? And that’s exactly what he did. It took a lot of preplanning, but ultimately only nine days and $80,000 to open a second restaurant concept within the first, without ever having to close Range.

Voltaggio built a great deal of buzz on social media by teasing the new concept but not revealing the location. There were rumors of a pop-up restaurant. But Voltaggio’s vision and innovation came to life when Aggio opened on Valentine’s Day 2014.

To carve out the space, Votaggio hired a contractor, an interior designer and a steel sculptor. The sculptor, Bryan Slagle, created a host stand and a dividing wall. As for the menu, Voltaggio looked at classic dishes from Italy and melded those inspirations with dishes that reflect the Mid-Atlantic. Then he added a modern twist.

With Aggio, the team has definitely achieved its goal. The restaurant has become part of the neighborhood, business has been booming and the menu continues to receive fantastic response. Guests are coming into both Range and Aggio for unique and specialized experiences, Voltaggio says proudly.