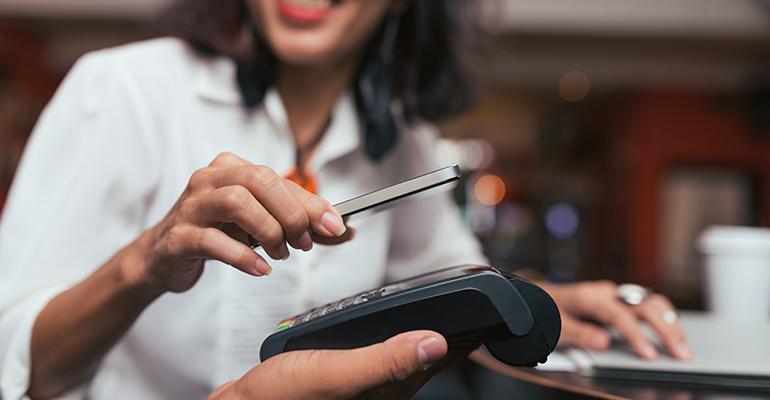 Predictions are my favorite type of self-fulfilling prophecy. Each December when the media rolls out forecasts for the coming year, we technologists have already started to act on the trends that inform our predictions. It’s like asking the bartender, “Hey, what types of beer might be on tap next season?” after he has already chosen them. We’re good “draft seers.”

With that disclaimer, I believe three trends will influence the next year of bar and restaurant technology: the disappointment of EMV, the death of loyalty 1.0 and mobile app overload.

On October 1, 2015, all retailers were supposed to adopt new payment processing rules enshrined by Europay, MasterCard and Visa, a.k.a. “EMV.” Bars and restaurants were supposed to install new EMV point-of-sale systems that read the secure microchips embedded in “chip-and-PIN” cards. As of that date, venues that failed to comply became liable for fraudulent transactions.

In reality, at the end of October, Time reported that just one third had adopted EMV’s new standards.

In the hospitality industry, EMV has been a colossal failure for two reasons. First, when someone opens a tab, bartenders preauthorize the card to make sure it works. They can’t do this with a chip reader, which forces them to close the transaction. Second, chip technology struggles with added tips. If you swipe a $100 meal and then try to add a $20 tip, it won’t work. Until EMV deals with these issues, bars and restaurants won’t adopt the new POS systems.

But the liability shift is a concern for hospitality businesses. Of the $5.33 billion America lost to payment card fraud in 2012, card issuers lost 64 percent and merchants 36 percent, according to the Nilson Report. So I predict that hospitality businesses will turn to mobile payments, which solve the preauthorization problem and reduce the risk of fraud by sending tokens, rather than payment card data, to POS systems.

In other words, the new EMV rules are the best thing that could have ever happen to the mobile payments industry. As bars and restaurants grow disillusioned with chip-and-PIN tech in 2016, mobile payments will gain a powerful ally.

2. The Groupon model will die as restaurants take charge of loyalty.

Groupon and Living Social belong to what you might call “Loyalty 1.0.” They figured out that you can drive consumers to restaurants, bars, etc. with digital deals. Though nominally “mobile,” Loyalty 1.0 made a huge mistake. Today, 84 percent of Millennials act on push notifications they receive, and 61 percent like to have coupons, discounts, immediate deals and rewards pushed to their devices, according to a recent Harris Poll. Yet Loyalty 1.0 prevents hospitality businesses from taking advantage of this revolution in rewards.

Think about it: A restaurant using Groupon might bring in 400 customers but give up 50 percent of revenue on each one. That’s expensive, especially since Groupon and Living Social don’t track long-term results or share customer data. The restaurant has no idea if these Grouponers ever returned. Loyalty 1.0 rewards opportunistic consumption; it is designed without any conception of customer acquisition costs and lifetime customer value. If you can’t reach the customers you supposedly acquired on Groupon, how in the world do you drive loyalty through mobile?

In 2016, restaurants will move to Loyalty 2.0. In essence, they will control their own CRM and loyalty programs. Mobile payments, spurred by EMV, will make this possible.

Normally, it’s tough to get customer contact info at a bar or restaurant. People know that if they leave their card in the fishbowl, they probably won’t win free lunch but certainly will get bombarded with generic marketing offers. In Loyalty 2.0, customers who pay with mobile wallets will be automatically converted into CRM records that, over time, get loaded with rich transactional data. So using information on when customer visit, what they order and how often, venues will run their own mobile, personalized loyalty programs.

Simply put, restaurants will take over loyalty in 2016. They want to own and use customer data like all high-tech businesses do.

Dozens of hospitality groups have developed their own branded apps with varying levels of functionality. Some, like Starbucks’ app, are genuinely useful and facilitate payments. Others push more of a content strategy (i.e. they’re functionally pointless). The problem is that having a dozen restaurant apps on your phone is more of a burden than a blessing. Who wants to register a dozen apps, enter credit info for each one and be pummeled by push notifications? App exhaustion is bad for customers and businesses.

That's why we expect to see centralized Uber-style apps that allow customers to enjoy the same payment and loyalty features wherever they drink or dine. Like independent Uber drivers, bars and restaurants run their own show but have common business models and can therefore use the same "app of apps."

Besides savings restaurants from the costs of mobile development, app store approval, content management and IT infrastructure, these centralized apps could enable the entire industry to get richer data on consumers. Seeing the data from your restaurant is one thing; seeing someone’s 24/7 dining and drinking patterns is whole new level of big data.

In every industry, an app of apps seems to be replacing single-purpose applications. Hospitality will be no exception.

Finally, If it’s not clear already, these predictions are linked. The failure of EMV will fuel mobile payments, which in turn will nail the coffin on loyalty 1.0 and force hospitality brands to consider how they will support mobile commerce and loyalty—through branded apps or an "app of apps." These predictions matter because innovation and progress aren’t the same thing. Some hospitality brands will burn cash developing technologies that resist the trends and deliver no return on investment. Now that you know what’s on tap next season, your restaurant shouldn’t be one of them.