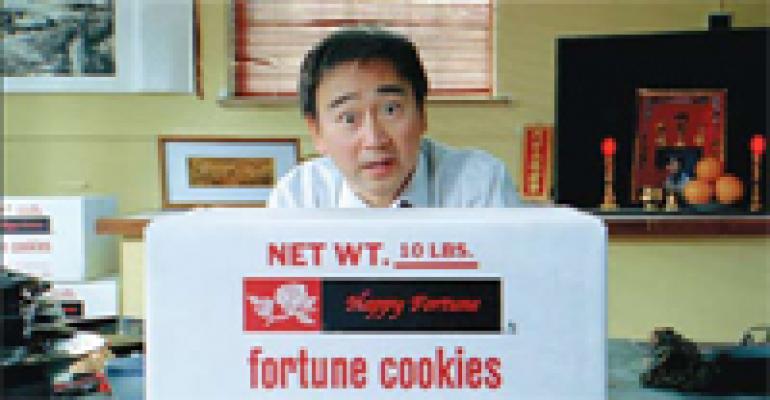 Memorable books result when a crackerjack writer/reporter meets a juicy topic. Which is what took place when Jennifer Lee wrote The Fortune Cookie Chronicles: Adventures in the World of Chinese Food (Grand Central Publishing; $24.99).

Lee is exactly the person you'd want to undertake this endeavor. She's a Harvard grad who speaks Mandarin and works as a metro reporter for the New York Times. We can't imagine where she got the money to travel across the country and globe to research her book, but we're glad she did. She hit three continents, 23 countries and 42 states. You rarely see this level of feet-on-the-street reporting anymore, especially by authors who hold down a full-time day job.

She tackles a subject — Chinese restaurants — we as readers have frequently experienced as customers. Yet we know next to nothing about their inner workings. Lee tells us plenty about how and why U.S.-style Chinese restaurants function they way they do.

And make no mistake, Chinese restaurants are a hidden world compared to the rest of the restaurant business. There are 41,000 Chinese restaurants, almost all independently owned. Yet they serve the same dishes — dishes that, incidentally, seem foreign to actual Chinese people.

One thing you'll be envious of is the labor situation in a typical Chinese restaurant. It's usually family members, augmented by native Chinese who have paid a fortune to leave their home country and emigrate to the U.S. The going rate: $70,000 — that's right, many Chinese pay that much to come here for low-paid restaurant work. So much for the rise of the middle class in China.

We also learn that it's easy to buy a Chinese restaurant — they change hands for three times monthly revenue — and easy to sell one, too. Just place an ad in Chinese Restaurant News and buyers will emerge. Lee also searches for the best Chinese restaurant in the world outside of China, finding it in Vancouver. “Zen Fine Chinese Cuisine was the only modern Chinese restaurant I visited where the patronage was overwhelmingly Chinese,” she writes. “That is an amazing feat, since most Chinese don't want their cuisine modernized.”

It was also affordable. “Zen's half-price special was a bargain: an eight course-gourmet meal with squab and half a lobster. Never forget that ‘bang for a buck’ is a hallmark of Chinese food around the world.”

Cheap and unchanging — exactly the formula that works in just about every Americanized Chinese restaurant.