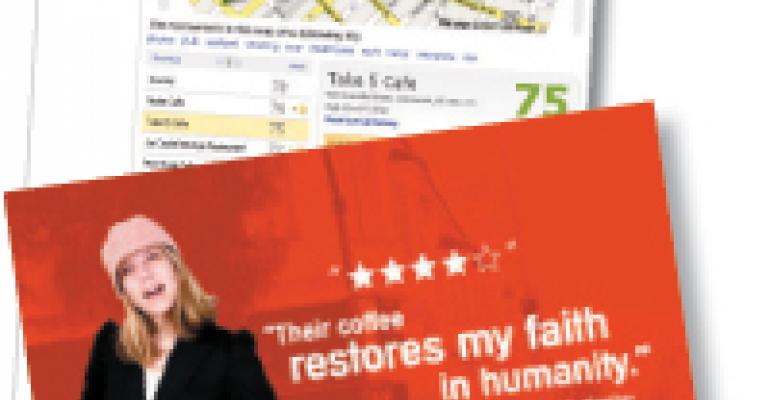 Wisdom of the Crowd

The phenomenon of crowd-sourcing isn't new to the restaurant rating business; the Zagat Survey has relied on this method for years to gather content for its guidebook business. But now a new wave of internet entrepreneurs has figured how to use crowd-sourcing to collect and disseminate user-generated opinions about restaurants, making a decent buck for themselves in the process. You may have never heard of outfits like Yelp and Eat-a-Rama, but they could soon become, or may already be, a powerful force in the success or failure of your business.

Operators may or may not be happy with their ratings and write-ups in Zagat, but at least the material there has been heavily edited to create a composite picture of each restaurant. Not so at Yelp or Eat-a-Rama, where all opinions are included — sometimes hundreds for a certain restaurant — and there's no editing whatsoever. The result is an unvarnished and never-ending torrent of opinion about a city's restaurants. Other websites that offer customer-generated opinions of restaurants tend to attract posts from those who have had an extremely good or extremely bad experience, creating a highly fragmented portrait of any establishment. Those who post at Yelp and Eat-a-Rama do so primarily to let their online circle of “friends” know how it was for them, creating, in theory, a more representative picture of the restaurant in question.

Yelp (www.yelp.com) got its start in San Francisco, and has moved into other big cities since. It's a localized review site and social networking site all rolled into one. The parent company makes money by selling ads to businesses that get a lot of favorable reviews.

For operators, Yelp is a godsend if posters love a place, potentially deadly if they don't. In the markets where it has caught on, it's a word-of-mouth generator like nothing the restaurant industry has ever seen. Right now, the Yelp website generates about 2 million hits per month.

That a lot, but standalone site Yelp might be out-paced by its rival, Eat-a-Rama. It resides on a site where a huge number of people already spend an inordinate amount of time each day: Facebook.

Eat-a-Rama bills itself as “a restaurant discovery application” and it's available for free on Facebook's open development platform (http://apps.facebook.com/eat-a-rama). Which means that it's tapping into a preexisting social networking platform which, in Facebook's case, has 63 million users and is adding new members at a rate of 250,000 per day. With this tool, some of them will now be able to talk about your restaurant.

The idea is that Eat-a-Rama helps people discover new restaurants based on the knowledge and opinions of their social network. For millions of teenagers and young adults, that network exists on Facebook. Restaurants are given two ratings, one from the entire Eat-a-Rama community, the other from a person's particular subset of “friends.” ActiveState Software, the Vancouver, BC, technology company behind this product, says it has already built a 250,000-restaurant database.

We don't yet know how big the impact of restaurant rating sites like Yelp and Eat-a-Rama, if any, will be. But we suggest you visit them to see how your place is doing. Even if you aren't getting high ratings and strong recommendations, the feedback you get from reading through a long string of customer comments will provide you with plenty of valuable information about how your restaurant is perceived by paying customers.