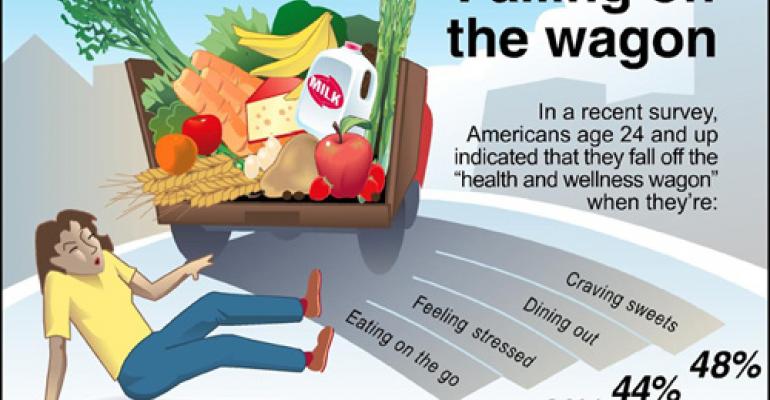 ASSESSING THEIR URGE TO SPLURGE

Puzder's done his job well, as profits at his company's 3,166 Carl's Jr., Hardee's and La Salsa Fresh Mexican Grill units rose 52 percent in the first quarter of this year. But so have the people whose job it is to tell your customers how to eat. Earlier this year, the U.S. Department of Agriculture (USDA) dumped the original Food Guide Pyramid-the triangular-shaped graphic that suggested how many servings of which food groups should be consumed in a day. With great fanfare, the USDA rolled out the replacement: MyPyramid.

If you look at it on paper, the two-dimensional graphic that depicts MyPyramid's nutritional strategy is sensationally confusing. But that's OK. MyPyramid is designed to be an interactive tool. The idea is that consumers will log on to www.mypyramid.gov to plan their eating and even their exercise activities for the day. The site's nifty MyPyramid Tracker tool lets consumers monitor their progress over time. Other customizable features make the site fast and easy to use for people who want to figure out what and how much to eat.

In all, it's a terrific use of the Internet's ability to disseminate customized information in a meaningfully interactive way to a large mass of people.

Operators could make use of MyPyramid.gov, too. It's a great tool to use when you're planning menu additions or pondering daily specials. With just a few keystrokes, you'd be able to tell potential customers exactly how and where your menu offerings fit in with the new USDA guidelines.

Of course, this all presumes your customers are eager to delegate highly personal eating and exercise decisions to anonymous bureaucrats who run the USDA's web site. The looming question here: Will enhanced availability of nutritional information translate to a larger market for healthful dining options in full service restaurants?

Three pieces of current information indicate the answer is no.

The first comes courtesy of a ZonePerfect Survey conducted by online polling specialist firm Harris Interactive. It found that, among Americans age 24 and older, 96 percent admit they fall off the "health and wellness wagon" in some way. Forty-eight percent said they did so when craving sweets, 44 percent did so when dining out in restaurants like yours, 41 percent do so when feeling stressed and 37 percent forego nutritional benchmarks when eating on the go. All of which is to say, a scant four percent of U.S. adults toe the line on healthful dining. Just about everyone else is an impulse buyer who will eagerly splurge on restaurant food.

Second, current market trends can't be denied. "The bottom line is that big sells," Technomic, Inc. head Ron Paul says. "It's not any more complicated than that.

You certainly can't argue with the success of Puzder/CKE's Monster Thickburger (107 fat grams), Burger King's Enormous Omelet Sandwich (739 calories and 47 grams of fat) or other mega-sized portions that have popped up on menus in all segments, save for fine-dining. They boost sales and raise the profiles of the chains that offer them. Sales at Hardee's rose seven percent after the Thickburger was introduced last winter. Burger King reports a 20 percent boost in breakfast sales since the Enormous Omelet Sandwich came on board in March.

In New York City, Beard Papa's Sweet's Cafes get $1.45 for its best seller, a cream puff with a whipped-cream-and custard filling. The company says some units there sell 5,000 creams puffs a day. The Japanese-based chain plans to add 20 U.S. stores this year. Its prime competitor so far is the Choux Factory, with two stores open in Manhattan and two more on the way. Its low-carb (remember low-carb?) cream puff goes for $2.50.

How healthful are cream puffs? Each one weighs in at 230 calories. That's 30 calories more than a Krispy Kreme glazed donut, even though a cream puff is baked, not fried.

Bon Appetit magazine has already declared that "cream puffs will be the next big thing."

"We all talk a good game, but less than two percent of us are actually eating what the Food Pyramid tells us to," the magazine's New York editor, Tanya Wenman Steel, told USA Today. Now we know why the obesity epidemic (the Centers for Disease Control estimates that 64 percent of American adults are overweight, 30 percent are obese) isn't going to go away overnight.

So what should you do now? Maybe you could be like McDonald's and play both ends against the middle. The chain continues to sell mostly burgers and fries, but makes a lot of noise about salad and fruit options it has recently added to its menu. More visibly, the chain has also made a drastic change in its marketing, aiming to convince patrons to adopt an active lifestyle. To underline its commitment, McDonald's has given the once-bulbous Ronald McDonald character a makeover. Formerly clownish-looking in a scary sort of way, Ronald has been recast at a hip young dude. Recent commercials depict a slimmed-down Ronald snowboarding down a mountain of yogurt while tossing vegetables and fruit with his action-sport-oriented buddies. Did they actually do focus groups that suggested this approach would bring in more business?

The bottom line here: If you think consumers are going to change lifelong eating patterns because the food police and McDonald's think it's a good idea, by all means make drastic changes to your operation. Otherwise, we'd suggest a wait-and-see approach to the obesity crisis debate.