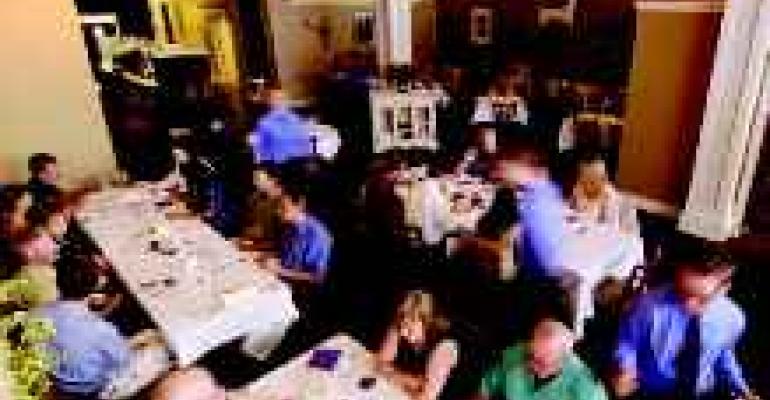 Wowing Them in Walla Walla

What chef hasn't had this dream: If only you could somehow open a place of your own, cooking the kind of food you love and serving it in a cool space in a charming town located smack dab in the middle of wine country. Look what it did for Thomas Keller, who put both himself and the town of Yountville on the map when he opened The French Laundry in California's Napa Valley. It shows what can happen if you make a bold move in just the right place at just the right time.

But if a right place and right time like this one somehow came along, would you really be able recognize it? And if you could, would you then have the guts to make your dream a reality? Mike Davis did, and just about everything that has happened since he opened his 110-seat 26 Brix in Walla Walla, WA this past summer has proven his instincts were right.

You may be asking: Walla Walla? Isn't that kind of...remote? And, also: Is there really "wine country" there?

Is there ever. Walla Walla is a little remote. This town of 28,000 (56,000 in the county) sits in the southeastern corner of Washington State, close to the Oregon border. More to the point, it lies in a fertile valley whose unique terroir provides near-perfect conditions for premium grape cultivation. The wine production boom here is still in its infancy, although vintages from the area's 54 wineries have already won awards and recognition worldwide.

So how is the food scene? Wide open. When Davis first visited the area in 2003, he couldn't believe how ripe conditions were for opening a world-class restaurant. Then happily employed as executive chef at the four-diamond Salish Lodge across the state near Seattle, he sized up the risk involved and decided he had to make his move. Fast.

"I was in panic mode thinking that other people would have the same idea I had," the 30-year-old chef recalls. "I knew I had to get going over here right away." Get going he did, moving to Walla Walla in August, 2003. The goal: create a world-class restaurant featuring four-and eight-course meals, an impressive a la carte menu, plenty of winemakers' dinners plus a 1,000-bottle wine list offering both international and Washington wines.

First he nailed down his new restaurant's location: the 1899 Dacres Hotel Building on W. Main Street, which has been listed on the National Register of Historic Places since 1974. After a $300,000 renovation that preserved its Italiante and Victorian character, the landmark building now houses the 5,000 sq.-ft 26 Brix.

Next came the staff. Think about it. If you aspire to creating a world-class restaurant, you need top-notch talent on your team. But would aspiring culinarians want to move to Walla Walla? Turns out they would, in droves.

"I'd never met the people who are now my chef de cuisine and my pastry chef," Davis recalls. "We did a national search through the Starchef web site. Within two hours, we had 67 resumes from all over the world." The result: Andrew Le Tourneau, who had been working in Chicago at Aubriot Restaurant, came to Walla Walla as Davis' chef de cuisine. Matthew Zack, who had been executive pastry chef at the Grand Hyatt in Seattle, joined, too. Walla Walla native Robert Ames ("the best palate in Walla Walla," Davis claims) signed up as wine director, as well.

Then Davis had to establish his supply lines. "Ingredients here are both a chef's nightmare and a chef's dream," Davis says. "Farmers are close by and people came out of the woodwork wanting to grow items for us. "The restaurant's local purveyor base provides artisan-level cheeses, apples, pears, sweet onions, asparagus and the like. Yet simple bulk produce like tomatoes has to be sourced from Spokane, the nearest supply hub. Seafood, meats and other fine ingredients come in by truck and plane. Davis says he learned to budget delivery fees into his food cost.

The doors to 26 Brix opened last June, at which point the real question came to the fore: No matter how good it was, could a place with the overhead of 26 Brix make a go of it in a town the size of Walla Walla? That part took a little work.

"We were very busy for the first two months, then slowed down in late August," Davis says. "I think we hyped ourselves too much, saying that we wanted to bring five-diamond dining to town. People were maybe a little bit intimidated." Davis' neoclassical cuisine also didn't come cheap. Appetizers range from $8 to $16, main courses go from $16 to $42. Deep-pocketed wine tourists filled the seats during a multitude of wine events; building a base of locals was a little harder.

To stir up more traffic, Davis started promoting inexpensive preset menus, like this past February's three courses for $26.26. "It was phenomenal," Davis says. "People came in for the $26.26 deal and discovered that the regular menu was not that expensive."

Right now, Davis' dream restaurant averages 50 covers per night during the week, 80 on a weekend night. Good numbers for the off-season. "In June or July we'll do 120-130 on a Friday or Saturday." And you can't get into the place during wine country special events. "Spring release weekend is in early May and we're already booked solid for that," he says.

Things have gone well enough that Davis hopes to lease another 1,000 square feet of space in the building. It will enable him to add more private dining and also create room for a retail wine shop.

Actually, Davis found more than his dream restaurant in Walla Walla. He also met his wife-to-be, Krista McCorkle, executive director of the Walla Walla Wine Alliance, a winery and grape grower partnership. They're set to be married this month. Even Davis didn't dare to dream that both his personal and professional life could work out so well in Walla Walla. But they did.