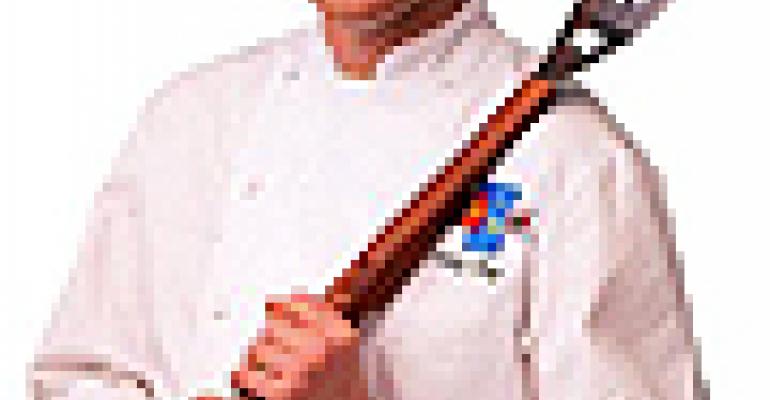 A TURN OF THE CARDS IN LAS VEGAS

The Caesars gig for Flay is just one more item for this multitasking chef's to-do list. He already operates two fine restaurants in New York City (the original Mesa Grill and Bolo) and has plans for a new American brasserie, Bar Americain, in the works. He hosts three-count 'em, three-shows on the Food Network (BBQ with Bobby Flay, Food Nation, Boy Meets Grill) and moonlights as resident chef of the "Early Show" on CBS. He's written five cookbooks and, as noted above, appears on "Iron Chef America."

It must make for a hectic schedule, but at least Flay can do all these jobs out of his home base in New York City. Being the executive chef at a 190-seat restaurant located 2,500 miles away in Nevada is going to be a challenge, even for an overachiever like this guy.

But it's a challenge of which at least one other Las Vegas hotel/casino has had enough. The mammoth new

Wynn Las Vegas project mandated that its name chefs move to Las Vegas and be there year-round. There was a lone exception: Daniel Boulud, who has been careful to point out that his Wynn restaurant is a brasserie, i.e., a step down from his high-profile Restaurant Daniel in New York City. The thinking goes that Boulud's absence won't diminish the experience.

So Boulud gets a pass. But everyone else on Wynn's list is going to be hands-on or else. The chef lineup includes the likes of Jimmy Sneed, Paul Bartolotta, Stephen Kalt, Eric Klein, Alex Stratta, Mark LoRusso and Takashi Yagihashi. Collectively, these guys might not be as high profile as some of the other casino/hotel culinary lineups. But they're close, with enough James Beard Award winners and Food & Wine Best New Chef nominees involved to ensure that the food is going to be innovative and top-notch. Plus, these chefs will be lending not just their names, but their talent full-time to their restaurants.

It's interesting to note that the reigning "Best New Restaurant of the Year," as designated by the James Beard Foundation, is Bradley Ogden, located, as is Flay, in Caesars Palace in Las Vegas. Unlike most celebrity chefs who open a place in Vegas, Ogden moved there to oversee his namesake operation. It's his home now, even though he remains a general partner in his Lark Creek Restaurant Group, which operates a number of fine restaurants in California. A rarity at the time, Ogden's move to Las Vegas now looks like the wave of the future.

Steve Wynn is considered by many as the first casino/hotel developer to pack his operation with high-end chef-driven restaurants, which he did while owning the Bellagio. He sold that property to MGM Mirage in 2000. He was right before, and he better be right now. Wynn has budgeted $248 million in first full-year revenues to come from food, beverages and banquets at his new mega-development. With the type of cooking talent he's got on hand, he just might make it.