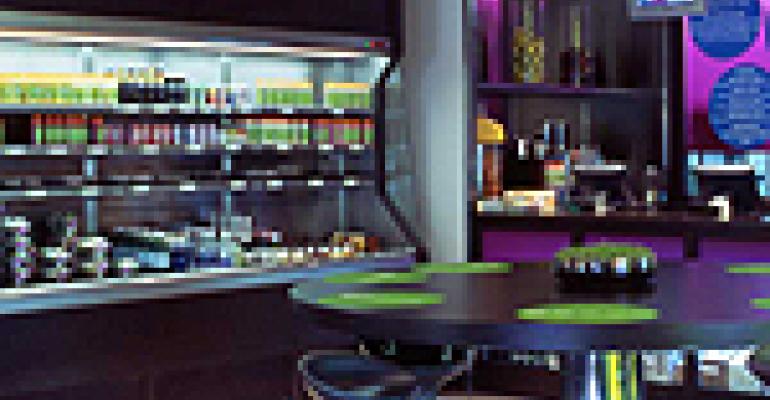 FAST CASUAL HITS THE WALL-BUT IN A GOOD WAY.

Industry watcher firm NPD Group's latest Fast Casual Report concludes that fast casual restaurants are still seeing solid increases in units, traffic and dollars, although some of these numbers have begun to soften. "For the year ending September 2004 vs. the same time a year earlier, traffic was up seven percent (it was six percent the year before). However, traffic for the combined group of chains was a bit soft on a per store basis," NPD notes. "Consumer spending was up ten percent for the same time period (vs. eight percent last year). Even though the growth rate has slowed over the last few years, it's still considerably higher than the total restaurant industry."

It better be, because a lot of people have been hoping fast casual can give their operation a shot in the arm. NPD says the fast casual segment is dominated by the bakery sandwich category, Mexican chains and burger chains, and recent developments in each indicate continued strong growth for some, although maybe not all, of the players.

In the Bakery Sandwich category, 700-store Panera Bread is looking to wring more money out of customers by having them stick around just a little bit longer. The company's strong move into offering Wi-Fi Internet access (added to 400 stores this year at a cost of $20,000 per store) is designed to keep its breakfast and lunch customers around after they've finished their meal. The hope is that they'll spring for an extra cup of coffee or a snack while they work online.

This is the same strategy Starbucks has successfully used to keep customers in its stores. Panera CFO Mark Hood said one-third of the company's sales now comes from what the company dubs its "chill-out" business-i.e., the time between major meals. Panera anticipates opening another 150-160 stores this year, Hood adds.

In the Mexican category, McDonald's is still on a building blitz with its Chipotle concept, having already expanded the burrito chain to 375 units in 20-plus states. And Jack in the Box is rapidly building out the Qdoba brand it acquired earlier this year. Qdoba is up to 180 units now.

The sailing has been less smooth at Wendy's, which said it will take a $195 million write-down to reposition its Baja Fresh Mexican Grill chain for growth, a move which will include the closing of at least 18 units.

"The store closings and market impairments are decisive initiatives to position Baja Fresh for stronger performance," Said Wendy's chairman/c.e.o. Jack Schuessler. "Baja Fresh has been successful in California and in East coast markets such as Washington, D.C., and Baltimore, but has had mixed results in other markets and declining overall comparable sales during 2004." The message here: fast casual Mexican food doesn't necessarily work for every company in every market.

We don't know if there's much of a demand for fresh Mex burritos in the European market, but the hamburger part of the business there is getting some high-level attention. Chefs with Michelin-starred backgrounds are finding their way to the segment.

Certainly the most notable player is Spanish chef Ferran Adria, considered by many, including most of his fellow chefs, to be the most imaginative chef not just now, but in history. Lately he's been imagining the menu for Fast Good, a fast casual restaurant located inside the NH Eurobuilding hotel in Madrid.

The place offers fast food made with gourmet ingredients. There are plenty of choices on the menu, but Adria's take on a basic hamburger is the big seller. It's made with Spanish beef variously garnished with trocadero lettuce, tapenade sauce, or with arugula and Gorgonzola. The average check is 15 euros, or around $20 U.S., which certainly helps makes the case for having a three-Michelin-star chef as the front man for a fast casual concept.

Adria likes the potential of the fast casual segment. "We have come up with the idea of Fast Good after analyzing the markets in different countries around the world," he says. "Business customers do not have a lot of time for eating but are increasingly interested in living well and quality eating. This is why we think that this new idea will be a success." He intends to open other Fast Good units elsewhere in Europe and in Latin America.

French chef Olivier Pichot has plenty of Michelin stars in his background, to, working at La Tour d'Argent, Le Trianon and others. But he doesn't have to worry about building out a concept, because he's now the head chef and "creator of flavors" for McDonald's in France. Pichot's job is to make McDonald's more palatable to a customer base that views a meal from McDonald's as malbouffe (i.e., bad grub).

"McDonalds said to me: 'Help us find a new solution. Helps us to expand what we have on offer. Help us to diversify people's tastes. Helps us to educate children because if children don't eat vegetables at home it's because they haven't been taught,'" Pichot says.

Hmmm. We're guessing that not many French citizens are going to look to McDonald's to reinforce the gastronomic birthright that is ingrained in French culture, especially where their children are involved. But word is that Pichot's salads served with warm chicken-the Salad Plus offerings-are going over well.

Pichot thinks he can pull it off "We are culinary agitators," he says. "We want to change the world of food. My dream is to be able to develop the range of what is on offer, bring in new know-how and creative diversity.

"We have to use the chance to create more choice," he adds. In other words, Pichot understands what the fast casual segment is all about. Customers embrace these concepts because they offer more choices than traditional fast food restaurants, but in large part retain the speed of service and price points so prevalent in QSR. No wonder the growth prospects for this segment are still being described in big numbers by the NPD Group.