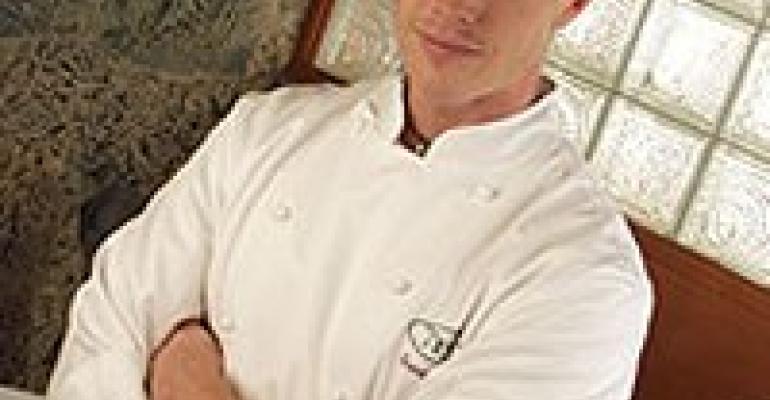 PRESENT AT THE CREATION

To see for yourself, just go the opening page of www.egullet.com and click on the Alinea Project folder. There you'll find several threads to follow, including lengthy discussions about the new operation's business plan, its culinary creations, its kitchen design, its equipment choices and its specialized serving devices. Each thread offers plenty of food for thought for any full service operator. (There's also an excruciatingly long thread about the crafting of Alinea's identity, whose primary lesson may be to not spend as much time and energy as these guys did when picking out a logo.)

The 30-year-old Achatz gave up his high-profile post as chef at Trio in Evanston early in 2004 to set out on his own. The result will be Alinea, scheduled to open in early 2005 in the same slightly-out-of-downtown neighborhood as Charlie Trotter's.

Achatz is shooting for the moon at this place, which in part is why giving the world such an up-close-and-personal look at the restaurant's development process was important. The word-of-mouth buzz about Alinea has already reached historic proportions within the foodie community, even though the restaurant itself does not yet exist. As no-cost marketing strategies go, this one can't be beat.

The goal for egullet.com's Alinea Project is equally lofty. It's "intended to provide a rare and uniquely interactive view of the behind-the-scenes elements of opening a restaurant-a restaurant which will push the very definition of what a restaurant is." Achatz began posting to egullet.com this past August, and it's clear from the questions asked by other forum participants (and generously answered by Achatz) that food creation and business plan development are what interests this web site's participants the most.

One unusual aspect of Alinea's development schedule was that the French Laundry-trained Achatz had a test kitchen and kitchen staff in place six months before his scheduled opening. He's a creative guy, and he had plenty of time to think about what he wanted to do at his new place.

Take, for example, his plans for the amuse course.

"As I said up-post, that amuse slot is an important one," he writes. "The guest's first bite should, in my opinion, do more than just taste good. For us it becomes a way to disarm the diner. Yes, the food is highly manipulated, yes, it is aesthetically different than most that you have had, yes, it tastes good, but it is also familiar and it is OK if it makes fun of itself. If we can successfully place a dish in front of the guest that is visually unfamiliar yet tastes of one of the most comforting flavors known...we have successfully set the tone for the rest of the evening." Indeed.

Given that intro, Achatz then walks readers through many of the dishes he's been working on, complete with photos. It's an insider's look at the creative process you just can't get anywhere else.

For the business plan, Achatz's partner Nick Kokanas wouldn't spill the beans on dollar amounts, but does give out many key details, including how and when the completed plan was presented to potential investors.

"Utlimately, we arrived at a point where we felt confident that we had gathered all of the 'build-out' information we could. There were many unknowns and many estimates, but all were based on realistic goals and researched information. This was then presented as a business plan.

"The plan consisted of approximately 10 spreadsheets, one long written piece detailing the vision of the restaurant and a timeline and description of methods of executing the plan. This being Grant and a high-end restaurant, we packaged the plan in a beautiful box on hand-made paper, along with a digital copy of the plan, a press kit, etc., And, of course, a miniature four-course tasting menu in small vials consisting of a dry martini, lamb and desserts!" No wonder they got the money.

Even though Alinea intends to operate in the culinary stratosphere, its development process will likely be of high interest, both personal and professional, to many RH enewsletter readers. Go to egullet.com and feel free to ask a question of the chef and his team. They'll give you some priceless answers, for free.