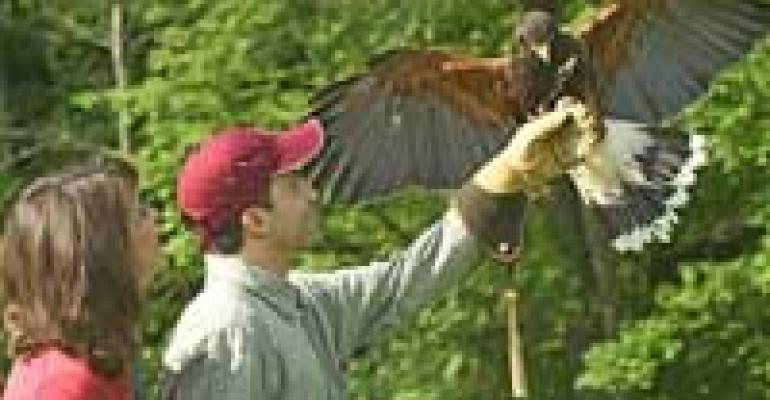 Flying In The Face Of Convention

Located in White Sulphur Springs, WV, the 721-room Greenbrier has played host to notable guests from around the world since 1778—and yes, you’re reading that date correctly. It’s luxury class all the way, with a guest list that revolves around captains of industry, masters of the universe from Wall Street, and the people who inhabit the very top strata of wealth—the one where you no longer work for money, you just have it.

On the food front, it’s been the kind of place where the back of the house employed a huge brigade de cuisine, the front of the house was manned by tuxedo-clad professional waiters, and guests dressed up—way up—for dinner. The Greenbrier is owned by the CSX Hotels, Inc., a unit of railroad giant CSX Corp.

The ownership was none too pleased when, in 2000, the Mobil Travel Guide removed a star from what had for decades been a five-star property.Guide editors felt The Greenbrier had begun to show its age, and lacked a certain mojo for all but the older crowd. What’s the big deal with one star one way or another? At this level of the resort business, even a tiny demotion is the kiss of death. One day you’re one of the very best resorts in the world, the next day...you’re not.

The Greenbrier’s contribution to its corporate parent’s bottom line accounts for only a tiny part of CSX’s overall revenue, but the owners bristled when the place began to lose money. The food had consistently been excellent—this is where Walter Scheib cooked before heading to the White House—but was skewed toward the needs and expectations of a senior-citizen-heavy clientèle.

The solution: A major upgrade in 2006 to the 6,500-acre property, courtesy of a $50 million renovation project. Most of it went to the revamping of hotel rooms and public spaces, but a new attitude about what type of guests to go after and how they should be fed was also part of the deal.

“All of us here at the Greenbrier and CSX are committed to the three goals of repositioning the resort for the next generation of luxury traveler, regaining the fifth star from Mobil and returning the resort to profitability,” is how Greenbrier manager of public relations Lynn Swann sums up the effort.

The Greenbrier brought in chef de cuisine Michael Voltaggio to kick-start the culinary upgrade. The 28-year-old had been chef de cuisine at the Charlie Palmer-owned Dry Creek Kitchen in Healdsburg, CA, but now he’s running the show at Hemisphere, the resort’s new globally inspired kitchen. “Hemisphere will be our entree into the world of fine dining, but really the world of wonderful food pairings, tasting menus, wonderful wines and very, very different plate presentations,” is how the Greenbrier described its new restaurant going in. “It will not be your standard Greenbrier menu offerings.”

Indeed. Voltaggio, who had been chef de cuisine at the Ritz-Carlton in Naples, FL and put in a stint at The French Laundry before signing on at Dry Creek Kitchen, can hold his own with any of the world’s techno-chefs when it comes to performing wizardry with food.

There’s no a la carte ordering at Hemisphere. Guests choose either a $95 per person five-course vegetarian tasting menu, a $115 five-course non-vegetarian menu, or a $135 seven-course grand tasting menu that’s $180 when paired with wine. “This is a little more contemporary, something you’d see in the major culinary cities in America,” is how assistant food and beverage manager Kevin Dott described the Hemisphere experience for CNN. “Finding it here is a bit of a surprise to our guests.”

Voltaggio’s job is to make cutting-edge food accessible for The Greenbrier’s gilt-edged clientèle. “It’s not so far out there that we want people to be intimidated by it,” he told the AP. “We are in West Virginia, we are in a big, old hotel and we are still serving dinner.”

A recent seven-course tasting menu starts with a selection of canapes and ends with an assortment of mignardise, while the courses in between go like this:

It’s quite a challenge to pump out this much sophisticated food for an 80-seat restaurant, but Voltaggio and his crew are up to the task. Guests who prefer the previous approach can still head for the Main Dining Room, where more traditional offerings (Composition of Chilled Shrimp as a first course; Cream of Five Onion Soup as a second; Sauteed Supreme of Duck or Dover Sole as the main) are done with first-class attention to detail. At dinner, male patrons must still wear a jacket and tie in this venue, and “dresses or evening suits” are mandatory for women. Hemisphere requires a jacket, but no tie, for its male guests, with no listed suggestions for women.

We’ll find out soon if Hemisphere will help attract serious foodies, preferably younger ones, to The Greenbrier. If it does, you can expect other luxury resorts to ditch the their old school approach to dining options and go with something much more contemporary instead. And it won’t be long until we find out whether the inspectors at the Mobil Travel Guide think the addition of an edgy food option plus the other recent changes are enough to elevate The Greenbrier back to the five-star level. If so, the talented young chefs who can produce this kind of fare are going to be in even-greater demand than they already are.