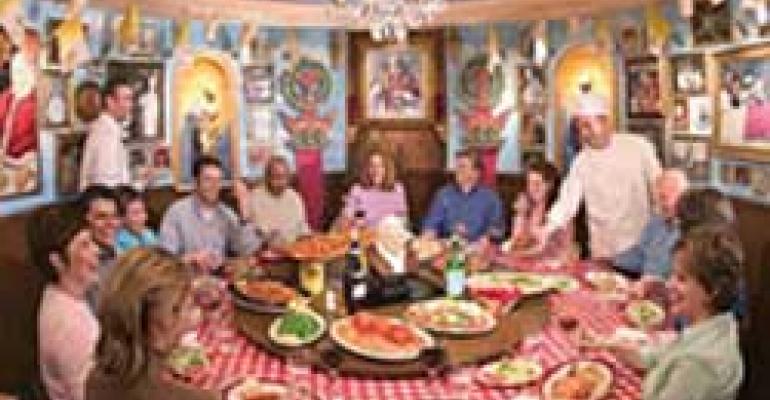 BUCA: IT TAKES A LICKING AND KEEPS ON TICKING

Buca di Beppo had a great run starting in the late 1990s and continuing into the post-9/11 era, when its combination of “immigrant Southern Italian” cooking, over-the-top portion sizes and wacky interiors made it one of the fastest-growing full-service chains in the industry. It was hugely popular with large groups, in part because its ordering scheme—platter-sized portions only, the better to ensure that food would be passed from customer to customer—was novel. The food was good, and a chef’s table in each unit’s kitchen underlined the fact that everything was prepared from scratch.

It all added up to a memorable experience. It was fun to eat at Buca, the pricing on a per-person basis was relatively modest and no one went home hungry—in fact, most were packing a pound of two of leftovers when they walked out the door. Few chains ever generate the degree of buzz Buca di Beppo did. First-time visitors always came away with plenty to talk about—something that you wouldn’t say about Olive Garden, for example. In particular, Buca’s Pope’s Table became a minor legend and was the hardest reservation to get in the full-service chain restaurant industry.

On the business side, founders Phil Roberts and Joe Micatrotto took a measured approach to expansion, and Buca’s initial public offering in 1999 drew a warm reception from Wall Street. No wonder; the pair had done a lot of things right. Buca was careful to not saturate markets, to not expand faster than it could generate competent “paisano partners” to run its new units and was scrupulous about not diluting the experience at existing units as the concept expanded. Other pluses: All the stores were company owned, and the Buca concept was proven to work anywhere from renovated buildings in big city downtowns to standalone new construction in the suburbs.

In short, Buca (the corporate entity eventually shortened its name to Buca, Inc.) avoided most of the sins that typically befall casual restaurant chains. At its high-water mark, it operated 104 restaurants under the Buca di Beppo and Vinny T’s of Boston nameplates, covering 30 states. It’s hard to pinpoint the exact time that Buca began to stumble, but legal troubles may have contributed to its lack of focus over the past several years.

We’ll spare you the blow-by-blow of who did what when at Buca. Instead, we’ll skip ahead to how the U.S. Attorney for Minnesota summed it up in a statement on Feb. 28, 2007:
“Former executives of Buca Inc., the Minneapolis-based chain of Italian restaurants, have been ordered to serve time in federal prison for misappropriating more than $200,000 in corporate funds and submitting false financial statements to the U.S. Securities and Exchange Commission. United States District Court Judge Donovan W. Frank sentenced Joseph P. Micatrotto, age 54, of Las Vegas, NV, Greg A. Gadel, age 47, of Eden Prairie, and John J. Motschenbacher, age 43 of Chanhassen.”

Micatrotto, once CEO and board chairman of Buca, was sentenced to 13 months in prison and three years of supervised release. He was fined $250,000 and ordered to pay $65,000 in restitution to BUCA.

Gadel, formerly the company’s chief financial officer and executive vice president, got 12 months and one day in federal prison and a $50,000 fine and must return $76,180 in restitution. Motschenbacher, the ex-chief information officer, received a $25,000 fine and was ordered to pay back $145,000 to Buca. He avoided prison via a work release deal complete with an electronic monitoring device.

All three had previously pleaded guilty to mail fraud violations. If you ever wondered what all those Sarbanes-Oxley reporting requirements are about, they help uncover incidents like these.

It didn’t do much for the company’s momentum when its leaders were being investigated by the Federal Bureau of Investigation and the U.S. Postal Inspection Service. No wonder the brand languished.

The silver lining was that some of the people brought on board to keep the ship from going down were already hall-of-fame types in the restaurant management world.

Wallace Doolin assumed Micatrotto’s old posts as chairman/ceo. Doolin worked his way up through Applebee’s (he was president), Flakey Jake’s Steak & Ale to become head of T.G.I. Friday’s, where he took that brand international. Later, he became president and c.e.o. of Friday’s parent Carlson Restaurants Worldwide. He had long been acknowledged as one of the restaurant industry’s most thoughtful leaders.

Feltenstein, who now sits on Buca’s board, knows how to light a fire under a chain restaurant brand, too. He was chief marketing officer for Dunkin’ Donuts, then became executive vice president of marketing for Burger King. His next move was to form an investment group, Yorkshire Capital Group, that bought, first, A&W restaurants, then Long John Silver’s. He sold the whole works to Yum! Brands in 2002. He next became chairman of Sagittarius Brands, parent company of Captain D’s Seafood and Del Taco.

It’s a good thing these guys two are on board, because Buca could use the help. The company’s last conference call stated that comparable same-store sales for the first half of 2007 were up 3.7 percent, albeit many units added lunch service during that time and menu prices rose two percent in the period. As a percentage of sales, food costs dropped slightly during the period (to 24.6 percent from 24.8 percent in the previous year). But overall, Buca lost $6 million in the first half of fiscal 2007. The company’s cash position seems moderately perilous, with Buca failing to meet certain covenants of its credit revolver regarding EBITDA. Still, the company is planning on opening new units in 2008, and estimates the total cash outlay per new Buca di Beppo, including pre-opening costs, will be approximately $2.5 to $3.0 million.

Which brings us back to that $2 per share price. The company is cash-shy, but is otherwise stable. And you can’t beat the leadership people like Doolin and Feltenstein bring to this concept. Should you invest? We point out that Buca’s market cap ($2.50 per share times 21.2 million shares outstanding) is in the $53 million range—or one-fifth of its annual sales. Doesn’t it seem like there might be some upside here?

Especially now that Buca di Beppo is joining the rest of the restaurant world in letting each customer order what they want. Yes, long-time fans can still order those mammoth platters of food known as “Buca large” and let each member of their party fend for themselves when the food arrives at the table. And yes, there’s still the due, i.e., “Buca small,” with roughly two portions of food.

But now Buca’s offering mio portions, single-serving sizes, which should help the company in several ways. For one, it will attract people who like to eat at Buca who prefer to order for themselves, rather than being stuck with the food choices proclaimed by the most assertive member of the group. And two, the margins on the mio size meals are favorable to Buca. For example, a cheese manicotti entree costs $9.99 for the mio, $14.99 for the due and $27.99 for the full platter. Food costs here are good across the board, but the lowest percentage has to be the mio size. Other mio menu items are similarly priced.

So, strong concept, great leadership, logical strategy—we’re thinking it’s going to turn out OK for Buca. We’re not investment advisors, but this one might be worth a flyer.