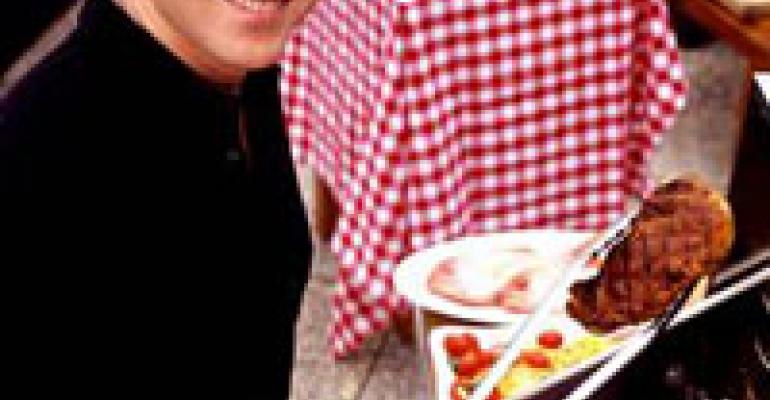 Business bible Forbes produces its celebrity rankings annually, and aspirants have to do more than make a lot of money to be included. Entertainment-related income matters, to be sure. But Forbes researchers combine it with more imaginative metrics including Web mentions on Google, press clips compiled by Lexis/Nexis, TV/radio mentions flagged by Factiva and the number of times a celebrity’s image appeared on the cover of 32 major consumer magazines. It’s hard to say exactly of what the oft-used phrase “media buzz” consists, but this method comes closer to defining it than anything else we’ve seen.

Forbes bills the list as “The Hottest Movie Stars, Musicians and Athletes,” which it is. But five people who primarily cook for a living made the list as well. A decade ago, no one would have even thought to consider chefs as part of the celebrity universe, but they’ve become fixtures in it now. Here’s this year’s crop, which we present from lowest-ranked to highest.

Coming in at “Power Rank” No. 100 is Bobby Flay, who made the least money of anyone included on the list—$2 million. But don’t feel too sorry for the guy. He appears on four Food Network shows and has restaurants in New York (Mesa Grill, Bolo and Bar Americain), Las Vegas (Mesa Grill at Caesars Palace), The Bahamas (Mesa Grill at the Atlantis Paradise Island, Nassau) and Bobby Flay Steak at the Borgata in Atlantic City, NJ. His fellow chef/restaurateurs will note that he has kept Mesa Grill going strong in New York City since 1991, a remarkably long run for a chef-driven operation. As his frequent battles on “Iron Chef” demonstrate, he can cook , and cook well, just about anything you throw at him. His earnings tied him for 99thwith child star Hayden Panettiere from the NBC show “Heroes.”

Number 99 is Paula Deen, omnipresent on the Food Network of late but also the owner of The Lady & Sons Restaurant in Savannah, GA. Her earnings—$4 million—tied her with kid star Dakota Fanning. Look for Deen’s earning to take off if her lifestyle magazine, Cooking with Paula Deen, becomes successful.

Wolfgang Puck, a fixture on this list for years, comes in at Number 88 in 2007. His income is high ($13 million), but his lack of a TV cooking show cuts into his standing on some of the other metrics Forbes uses. His catering business and a string of restaurants bring in plenty of revenue, and his line of supermarket products are steady earners. While he doesn’t have a cooking show, no one can touch Puck when it comes to selling food-related merchandise on television, witness his pot-and-pan selling marathons on HSN. Through it all, his signature restaurant, Spago, remains one of the hottest spots in Los Angeles, and his take on the steakhouse genre, Cut, racked up a slew of national awards when it debuted last year. Puck earns about as much as “American Idol” host Ryan Seacrest.

Forbesranked Emeril Lagasse one slot ahead of Puck, at Number 88. Lagasse’s still a big star on the Food Network, but this summer saw his “Emeril Live” prime-time show moved into a slightly different, and non-prime-time, slot: 7 p.m., instead of 8 p.m. On the restaurant front, he opened his 10thoperation, Emeril’s Gulf Coast Fish House this year. It’s located in Gulfport, MS, at the Island View Casino Resort, about one hour east of New Orleans. His greatest restaurant feat of late may be getting all three of his New Orleans-proper restaurants—Emeril’s New Orleans, Emeril’s Delmonico and NOLA, back on their feet in the post-Katrina era. Perhaps taking a cue from Puck, Emeril last month made his debut on the Home Shopping Network, hawking his extensive line of “Emerilware” – a professional line of cookware, appliances, cutlery and kitchen accessories. He takes in about as much as actress-singer Hilary Duff.

Grand champion of the chef category, or perhaps we should say the food TV division, is Rachel Ray, Number 66 on Forbes list. Forget her Food Network work. It’s her syndicated TV talk show and personal lifestyle magazine that’s bringing in the bucks—$16 million last year. Is this a lot of money for a celebrity? According to Forbes, it’s as much as the entire cast of “Desperate Housewives” makes collectively, and it’s how much “The View” star and owner Barbara Walters makes. Behold the power of food.

So what’s the message to the kids working in your kitchen? In the food business right now, just about anyone can be a star, and you don’t have to be born into a family with good connections, get into the right schools or be blessed with sensationally good looks or a terrific voice to become one. Not only are the barriers to foodservice industry stardom few. By the standards of most industries, they are nonexistent.

Consider the backgrounds of the current crop cited by Forbes. Bobby Flay? He dropped out of high school at 14. Paula Deen had such a bad case of the anxiety disorder agoraphobia that she had to give up her job as a bank clerk and become a stay-at-home mom. She never tried the food world until she was in her 40s. Emeril got his start working in a Portuguese bakery in Fall River, MA. At one point on his trip from humble beginnings in Austria to stardom in Los Angeles, Wolfgang Puck spent time cooking at the Indiana National Bank in Indianapolis. Rachel Ray once worked the candy counter at Macy’s in New York City and was doing store demos at the Cowan & Lobel store in Albany, NY, when she got her break on TV. Only two of the five, Flay and Lagasse, went to culinary school.

So if your young staffers want to get rich and famous, show them the list from Forbes. It’s good news for them; they’re already in an industry where it’s possible to do so without being a movie star, musician or athlete.