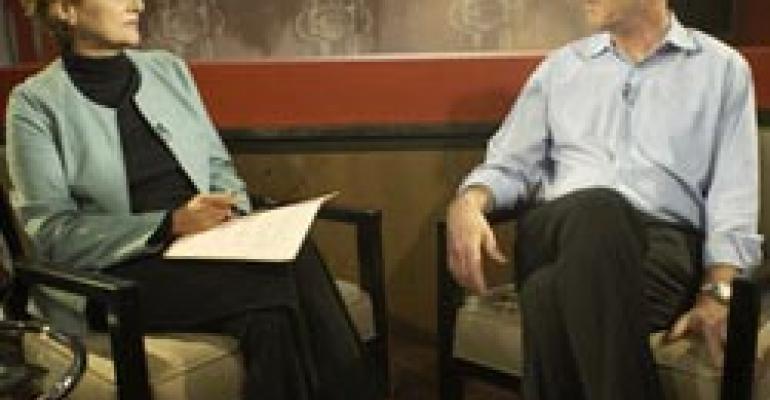 It’s tough to get a handle on how well Chef’s Story’sratings compare to those of its reality show competitors. As a PBS show, it runs at different times on different days in different market, with some PBS affiliates not having broadcast it yet. But it should pull good numbers from the current crop of newly minted cooks you employ and from those now contemplating joining the culinary profession. Why? Acting aside, what other profession can supply up-and-comers with 26 weekly doses (Dean Fearing and Robert Del Grande appear jointly in one episode, making for 27 chefs) of how-I-did-it inspiration provided by bona fide industry stars and have it be entertaining? The series makes the life of a chef seem even more fun and glamorous than outsiders already imagine it to be. And the life stories of the chef/participants make it clear almost any barrier to success in the restaurant world can, for the hard-working and talented, be overcome.

Chef’s Story is the brainchild of Dorothy Cann Hamilton, founder and c.e.o. Of New York City’s French Culinary Institute (FCI). Each 30-minute episode features Hamilton posing interview questions meant to draw out the details of how each chef made it to to the top. There’s also a Q&A session with the audience, which is composed of FCI students (all of them wearing chef’s whites), plus a cooking demo performed by the chef/guest. Most episodes took an hour or more to tape, and were then edited down to fit into the 30-minute format. All 26 shows were taped in a three-week span earlier this year at the International Culinary Theater, located inside the FCI.

In addition to heading the FCI, Hamilton is chairman of the board of directors for the James Beard Foundation. That leverage helped her land many of the industry’s true stars for Chef’s Story, including such media-shy types as Thomas Keller, Jean-Georges Vongerichten, Patrick O’Connell, Charlie Palmer and Andre Soltner. The highest-profile names not on board for this round of the show include Wolfgang Puck, Emeril Lagasse and Mario Batali. Only three female chefs appear in the series: Lidia Bastianich, Cat Cora and Suzanne Goin.

The series’ content has been given the full multi-media treatment, and many of the extra offerings make the most of the material edited out of the half-hour PBS show. There’s a hardcover book (A Chef’s Story: 27 Chefs Talk About What Got Them Into the Kitchen; Ecco, $27.95); a downloadable e-book with the same material ($19.95); and DVDs priced at $19.95 per episode. Also, reams of bonus content will be posted on the FCI website, (www.frenchculinary.com), and podcasts and cellphone downloads are in the works. We say that when you can get people to use cellphones to watch Andre Soltner talk about omelets, the media has gone about as far as it can go in giving exposure to the culinary profession.

We tip our hats to Hamilton for her work in giving this new level of visibility to chefs. That’s good to see from the current chair of the James Beard Foundation, especially in light of the June 13 death of Len Pickell, who had been president of the Beard Foundation until January 2005. That’s when he pleaded guilty to stealing $1.1 million from it. He was sentenced to one to three years in prison on his second-degree larceny charge and was released in August, 2006.

An autopsy showed that Pickell died of embolisms in both lungs. His family is suing, claiming that inadequate care in prison caused his embolism condition to significantly worsen. It was a sad ending for Pickell, who is survived by a wife and two daughters. He was only 53.

The Beard Foundation has rebounded from this incident and now, under the leadership of board chair Hamilton and president Susan Ungaro, is stronger than ever. Interested readers can go to www.jamesbeard.org/about/financials.shtml to view its latest audited financial statement, as well as those from previous years. It speaks to the strength of the organization that it was able to continue operating despite the significant financial dilemma it found itself in just a couple of years ago. We don’t know how well Hamilton’s multimedia approach to Chef’s Story will turn out financially, but her stewardship of the Beard Foundation is truly admirable.