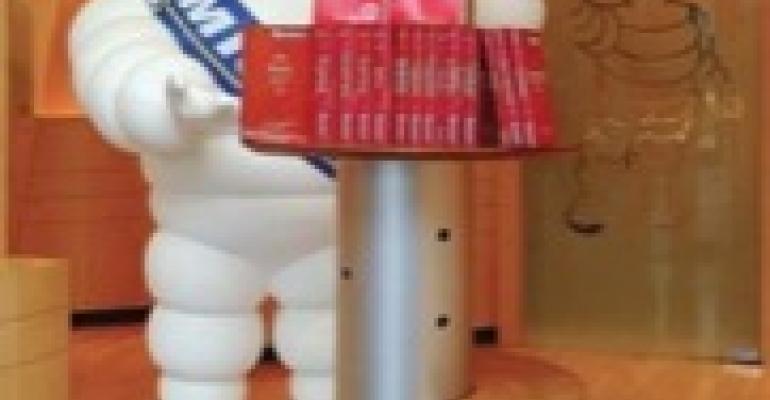 Operators in Los Angeles and Las Vegas, get ready. Michelin has announced that it will issue the inaugural editions of its restaurant ranking guides for these two U.S. cities later this year. The French company—the official name of the tire-maker's publishing unit is Michelin Maps & Guides— announced the move in late March, well after its teams of inspectors had begun to sample the culinary wares of both cities.

"The inspectors have enjoyed getting a taste for these exciting, dynamic cities and discovering the restaurants that bring character and flavor to the region," says Christian Delhaye, president of Michelin Maps and Guides. "In Los Angeles, these restaurants are found throughout the metro area, in the most popular parts of the city to off-the-beatenpath neighborhoods. In Las Vegas, however—as you might expect—the top restaurants are concentrated in a small geographic area."

This new push follows Michelin's moves into New York City in 2006 and San Francisco in 2007. While the company long ago established itself as the de facto arbiter of culinary greatness in Europe, the jury is still out on its impact in the U.S. However, a one-, two- or three-star ranking in a Michelin Guide will likely bring plenty of incremental prestige and patronage to any restaurant that earns one.

But is it realistic to apply Michelin standards to U.S. restaurants? Some restaurateurs in L.A., where even the top places are somewhat casual, have their doubts.

"Look, the great temples of ecstasy are becoming rarer and rarer," Valentino owner Piero Selvaggio told the L.A. Times. "Even in Europe, they are the ones who are having a hard time doing business. Here in Los Angeles, we a have a perfect example of how restaurants will be in the future."

"For us," counters Delhaye, "the stars are for the quality of the gastronomy in the place. The fact that the customers are coming in jeans, that's not a problem."

The Michelin Guide ranking process involves multiple test meals consumed by full-time paid inspectors during anonymous visits to a restaurant. This differs from the method employed by the Zagat Survey, Michelin's restaurant ranking rival. Zagat relies on ratings sent in voluntarily by an unpaid, self-selected group of patrons, whose rating sheets are then compiled and edited down by Zagat staffers.

It was originally thought that Michelin's old-school paid-inspector approach wouldn't wash in the U.S., where Zagat's more democratic method had a strong hold. However a recent article in Smart Money magazine raises serious questions about just how many people actually submit votes for some of the restaurants Zagat ranks.

Also unknown are the demographics of the vote submitters. There are 60 million blogs and thousands of food- and restaurant-related websites available to anyone who wants to express an opinion about a restaurant. That's how many patrons, particularly younger ones, make their opinions known today. How many also send their thoughts off to Zagat later is something we'd like to know.

For more on the Zagat story, check out the 4/15/07 newsletter at www.restaurant-hospitality.com