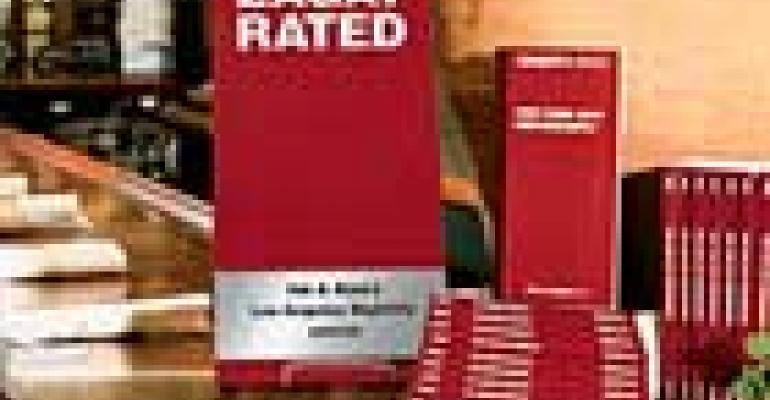 WHERE ALL THE RESTAURANTS ARE ABOVE AVERAGE

An article in the March 2007 issue of Smart Money, the personal finance magazine published by the Wall Street Journal, examines several aspects of the ever-expanding Zagat Guide universe. While bowing respectfully to the company’s lucrative business model (content is basically free—opinionated restaurant enthusiasts contribute it gratis—and freelance editors compile it for $20 per review), the article points out that restaurant scores have risen significantly over the years. For example, only 25 percent of New York City restaurants earned a food score of 20 or higher in 1983; 70 percent do today.

Smart Money uses that data as a springboard to examine the secretive nature of Zagat’s data-gathering practices, uncovering plenty of information that will be of interest, if not concern, to full-service operators. (You can access the full article at www.smartmoney.com/mag/index.cfm?story=march2007-zagat). Even so, who would deny that the long-term impact of the Zagat Guide on the restaurant industry has been hugely positive? Possessing a solid Zagat rating is a plus for an operator, and even getting into the book at all and acquiring a “Zagat-rated” sticker for your door or window is a sure-fire business booster.

Those door stickers are free, but Smart Money raises its eyebrows at the recent practice in which Zagat now peddles plaques to listed restaurants (at $149 and up; you can spring for the $199 model if your food score is 24 or above). We were more concerned with the breakdown of how many people may actually be voting on any individual city’s restaurants, let alone any particular restaurant in that city. Tim Zagat broke off his interview with the Smart Money reporter when this subject was broached, so we can’t tell you his thoughts on the matter.

But we can wonder if the rise of online media is causing Zagat’s universe of self-appointed restaurant reviewers to (1) shrink and (2) age.

When the Zagat Survey first began, opinionated foodies had no other outlet but Zagat to register their opinion, and it remained that way until roughly the late 1990s. That’s when thousands of food- and restaurant-related websites, discussion boards, forums and like media began to emerge, followed closely by the explosion of blogs. If you have an opinion on a restaurant today, participating in a Zagat Survey is probably the slowest, least-effective way to get it into the public domain. And if you have cleverly written opinions on restaurants, you’re much more likely to make a business out of publishing them yourself, rather than to sending them off to be used without attribution—and after heavy editing—by Zagat. In particular, those in the Gen X and younger demographics increasingly see the world this way.

Thus we find ourselves primarily wondering not about how many people actually vote on any particular restaurant in any particular city in any particular Zagat Guide (although we’re wondering about that, too). Instead, we’re more concerned about the age of the people doing the voting, and the relevance of their opinions to the current restaurant scene. We’d feel better about the Zagat methodology if they’d tell us if or how the demographic breakdown of voters has changed over the years.

But at least we’re no longer wondering why the Michelin Guide decided to invade America. Already publishing editions in New York City and San Francisco, Michelin has announced plans to expand into Los Angeles and Las Vegas in 2008. Concerns about the Zagat methodology suddenly makes Michelin’s “our inspectors are the experts” approach seem newly viable to us.