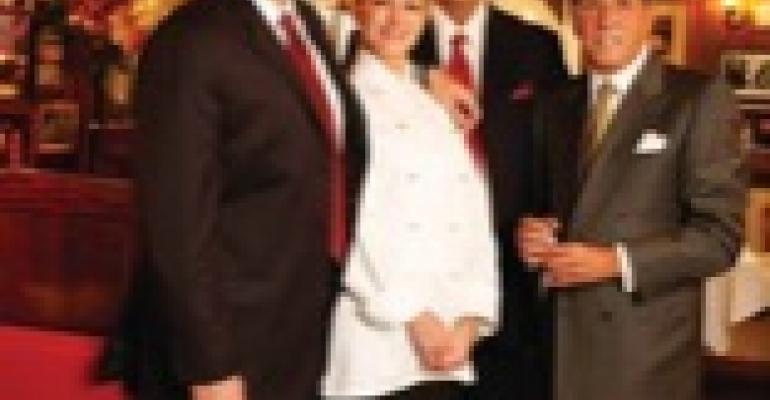 No Celebrity Left Behind

It's a huge risk for a family who runs a legendary 10-table Italian restaurant in New York City to attempt a very large-scale reproduction of it in a Las Vegas casino-hotel. Which is why it's worth watching to see how the new Rao's Caesars venture works out. The 10,000-sq.-ft. restaurant opened last December, aiming to somehow duplicate the intimate vibe that has for decades made the original Rao's on East 114th Street in East Harlem the toughest reservation in New York, bar none.

That exclusivity is what built Rao's enviable reputation. Its red sauce Italian food was first-rate and abundant, to be sure, but no celebrity chef was on board. The celebrities at this place were the patrons, and if you weren't part of what could loosely be defined as the New York cognoscenti, you weren't going to get in. From a restaurant operational perspective, having people clamoring to pay $18 for a dish of pasta topped with marinara sauce (meatballs, $11 extra) or $40 for a no-frills veal parmigiana must have produced a food cost for Rao's that was about as good as it gets in the full-service restaurant business. Patrons could get similar food—for less money—at dozens of other Italian restaurants in New York. But then they wouldn't be at Rao's.

So what would be the reaction to Rao's in Las Vegas, where, if they knew it at all, people knew it as a place famous for being hard to get into. If the Las Vegas branch has six times as many seats as the original, then what, exactly, is the attraction?

Rao's Caesars has plenty going for it as it tries to answer this question.

For one thing, there's the distinguished family ownership. Running the show in the current generation are Ron Straci, nephew of long-time headman Vincent Rao, and Frank Pellegrino, also Vincent's nephew. The family tapped Frank Pellegrino, Jr. to head the operation, while his wife, Carla Pellegrino, was appointed executive chef. You'd be hard-pressed to find a more accomplished and experienced family of restaurateurs than this one, acknowledged as without peer in the working-the-room style of hospitality.

Deep pockets, courtesy of the Caesars people, were a second plus. Rao's Caesars is a joint venture between Harrah's Entertainment, parent company of Caesars, and the Pellegrino family. A big chunk of the budget went to San Rafael, CA-based Engstrom Design Group (EDG). This top-shelf restaurant design firm—past customers include Four Seasons and Ritz-Carlton hotels, Wolfgang Puck, Bradley Ogden and Joachim Splichal—had a major problem to overcome. Rao's in New York was famous in part just because it was small, and sitting in it made guests feel special. How do you reproduce that cozy feeling in a 268-seat operation located near a casino?

EDG came up with a five-space package that strikes a pleasant compromise between the intimate setting of the original Rao's and the needs of a big-ticket Vegas operation housed in a sprawling place like Caesars.

The central room features a 25-foot domed ceiling and a bar. Off it are a pair of "Rao's Rooms," each with just 10 tables and 44 seats. A "Feast Room" seats 70 at its familystyle tables, and another 50 guests can be accommodated in "The Park," a lounge that gives guests the illusion they're sitting outside the original Rao's in New York's. And, providing an only-in-Las-Vegas touch, a poolside outdoor terrace offers seating for 62 near a bocce ball court. Whether guests want the old-school feel of the original or prefer a little more glitz, they can find it at the new Rao's.

Las Vegas critics were ready to scoff at the southern Neapolitan Italian dishes Carla's kitchen turns out. Her culinary resume was, to put it mildly, thin: She's a graduate of the French Culinary Institute whose only previous restaurant work had been done at Baldoria, the Rao family's theater district outpost in New York. But critics changed their tune after eating there. The critical consensus: Would that all restaurant nepotism turned out as well.

Her menu is much the same as the New York City original. "Our signature family dishes have kept Rao's at the top of New York's dining list for over a hundred years," says Frank Pellegrino, Jr., "and we are ecstatic to have the opportunity to share them with our guests in Las Vegas."

But would many people in Las Vegas really want to find out whether the Las Vegas Rao's stood up to all the New York hype? After all, the celebrities who frequent the original (Woody Allen, Billy Crystal, et al.) aren't likely to be found eating at Rao's Caesars. And if you're at Caesars and want a fine Italian meal, you could easily opt for Il Mulino or Bertolini's, both located there.

As it turned out, there was pent-up demand. As we write, Rao's is booked up roughly three weeks in advance, even at 268 seats per turn.

It's good news for restaurant operators. Many, many famed chefs have found additional fame and fortune in Las Vegas, as have concept developers like Richard Melman's Lettuce Entertain You Enterprises. It's heartening to see some of the great restaurant families get in on the action, as well. The Brennan family's Commander's Palace at the Aladdin may have been the first, but the Rao's connections are demonstrating what's available here for sharp restaurateurs, big deal chef in tow or not. Who's next?