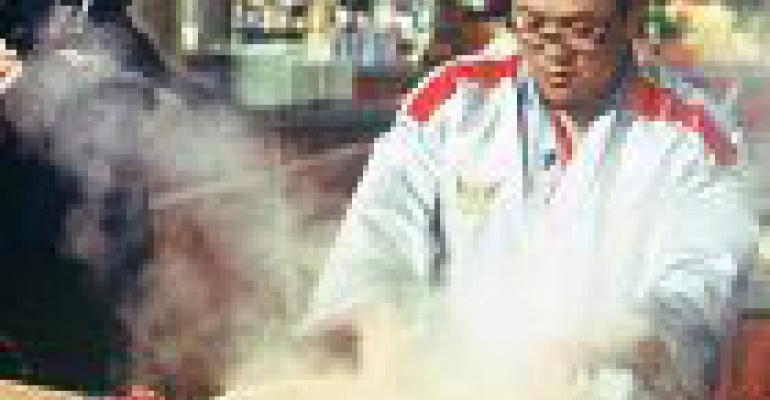 Wait a minute. Did we say forget Top Chef? Let’s give credit where credit is due. Season Number Three of this Bravo show is currently shooting in Miami, and its success has created the demand for more restaurant-related TV reality shows. Nearly four million viewers tuned in to the final Top Chef episode of Season Two to watch Ilan Hall win the competition. 2.879 million of them were adults in the coveted 18-49 demographic, meaning that basic cable show Top Chef beat out ABC’s PrimeTime in head-to-head competition.

Need evidence that the audience for chef shows is growing? The Season Two finale topped the Season One closer by 185 percent in adults 18-49 and 157 percent in total viewers. “Top Chef came into its own this season as one of cable’s biggest and most-talked about hits,” says Bravo president Lauran Zalaznik.

But is Top Chef a career-maker for the winner? Not much has been heard from Season Two champ Hall, who quit his job at Casa Mono in New York City just days before the Season Two finale aired. Season One winner Harold Dieterle, however, will be opening his own restaurant, Perilla, in late spring or early summer. He’s putting his $100,000 Top Chef prize into his place, which will be located in New York City’s West Village area. But a true power of the show was that Dieterle, a sous chef at Jimmy Bradley’s The Harrison at the time of his victory, became well-known enough to attract 13 additional investors without yielding control of his restaurant.

We’ll find out how large the appetite for reality cooking shows is this year when Season Three of Top Chef kicks off in June. Shortly thereafter—June 25—will come the third edition of Gordon Ramsay’s Hell’s Kitchen, previously a big ratings winner for Fox. Following closely in the fall will be the Food Network’s stab at the reality cooking show genre: The Next Iron Chef of America (that’s the working title right now). Still casting, it will offer professional chefs a way to show off their skills in an Iron Chef-like format, with the last chef standing gaining a regular slot on the Iron Chef America series. A fine prize by any standard, and the winner gets to keep his or her current restaurant job as part of the bargain. If you want to be a household name by the end of the year, find a way to get on this show and win.

But the true test of America’s fascination with cooking and the restaurant world will take place on an as-yet-unannounced date this fall when the Fox network debuts yet-another vehicle starring Gordon Ramsay, Kitchen Nightmares. It’s not a made-for-TV cooking competition; it’s a battle of life and death for real restaurants. This unscripted series will follow Ramsay, famous for holding three Michelin stars and a penchant for sprouting profanity, as he attempts to turn around a failing restaurant in just one week’s time. There’s no prize, per se. Either the restaurant continues on its downward spiral or its owners and managers suddenly have a viable operation on their hands.

Ramsay has previously done a four-episode series of Kitchen Nightmares for the BBC, and it later ran on BBC America. This show casts Ramsay in a different light. He’s the villain on Hell’s Kitchen; he’s the hero on Kitchen Nightmares. Yes, there’s still plenty of profanity, and he’s still got a short fuse. But restaurant owners and operators will likely find themselves nodding in agreement as Ramsay attempts to straighten out screwed-up restaurants, and it will become immediately clear how Ramsay built his multi-restaurant empire so fast. The BBC versions showed that no matter the operation or where it’s located, Ramsay is razor-sharp about what will or won’t work, and how fast a restaurant has to be turned around if it is to remain in business.

The ratings for Kitchen Nightmares will tell us a lot about how big America’s fascination with the restaurant industry has become. If this one is a hit, the sky’s the limit for not just cooking reality shows, but restaurant reality shows of all stripes. It’s gotta be good for business.