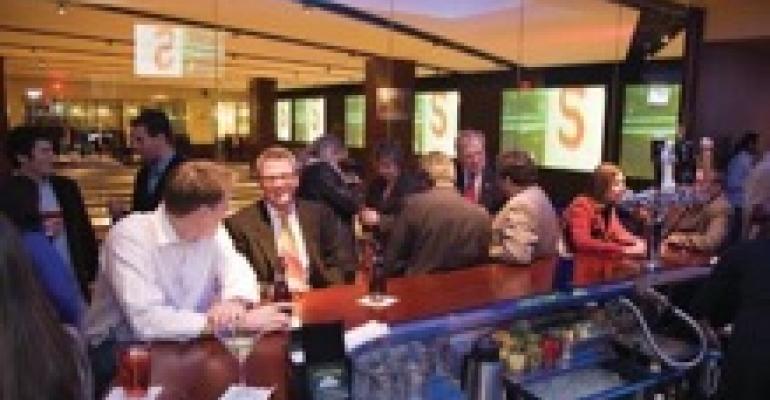 Life in the Fast Lane

We can't call the new Corner Alley bowling alley/restaurant/martini bar complex in downtown Cleveland's E. 4th Street neighborhood a ground-breaking concept. Chicago's 10 Pin Lounge, owned by the Harry Caray's Restaurant group, got there first. So did Lucky Strike Lanes, whose 13 units stretch from Boston to Los Angeles. These operations take the basic bowling alley concept upscale, adding a hoppin' bar scene and on-trend dining area to the mix. It's a bigger-than-normal upfront investment that, with three revenue streams, can produce a bigger-than-normal payout if everything goes right.

It's the connections that make Corner Alley worth watching. You may not know the name of the company that runs it—Trifecta Management Group, based in Agoura Hills, CA—but you've probably heard of its principals: Ron Lam, Bruce Nussbaum and Michael Auger. They're the trio who once ran GameWorks, the restaurant/interactive entertainment concept where arcade-quality video games were supposed to put places like old-school bowling alleys right out of business. Now these three are front and center on the emerging bowling-based entertainment corner of the restaurant business.

What happened at GameWorks? It was hot for awhile, but games today are something people play at home on their PS3, Xbox 360 or Nintendo Wii units or on the Internet over their broadband connection.

You can't bowl at home, however, and that's a key part of Corner Alley's strategy. They're going after people who want to get out of the house and do more than just stare at a flat panel TV in a sports bar when they do. Lam says the concept caters "to urban professionals, who we see as our key market: people looking for a fun night out with great food, great drinks and a party atmosphere, who aren't embarrassed if they roll a gutter ball."

That great food comes from the 100-seat 4th Street Bar and Grill, located inside Corner Alley. Todd DiCillo is the executive chef who presides over the exhibition kitchen and its wood-burning oven.

Corner Alley opened in early December and booked a number of group events right away. Why not? A secluded party area has its own four lanes for bowling, plus dedicated food and drink amenities.

Trifecta is already involved with another bowling project: Splitz Bar and Grill, located inside Pin Strikes Entertainment Center in Stockbridge, GA. It's a 28-lane facility that's being retrofitted into a hip bowling center.