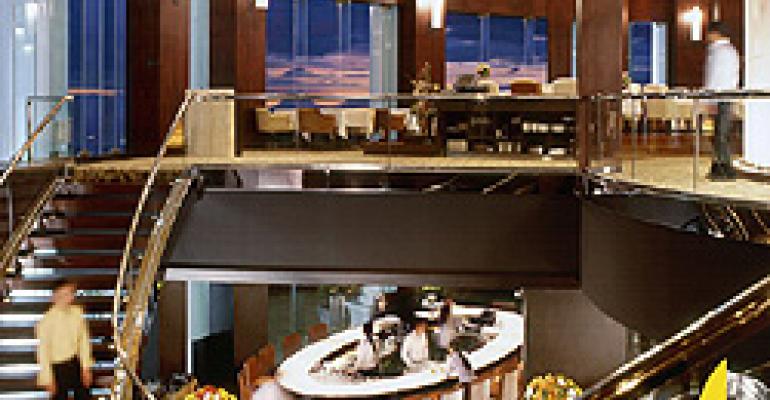 Then-New York Times food critic Claiborne didn’t personally pay the $4,000 tab on his legendary meal at St. Denis in Paris; American Express did. The credit card company had donated a dinner for two at any restaurant that accepted the American Express card to a charity auction, and Claiborne won it with a $300 bid. Legend has it that the company expected the winner to run up a tab of as much as $500, and were staggered when the $4,000 bill came through. Even 32 years later, $4,000 is a lot to pay for a meal.

How did Claiborne do it? First he went to Paris. Then he ate at Saint Denis, a no-Michelin star restaurant with an enviable wine list It was Claiborne’s wine selections that really broke the bank. Among other choices, he downed a 1929 Romanee-Conti, a 1928 Chateau Latour and an 1835 Madeira. The meal featured the usual big-ticket ingredients: foie gras, truffles, lobster, caviar and the like.

All of which were again on the menu when six chefs from Europe, each a holder of three Michelin stars, set up temporary shop inside Bangkok’s luxurious Lebua hotel. Many of the wines, although more recent vintages, came from the same vineyards as supplied the Claiborne meal.

Here are the food and wine pairings the 40 tuxedo-clad and diamond-wearing guests consumed at their meal, served at the Mezzaluna restaurant space on the 65th floor of the Lebua.

Ingredients were flown in at the last minute from 35 cities around the world. The wine tab topped $200,000 for six bottles each of the 10 wines served.

The six-chef lineup featured Taillevent’s Alain Soliveres, Antoine Westermann of Strasbourg’s Le Buerehiesel and Annie Feolde of Enoteca Pinchiorri in Florence, Italy. The chefs cooked a series of lunches and dinners during the three days prior to the big event.

Bangkok locals, spoiled by easy access to the world’s best street food, thought the event was exorbitantly priced. "They may have lobster, but we have prawns," restaurant owner Pornpilai Chareonsimaporn told the New Zealand Herald. "The only thing they’re paying for is some fancy table decorations."

"We’re not selling a meal," Mezzaluna manager Deepak Ohri countered. "We are selling the whole experience. You cannot put a value on the experience," he said.

But at least it was a good gig for the chefs. "It’s surreal, the whole thing’s surreal," said Taillevent chef Soliveres. "To have brought together all these three-star Michelin chefs for so many people is an incredible feat."