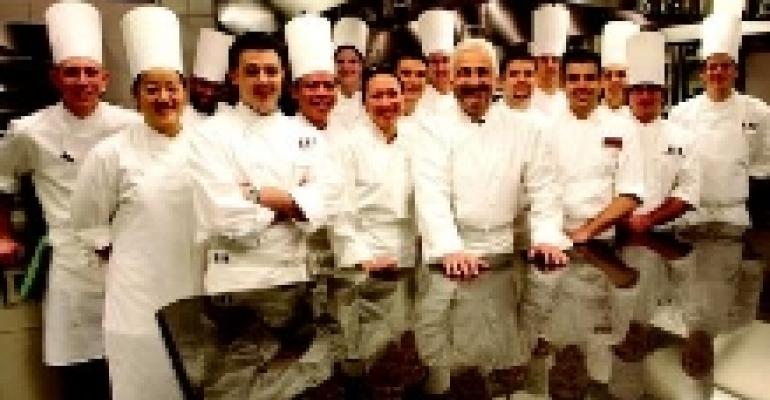 No, he's not the first big-deal French chef to set up shop in Las Vegas. But Guy Savoy is the only one to attempt what some say is the impossible: replicate the three-Michelin-star dining experience he presents in Paris at a restaurant located 5,000 miles away in the middle of the Nevada desert. The interior, the kitchen, the management, the menu, the look, the feel—all of it is meant to be the identical to Savoy's flagship restaurant at 18 Rue Troyon in Paris.

This continent-hopping exercise would be a daunting challenge for any chef, no matter how accomplished. Yet those who've dined at Restaurant Guy Savoy since it opened in late May on the second floor of the new Augustus Tower at Caesars Palace say the 52-year-old chef has pulled it off.

Savoy, who operates five restaurants in Paris, had other concepts to pick from. Why did he go with the one that would be the hardest to reproduce? That's what Caesars wanted: a clone of the world-renowned Restaurant Guy Savoy. Their deal gave Savoy the financial wherewithal to build an evenbetter version in Las Vegas. But there were other risks.

For one thing, Savoy knew he'd be going head-tohead with fellow three-Michelin-star chefs Alain Ducasse and Joel Robuchon. At Mix, located on the 64th floor of the Mandalay Bay, Ducasse went with a greatest-hits concept that featured popular menu items from his other concepts. Robuchon's deal at the MGM Grand was a two-fer: Joel Robuchon at the Mansion, Robuchon's comeback in fine dining after he gave up on that genre back in 1998; and the more casual L'Atelier de Joel Robuchon elsewhere on the property.

Savoy went in a different direction. To design his restaurant, he brought in Jean-Michel Wilmotte, who did the original Restaurant Guy Savoy in Paris (not to mention the new Louvre). And he tapped family members to run the place. The general manager is Franck Savoy, Guy's son, who has previously operated two other Guy Savoy restaurants in Paris. Franck's wife Laura, who directed marketing and sales for Savoy's Paris restaurants, now handles those duties plus private dining sales in Las Vegas.

Franck and Laura Savoy came to Las Vegas a year before the restaurant's opening to make sure that everything that went into the Caesars Palace venture reflected the chef's intentions. That meant the best people and the best products, no substitutes allowed.

This team—Guy Savoy says he'll be spending roughly 70 days a year in Las Vegas— works out of two kitchens, one for preparation, another for service. And their work load seems manageable. The 75-seat operation employs 60 full-time staffers, and the dining room schedule—5:30 p.m. to 10:30 p.m. Wednesday through Sunday—should prevent burnout. But still, how do they make money doing this?

Well, they probably don't. "If I wanted to make money in the U.S.," Savoy told the L. A. Times, "I would have opened a brasserie with 600 covers. Of course, we're doing a business here, but the notion of profitability was completely forgotten."

Translation: Caesars gave him a sweet contract and it's OK if the place just breaks even.

So what's on the menu? It's a 90 percent replica of the one at Restaurant Guy Savoy in Paris, with the 10 percent variation due to the non-availability of a few ingredients here in the U.S. The idea is to reproduce the three-star experience, and many items on the opening menu are exactly the ones you'd get if you went to Restaurant Guy Savoy in Paris.

Early returns from the critics indicate that the new restaurant approaches the three-star level. The prices certainly do. Starters include oysters in ice gelee ($40); blue fin tuna tartare "Toro and Maguro" with caviars, poached egg and scalding shellfish vinaigrette ($80); and artichoke and black truffle soup with toasted mushroom brioche and black truffle butter ($68).

The entree list offers crispy sea bass with delicate spices ($75) and roasted duckling with citrus-scented turnips ($110). It's $20 to sample the cheese cart, desserts go for $22 apiece and the 10-course tasting menu will set you back $290, plus any vintages you select from the 1,000-bottle wine wall.

Savoy's Parisian clientele— business people on expense accounts—could handle this level of pricing. Will the tourist crowds in Las Vegas sit still for it? Why not? For the closest thing you can get to the European three-star experience, it may turn out to be a bargain.