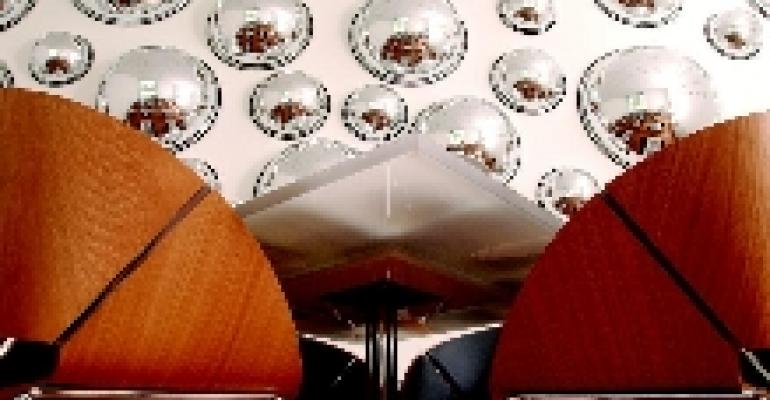 It's the career path aspiring chefs dream about. Start with a low-profile gig in a high-profile kitchen, absorbing as much knowledge as you can. Then spend time in Europe, working alongside the masters there. Next, come back to the U.S. and snag your first executive chef post. Build your name there for a year or two and then make the next leap: chef/partner, cooking the kind of food you love at a restaurant where you've got a piece of the action and call most of the shots. The final step: become a chef/consultant, where all you have to do is come up with cool menus for other peoples' venues and maybe help design their kitchens.

So does anyone's life really go this smoothly? Shaun Doty's did. He made it all the way to the consultant level by age 36. Yet he went back into the kitchen this fall, and now he's somebody else's employee again with many new layers of bosses. His job: executive chef at Table 1280 Restaurant and Tapas Lounge, the glitzy new restaurant inside Atlanta's Woodruff Art Center.

Does this qualify as a fall from grace? Hardly. Doty's just one of the first chefs to figure out that a museum setting has become a great place to produce interesting food—and that museums will pay plenty to attract a celebrity chef who can deliver it. He's following in the footsteps of Gabriel Kreuther, the chef whose French-American cuisine at The Modern in New York City, located inside the newly revamped Museum of Modern Art, convinced Esquire to name the place 2005's Best New Restaurant of the Year.

Will Table 1280 earn similar honors for 2006? It's got a shot with Doty in charge. His career path is the exact one other chefs dream about.

He went from culinary school at Johnson & Wales in Charleston to working for Guenter Seeger at the Ritz-Carlton Buckhead in Atlanta, then opted for European gigs, including a stint at three-Michelin-star Comme Chez Soi. Then he became executive chef at Atlanta's hip Mumbo Jumbo moving, in 2003, to a post as chef/partner at Atlanta's acclaimed and perpetually busy MidCity Cuisine. His initial consulting job was for Rex, a restaurant located inside the exclusive rock star hangout Marlin Hotel in Miami Beach.

It's no wonder his name came up when the trustees at Atlanta's Woodruff Arts Center were planning their $178 million expansion. The Woodruff is the nation's largest performing and visual arts center (The High Museum, the Atlanta Symphony, a pair of top-notch theaters and other arts venues are all located here). They were going first-class on every other aspect of the center; the food had to match that standard.

It's a formula museum operators across the country are beginning to embrace: great food plus famous chef equals profit center. Even the best-endowed, best-attended museums are looking for extra revenue these days.

This represents a change in thinking on the part of both museum operators and sophisticated restaurant operators. Museum dining has typically been an adjunct to the larger cultural purpose, the thought being that the museum's programs would bring in the people and the foodservice operation was a nice amenity to offer patrons between gallery visits.

Now the idea has become that if the museum can have a hot restaurant run by a bigname chef, the museum and the restaurant will each attract extra business for the other.

It's a smart concept. But how many operators want to do business in an institutional setting where the landlord is a bunch of museum trustees? And how many prominent chefs want to cook in a set-up like this?

We don't know the answer. But look at who's involved in museum dining right now. It must be a good opportunity.

The Modern at MOMA in New York City is operated by Danny Meyer's Union Square Hospitality Group. It's a departure for them, but you can bet their business-and critical success will cause operators in other cities to give serious consideration to similar opportunities. And the chef there sure got noticed.

Meyer and USHG come from an independent restaurant background. In Atlanta, Doty is working for Restaurant Associates. This corporate giant's Managed Services division serves more than 500,000 meals a day, and it dominates the museum/performing arts center niche. The company produces a uniformly high dining experience in many venues. But are hip restaurants something RA can pull off?

They can if they keep hiring guys like Doty. Table 1280 seats 240, split between a pair of dining rooms. A tapas bar in the center divides the two. It offers bright, contemporary food that's big on seasonal ingredients. Entrees include roast organic chicken with stone-ground cheddar grits and baby Brussels sprouts; and hot smoked wild salmon with watercress sweet corn broth. Tapas highlights are a grilled octopus, black chickpeas and fennel salad; and piquillo pepper stuffed with spicy crab and mango. Museum-goers can even get seviche.

Great food is a given with Doty. But Atlantans wondered why he decided to take the job.

"I'm coming from a place where I always called the shots to being one voice in a group of collaborators," the chef told the Atlanta Journal-Constitution.

"But the payoff for me is amazing. I'm involved with a worldclass organization. This is a natural evolution of my career."

Could it also be a natural evolution for you?