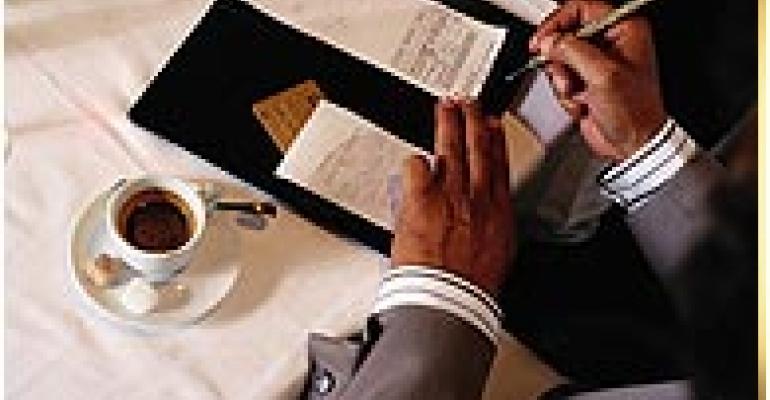 TEMPEST IN THE TIP JAR

Some accused Keller of greed when he imposed the 20 percent charge, which raised the price of Per Se's $175-per-person meal to $210. But he told the press that retention issues were what convinced him to make the move. Among the last straws were the departure of one key Per Se kitchen staffer and a request by another to come out of the kitchen and wait tables so he could pay off some personal bills.

Big, big, problem for Keller. Back-of-the-house turnover is something you can't have when you're the proprietor of a world-class restaurant where consistent perfection is supposed to be a given.

But it was hard to disguise the fact that at Per Se, as at many, many other restaurants, the waitstaff was raking it in and the kitchen staff wasn't. Theoretically, kitchen workers are considered to have the more glamorous jobs, sharing in the halo effect of working for someone like Keller. Chefs and their chief underlings are the stars; waitstaffers are interchangeably anonymous. However, that's not how the money shakes out at the end of the night. Yes, the cooks get the better line for their resume. But that doesn't help them pay their bills today.

The result: a condition known status-income disequilibrium. It's a touchy situation at any full service restaurant, one that is exacerbated when the place is a roaring success like Per Se. Some employees make way more money than others do, yet everyone has to pay the stratospheric rents that prevail in a place like New York City.

'We realized the imbalance of earnings and that a change needed to occur in order to provide everyone in the restaurant an opportunity to pursue their dreams," Keller told reporters."

Fair enough, except not many Per Se waitstaffers were dreaming of working in a flat-fee service charge environment that yields the same hourly wage to everyone no matter how dazzling their service.

"Some of the dining room staff is understandably concerned," Keller said. "They're going to be compensated in a new way that they're not used to."

The deal now: Everyone gets a salary every week of the year, even if the restaurant is closed. It's a system that's been in place at Keller's French Laundry in Yountville, CA, for the past seven years. The service fee there: 19 percent.

Another noted California restaurant, Chez Panisse, has had a service charge policy for a long time, too. Once 15 percent, it's 17 percent now. A two-percent raise last year enabled the restaurant to provide health insurance for its employees. Chez Panisse's Alice Waters told attendees at last fall's Association of Food Journalists conference that the system is designed to create some sort of balance between front and back-of-the-house compensation.

Keller told the same convention that's also why he installed a flat fee at the French Laundry and then later at Per Se. He said that, prior to making the switch, front-of-the-house workers made three times as much as someone of similar experience and responsibility did in the kitchen. Now, it's about a two-to-one ratio. Resistance was stiff among waitstaffers when this scheme was first imposed, but their pain was eased when they learned they'd still draw salary when the French Laundry is closed.

It's interesting that Per Se had turnover problems at all. It's a prestigious place to work, and it already offered employee perks most restaurants can only dream about. Check out how Per Se described its benefits when it advertised briefly for help on website Craigslist.com in New York City: "We offer three weeks paid vacation a year during our annual closures, full medical, dental and vision benefits after 90 days and 401(k) contribution opportunities.

A sweet benefits package, especially by restaurant industry standards. And offering one like it at your place, funded by a flat-rate service charge, might make your life easier. But how would customers react? Our advice: Don't sweat it. Maybe you shouldn't worry about tipping schemes because it appears that customers don't.

That's a conclusion that can be drawn from a recent study conducted by Sandelman & Associates. Released in mid-December, "Tipping in Restaurants" found that people feel compelled to tip at restaurants even when scant service or personal interaction is part of the experience.

"Tipping is common at fast casuals despite the fact that these restaurants do not provide table service and offer food that, while perceived to be of higher quality than fast-food, is not as high quality as casual, family or fine dining restaurants."

OK, just how often do customers drop change in the tip jar? Forty-five percent of Sandelman's survey respondents said they tipped all or most of the time at eat-in dining, even at fast casual restaurants. Eleven percent said they tip all or most of the time at carryout fast-casual occasions. Carryout tip frequency for family dining was 14 percent; for casual dining, 19 percent; and for fine dining, 24 percent.

How much are customers kicking in? Survey respondents reported an average of 14 percent for satisfactory service for eat-in fast casual occasions, as compared with 18 percent at higher-level dining. Carryout tips are four to six percentage points lower across all restaurant types--still mighty high when you consider the low level of customer-employee interaction.

Can this behavior be explained? Not exactly, says Cornell School of Hotel Administration tipping guru Michael Lynn. "Tipping is an interesting behavior because tips are voluntary payments given after services have been rendered," he says. "Consumers rarely pay more than necessary for goods and services. Tipping represents a multibillion-dollar exception to this general rule. It is an exception that raises questions about why people tip."

Answers will always be elusive, but Lynn argues that a better understanding of why people tip would help restaurant managers make better decisions about tipping/service fee issues.

Translation: If you've got issues in these areas, it might be time to give the service charge method a try. Granted, it won't solve all your problems. For one thing, you'd probably have to ride herd on waitstaffers who no longer would have a strong personal incentive to turn tables. But gains in staff retention in both the front and back of the house could well outweigh these impacts.

Keller's situation at Per Se is unique. But his ideas about service fees might not be.